A doomsday ending to climate change is not inevitable, but the situation is becoming ever more desperate. Without immediate and drastic action, reminiscent of efforts during World War II, a new analysis predicts that by 2050, climate change could become an “existential threat to human civilisation” that can never be undone.

The new report, co-written by a former executive in the fossil fuel industry, is a harrowing follow-up to the Breakthrough National Centre for Climate Restoration’s 2018 paper, which found that climate models often underestimate the most extreme scenarios.

Endorsed by former Australian defence chief Admiral Chris Barrie, the message is simple: if we do not take climate action in the next 30 years, it is entirely plausible that our planet warms by 3°C and that human civilisation as we know it collapses.

Ecosystems will collapse, including coral reefs, the Amazon rainforest and the Arctic. North America will suffer from devastating wildfires, heatwaves, and drought. The great rivers of Asia will be severely reduced as will water availability right across the world, affecting roughly 2 billion people.

Rainfall in Mexico and central America will fall by half and agriculture will be nonviable in the dry subtropics. Semi-permanent El Nino conditions will prevail, and deadly heat waves will persist in some areas for more than 100 days a year. More than a billion people will be displaced.

“This scenario provides a glimpse into a world of ‘outright chaos’ on a path to the end of human civilisation and modern society as we have known it,” the authors write, “in which the challenges to global security are simply overwhelming and political panic becomes the norm.”

The only solution, they argue, is a revolutionary, worldwide zero-carbon energy, industrial, and economic strategy, focused less on climate models and more on extreme scenario planning.

“To reduce this risk and protect human civilisation, a massive global mobilisation of resources is needed in the coming decade to build a zero-emissions industrial system and set in train the restoration of a safe climate,” the report explains.

“This would be akin in scale to the World War II emergency mobilisation.” 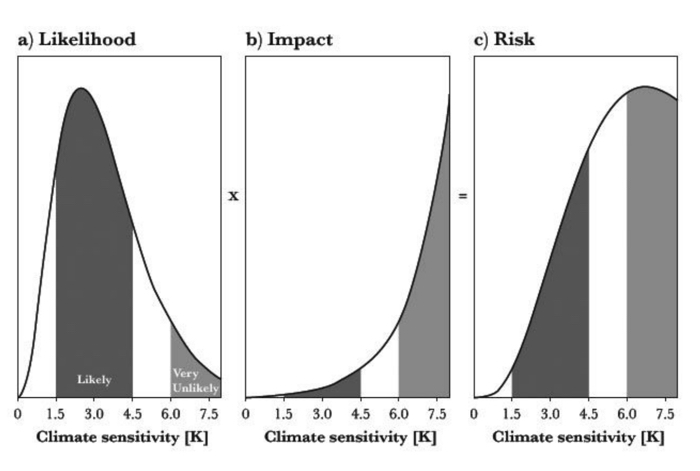 Lower likelihood events at the high end of the probability distribution have the highest risk, the authors say (RT Sutton/E Hawkins)

While climate models are useful for research, the paper points out that these tools often err on the side of caution and focus on middle-of-the-road outcomes. By ignoring the high-end possibilities, we are therefore ill-prepared for an unexpected catastrophic event, one which we really should have seen coming.

This might sound overly dramatic or alarmist, but the probability of this happening is likely higher than we think.

Most climate models today are conservative and do not take into account tipping points and positive feedback loops that could amplify warming, like the release of greenhouse gases from thawing permafrost, the loss of West Antarctic glaciers, and reduced ocean and terrestrial CO2 removal from the atmosphere.

With a runaway event like this, climate change will not present as a normal distribution, but instead will be skewed by a fat tail – indicating a greater likelihood of warming that is well in excess of average climate models.

Under a business-as-usual scenario, the authors explain, warming is set to reach 2.4°C by 2050. If feedback cycles are taken into account, however, there may be another 0.6°C that current models do not assume.

“It should be noted,” the paper adds, “that this is far from an extreme scenario: the low-probability, high-impact warming (five percent probability) can exceed 3.5–4°C by 2050.”

The policy paper is published by the Breakthrough National Centre for Climate Restoration.