Tornadoes have been popping up every day in the US as if coming off an assembly line. They’re part of an explosion of extreme weather events, including record flooding, record cold and record heat.

Wednesday brought more of the same, with tornado watches in the Midwest and Atlantic seaboard and 37 million Americans facing an “enhanced” risk of severe weather, according to the National Weather Service.

All of which raises the question: Is this climate change, or just an unusually bad year?

For years, scientists have warned that climate change caused by human activity – primarily the burning of fossil fuels and the spike in atmospheric greenhouse gases – would make extreme weather events more likely.

But tornadoes have never fit neatly into the climate change narrative. They’re eccentric and quirky. Until this year, the US was in something of a tornado drought.

The immediate driver of the violent weather is the jet stream, the powerful winds at high altitudes that sweep west to east across North America. The jet stream since May 14 has created conditions ripe for twisters.

Seven deaths have been reported so far in the tornado assault of May. That’s a low death toll compared to some tornado seasons, but the steady, percussive nature of the storms – the daily pounding – has been anomalous.

“Every day, somewhere in the United States is getting pummeled by tornadoes and hail,” said Victor Gensini, a professor of meteorology at Northern Illinois University.

There’s plenty of water in the mix, too. The Mississippi River is projected to reach 14 feet (4.2 meters) above flood stage in St. Louis, the second-highest on record.

The river has been above flood stage at Vicksburg, Mississippi, since February 17, the longest stretch of flooding since 1927, the year of the famed “Great Flood”.

And the Arkansas River is rising rapidly and poised to approach record flood stages in Tulsa and other cities.

There’s been too much rain and not enough places to put it.

Meanwhile it’s been so cold and wet in California that the ski resort of Mammoth has seen more than two feet of snow this month and may stay open until August.

In the usually broiling desert city of Phoenix on Memorial Day, the thermometer topped out at a pleasant 79 degrees Fahrenheit (26 degrees Celsius), which is 19 degrees F below average. The Deep South would love to be so lucky: Temperatures have hit 100 F (38 C) in many cities, breaking records.

Savannah has hit 100 more times this year than Phoenix, something that’s never happened since people began tracking such things. The high of 102 degrees F in Gainesville, Florida, on Monday was higher than any temperature ever recorded in May.

The jet stream shapes the high pressure and low pressure systems that control the weather in any given location. Normally it flows west to east in temperate latitudes in a fairly reliable manner.

But lately it has fallen into a roller coaster pattern. It’s dipping, forming deep troughs. The result is weather that’s wildly different from west to east, with regions of extreme instability and too much drama.

Worse, the jet stream appears to be stuck in this sinuous pattern. The weather has become not merely extreme but also inert, stubborn, persistent, tiresome, tedious – pick your adjective.

Between the cold weather in the West and the heat wave in the Southeast lies a huge swath of the United States that’s primed for tornadoes.

“The jet stream is the thing that creates and steers individual storms and also sets up large-scale patterns. What we’re seeing now that’s so unusual is that the large-scale pattern, all the way from the middle of the Pacific Ocean to the Atlantic is stuck,” said Jennifer Francis, senior scientist at the Woods Hole Research Center.

Francis believes there’s a climate change signal in the extreme weather, including the tornadoes. Extreme warmth in and around Alaska, along with the reduction of Arctic sea ice, affects the flow of the jet stream, she said.

A blob of warm air, and high atmospheric pressure, near Alaska has been fingered by many meteorologists as a flashing red light that something is very different about climate these days

“We can’t say that the rapid Arctic warming is causing this particularly pattern, but it certainly is consistent with that,” Francis said.

Extreme weather can happen with or without climate change. Moreover, land-use changes can make communities more vulnerable. There are more people and property in the line of fire. Teasing out a climate change signal from a natural disaster is invariably complicated.

But the transforming atmosphere changes the odds in favor in heavier downpours, longer droughts, and so on. Sea level has risen in the past century, which leads to greater coastal flooding. And warmer oceans can supercharge hurricanes.

“Attribution” science is a young field, and in the past decade there have been a smattering of research papers showing links between global climate change and specific, extreme weather events, such as the historic flooding from Hurricane Harvey in Texas two years ago. 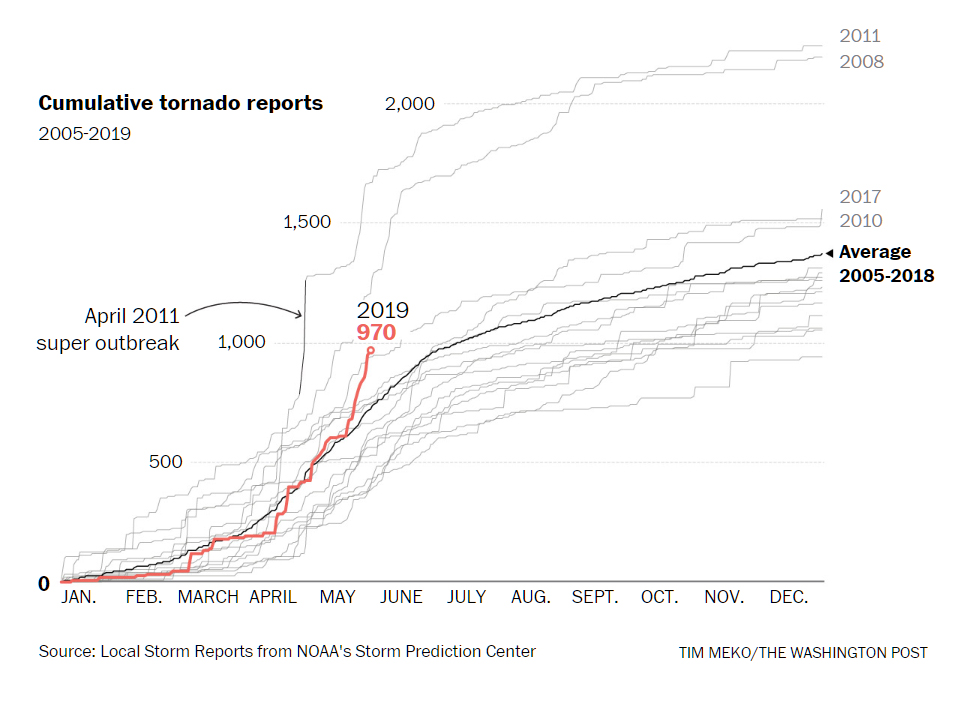 If there’s a signal in the ambiguous tornado data, it’s that there’s more variability from year to year in the number of tornadoes. Expect the unexpected seems to be the meteorological conclusion.

Tornadoes emerge from a time-tested atmospheric recipe. Moist air flowing north into the Midwest and the Southeast US gets topped by a layer of hot, dry air from the desert southwest. (“That hot dry air mass is like keeping a lid on a boiling pot of water,” Gensini said.)

On top of that is cold air. This setup triggers the formation of thunderstorms, which feature hot air rising tens of thousands of feet, forming cumulonimbus clouds. These storms can be destructive even without rotational winds.

Asked if he subscribes to the idea that the warming Arctic is playing havoc with the jet stream, he said, “I think that’s a very plausible scenario.” But he said he’d like to see more attribution studies before he embraces the hypothesis.

Forecasters said Wednesday that this bad run of tornadoes and other forms of extreme weather is almost over. The jet stream is edging back toward normalcy, and the experts say everyone should just hang tight for another day or two. June will likely be pacific by 2019 standards.

Scientists Discover An Immense, Unknown Hydrocarbon Cycle Hiding in The Oceans
Scientists Just Broke The World Record For The Most Powerful Stable Magnetic Field
The Star Betelgeuse Went a Little Dim in 2019. Astronomers Think They Know Why
Researchers in South America Discover a New Species of Tiny but Tough Dinosaurs
Many Cat Lovers Are Giving Their Cats Unwanted Affection, Study Suggests