For thousands of years, the chief danger of Europe’s most active volcano has been the threat of something akin to hellfire. In the future, the peril could be the exact opposite: water.

That’s because Mount Etna, on the Italian island of Sicily, is slowly, inevitably sliding into the Mediterranean Sea – a creeping movement scientists have observed for decades. But new research suggests this colossal phenomenon could be a greater hazard than anyone realised.

“The entire slope is in motion due to gravity,” explains geophysicist Heidrun Kopp from the Geomar Helmholtz Centre for Ocean Research in Germany.

“It is therefore quite possible that it could collapse catastrophically, which could trigger a tsunami in the entire Mediterranean.”

While the exact cause of Etna’s slow sliding (at an average rate of 14 millimetres or 0.55 inches per year) has never been fully understood, scientists previously thought the shift might be due to a build-up of magma inside the volcano.

But that’s not what the new research suggests.

To investigate, in April 2016 the researchers set up a network of five underwater transponders to continuously monitor seafloor displacement along the submerged southern boundary of Mount Etna.

Every 90 minutes, each of these geodetic stations would ‘ping’ one another with an acoustic signal. Any changes in the amount of time taken for the signal to be picked up would indicate transponder movement due to Etna’s shifting south-eastern flank – with the system precise to displacements of less than one centimetre.

For a year, nothing happened.

Then, in 2017, Etna’s shifting underwater flank moved by 4 centimetres (1.6 inches) between May 12 and May 20 – a movement that corresponded to an eight-day-long aseismic fault motion in the region (a so-called ‘slow slip event‘, where a shift occurs along a fault without an earthquake happening).

The sudden displacement – occurring underwater and so far from Etna’s fiery heart – means the volcano’s slow slide into the Mediterranean is episodic, and is primarily driven by instability due to gravitational forces, rather than seismic rupturing spurred by magma dynamics hidden within the volcano (which probably isn’t helping either). 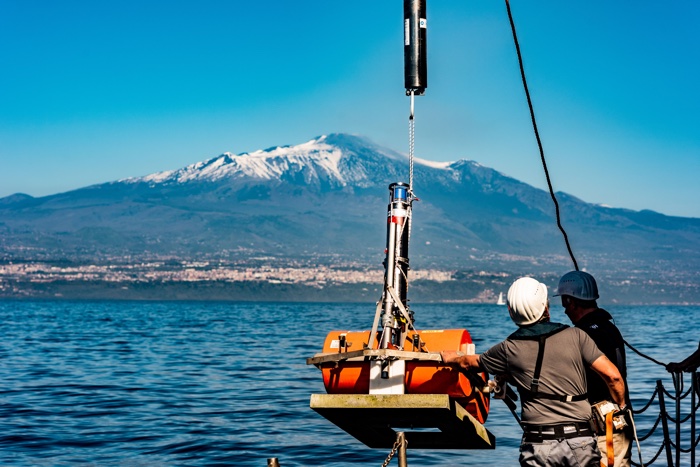 In any case, in the long term at least, this is not good news.

“In the case of Mount Etna, our shoreline-crossing deformation analysis implies a greater hazard for flank collapse than previously assumed, as deep-seated gravitational sliding can potentially lead to catastrophic collapse,” the authors write in their paper.

While there’s no suggestion such a catastrophic collapse will occur any time soon – nor is there any way of telling just when one might take place – the researchers warn that Etna’s stature (and idyllic seaside location) could spell disaster one day.

“Mount Etna is huge. It’s over 3,000 metres (9,843 ft) high and it rises up from below sea level,” first author and marine geodynamicist Morelia Urlaub told The Independent.

“You can think of a slow landslide at the moment… but there is a danger that it could accelerate and form a landslide that moves really fast into the sea.”

If that happens, this gigantic tower of mountain and magma could cascade right off the Sicilian seaside into the Mediterranean, triggering a disastrous tsunami that could engulf the whole region.

How bad it would be is anyone’s guess, and as the team acknowledges it might not happen for another 100,000 years, but if history is any guide, it’s quite possibly only a matter of time before Etna’s slow shift becomes something much more dramatic.

“We know from other volcanoes in the geological record that these have collapsed catastrophically,” Urlaub told Live Science.

“There is a hazard. We just have to keep an eye on Etna’s flank and how it is moving.”

The findings are reported in Science Advances.

Robot Shows It’s Possible to Swim Through The Emptiness of a Curved Universe
Plants Have Been Keeping a Secret From Us About How Thirsty They Actually Are
Researchers in South America Discover a New Species of Tiny but Tough Dinosaurs
The Star Betelgeuse Went a Little Dim in 2019. Astronomers Think They Know Why
Minor Google Meltdown Exposes The World’s Utter Reliance on a Single Tech Company