Of all our planet’s continents, we know the least about the icy landmass of Antarctica. Now, scientists have used satellite imagery to peer into Earth’s tectonics, revealing the hidden structures of Antarctica as part of their work.

Due to its remote location and abundance of ice, charting the geological characteristics of Antarctica is tricky, but the Gravity Field and Steady-State Ocean Circulation Explorer (GOCE) satellite can see what other satellites can’t – by precisely measuring the pull of Earth’s gravity to map out hidden terrain.

GOCE crashed out of orbit after running out of fuel in 2013, but scientists are still poring over the data it collected. The researchers say it offers new insights into how Antarctica was formed, and how plate tectonics can function, as you can see in the video below.

“In East Antarctica we see an exciting mosaic of geological features that reveal fundamental similarities and differences between the crust beneath Antarctica and other continents it was joined to until 160 million years ago,” says one of the team, Fausto Ferraccioli from the British Antarctic Survey.

By combining GOCE readings with seismological data, the researchers were able to create 3D maps of Earth’s lithosphere, made up of the crust and the molten mantle beneath. That lithosphere includes mountain ranges, ocean backs, and rocky zones called cratons – the leftovers of ancient continents embedded in continents as we know them today.

“The satellite gravity data can be combined with seismological data to produce more consistent images of the crust and upper mantle in 3D, which is crucial to understand how plate tectonics and deep mantle dynamics interact,” says one of the researchers, Jörg Ebbing from Kiel University in Germany.

The GOCE satellite circled our planet for over four years, from March 2009 to November 2013. During that time it got unusually close to Earth – an altitude of just 225 km (140 miles) – to maximise the accuracy of its measurements.

The International Space Station, by comparison, is about two times farther away from Earth’s surface. 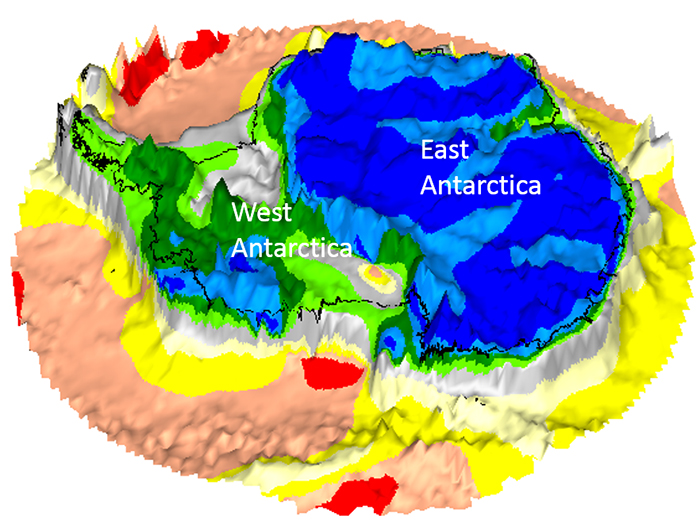 Among the findings from the new study was the discovery of a thinner crust and lithosphere under West Antarctica compared to East Antarctica (above) – the latter has a mosaic of older cratons interspersed with thinner regions of rock, similar to India and Australia, which it was once joined to.

And the data is useful for more than just tracing the remnants of ancient continents across the past 200 million years: It can be used to help figure out how ice sheets above the underlying terrain might react to warmer temperatures.

With so many variables to consider, predicting how ice melt might progress across Antarctica is a real challenge, so any help scientists can get will be welcome. GOCE is still proving its use long after its mission ended.

“These gravity images are revolutionising our ability to study the least understood continent on Earth, Antarctica,” says Ferraccioli.

The research has been published in Scientific Reports.