Our society has collectively decided that some weather is better than others. When was the last time 50 degrees Fahrenheit with rain was described as nice weather?

How often do tourists flock to destinations where it’s 100 degrees with suffocating humidity?

While it’s admittedly hard for even two people to agree on what ideal weather is, we’ve made an attempt to set up some goal posts and determine what parts of the United States have the most days with nice weather and which have the least.

The criteria we used make the assumption that people prefer days with moderately warm temperatures, at least partial sunshine, a light breeze, low humidity and no precipitation. In other words, we’re highlighting comfortable days that don’t require a jacket, when you don’t feel like you’re stepping into a sauna, and when you won’t get poured on or blown away.

After crunching the numbers, we present to you the cities with the most and fewest “nice days” each year: 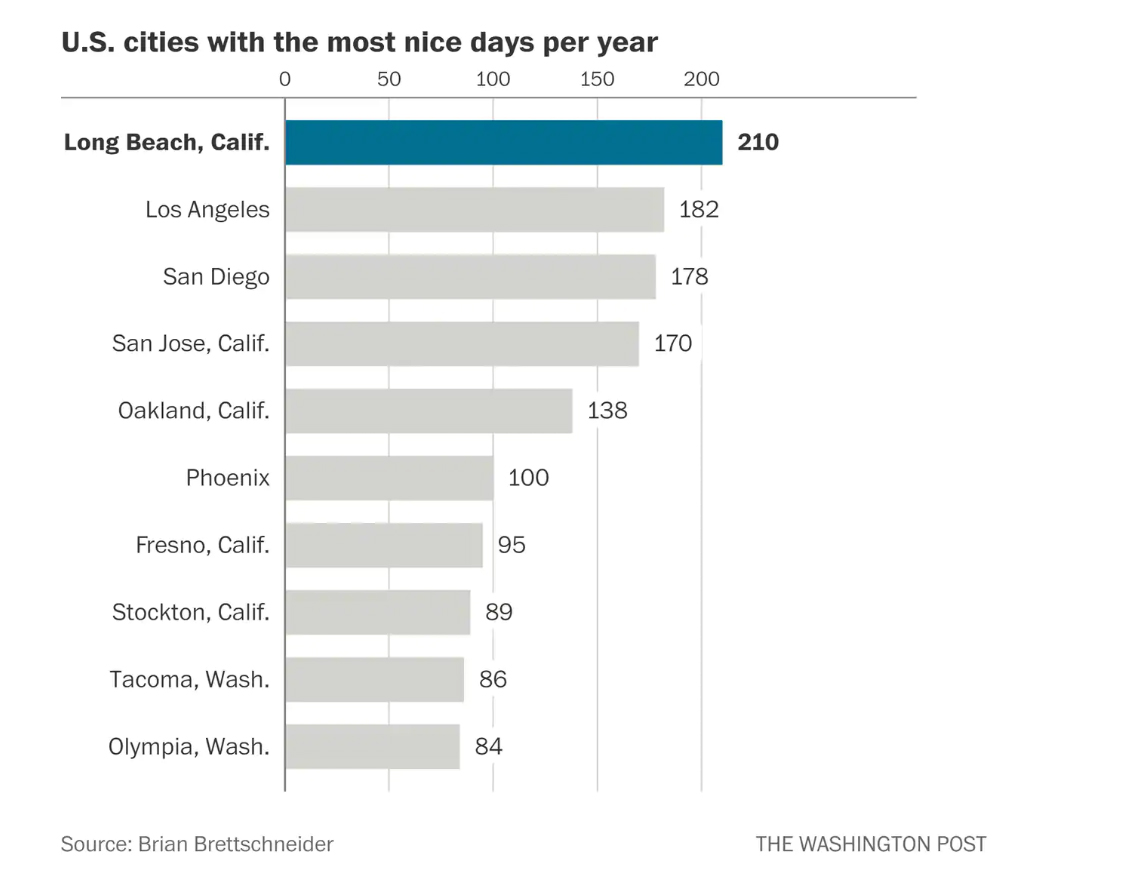 Other cities near the top are some you might expect, such as San Diego, famous for its great weather, and parts of California’s Central Valley. All of the top 10 are on the West Coast.

Other high-scoring cities, which also include several in the Southeast United States, include:

Seattle’s high nice day count may surprise, given its rainy reputation, but it piles them up during its dry summer season.

Meanwhile, our condolences go out to Anchorage – which has less than three weeks per year of nice weather on average, the lowest of any city in the nation. 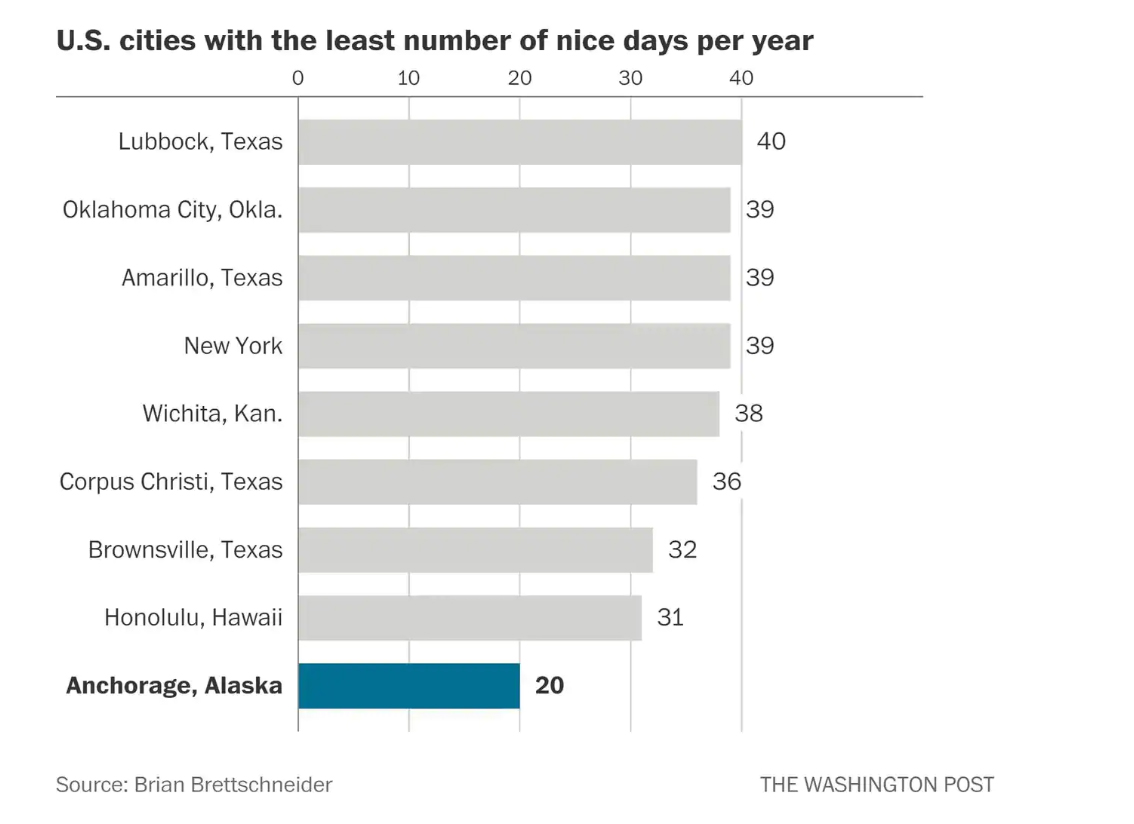 Other cities that score poorly, many in the Midwest and Northeast, include:

When we map the nice-day counts, the zone from Southern California north through the Central Valley clearly stands out as the region with the greatest frequency of ideal weather. 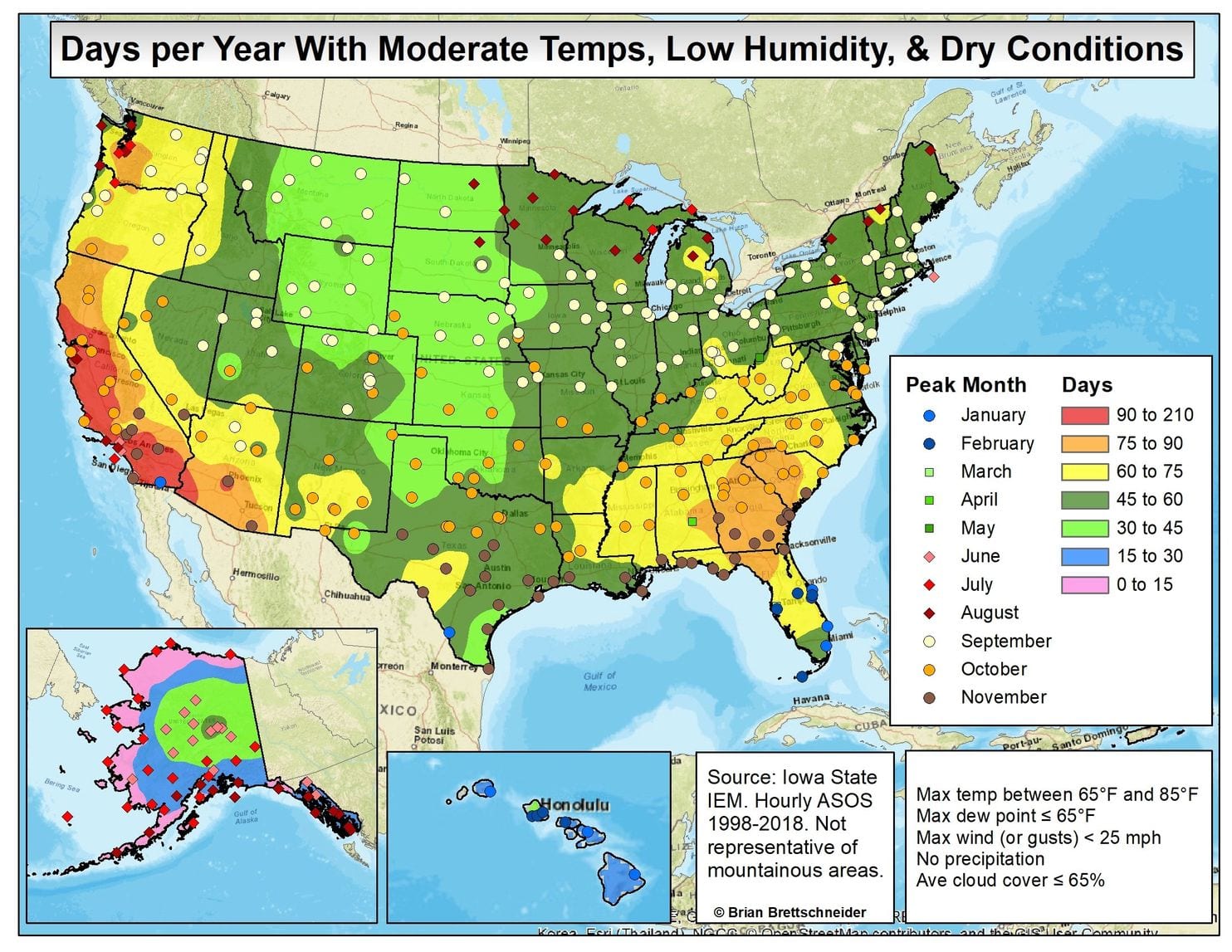 The persistent maritime influence of these locations provides many dry days with moderately warm temperatures year-round.

Farther east, areas in southern Arizona scored big in the ideal-weather department. The reasons are much different, though. During the cooler months, places such as Phoenix and Tucson have many days with ideal weather.

Remember that this is a 12-month analysis. In Phoenix, not a single day made the cut during this blistering hot June through August period, but more than half the days qualified from November through March.

The Southeast is the other part of the country that boasts a relatively high number of nice days. Many days in October and November (greater than 50 percent) meet the target criteria, and so do quite a few in the spring.

On our map of nice-day counts, we also indicate the months when nice days are most frequent. September (yellow dots) stands out as the month of the year with the most nice days across a large part of the nation, although October (orange dots) is a close runner-up.

No wonder it’s such a popular time of year to watch college football and attend fall festivals.

In the central portion of the United States, there is a notable drop-off in days per year meeting the criteria. This is a result of the wind speeds. The Great Plains are the windiest part of North America, and since we included a wind criterion, a number of days were excluded because of high winds.

There are relatively few nice days in South Texas, because it’s too humid from late spring to early fall and too cold during winter.

In Alaska, a dark green region on the map surrounds the Fairbanks area. Fairbanks, Nenana and Galena all meet the ideal weather criteria over 45 days per year. These values are similar to such places as Washington, DC, Dallas and Chicago.

Obviously the Alaska days occur in the core summer months.

Perhaps most surprising is the low number of nice days for Hawaii. Isn’t Hawaii a weather paradise?

Since we are looking at days with moderately warm temperatures and low humidity, Hawaii dropped way down the list based on the humidity (and wind) criteria. This nicely highlights that no index is perfect.

“Beauty is in the eye of the beholder” – Margaret Wolfe Hungerford.

Using automated weather stations with relatively complete data between 1998 and 2018, we systematically evaluated every daily and hourly observation for 373 stations around the country for all 365 days of the year and computed the number of days per year that met all of the following specific criteria:

Note that these criteria are the same that the Capital Weather Gang uses to determine whether Washington, DC, will be awarded a “nice day sun” in its daily forecasts.

The time period for this analysis was chosen because nearly every station since 1998 uses similar automated equipment – making for an apples-to-apples comparison.

Here are additional city annual nice-day counts – ranking close to the middle of the pack:

Brian Brettschneider is a climate scientist in Anchorage. His PhD is in environmental geography with a focus in climatology. He conducts climate research for the University of Alaska at Fairbanks.

Jason Samenow contributed to this report.

Scientists Discover ‘Silent’ Stingrays Actually Make Weird Clicking Noises
It Really Is in Your Head: Thinking Hard and Long Can Cause Brain Drain
Researchers in South America Discover a New Species of Tiny but Tough Dinosaurs
Minor Google Meltdown Exposes The World’s Utter Reliance on a Single Tech Company
Deep-Sea Sponges Can ‘Sneeze’ Out Mucus, and The Footage Is Weirdly Mesmerizing