Four years after a mummified torso decorated with unique tattoos was uncovered in a Luxor tomb, Egyptian authorities have officially confirmed the remains once belonged to a highly respected religious figure who died in her late twenties or early thirties.

The unusual remains represent an early example of complex religious tattoos in ancient Egypt, adding evidence to the hypothesis that such a detailed form of body modification might have turned women into objects of divine or magical ritual.

“Scientific and archaeological studies reveal that it is the mummy of a woman who probably lived between 1300 and 1070 BCE and died when her age ranged between 25 and 34 years,” the Supreme Council of Antiquities secretary general Mustafa el Waziri announced last week.

The announcement might be recent, but the torso was discovered at the archaeological site of Deir El-Madina Village on Luxor’s west bank by the French Institute of Oriental Archaeology back in 2014, inside a tomb that showed clear signs of ransacking.

Without hands, legs, a head or a pelvis, it wasn’t easy to tell much about the body’s age. The looted tomb also provided few clues concerning her history, leaving researchers keen to understand more about her background with a formidable task.

What they did have was a body adorned with more than 30 intricate designs inked into its preserved skin across its shoulders, neck, back, and arms.

Some were of lotus blossoms and seated baboons, indicating magical properties of healing or protection against illness. Most were clearly meant to be visible. 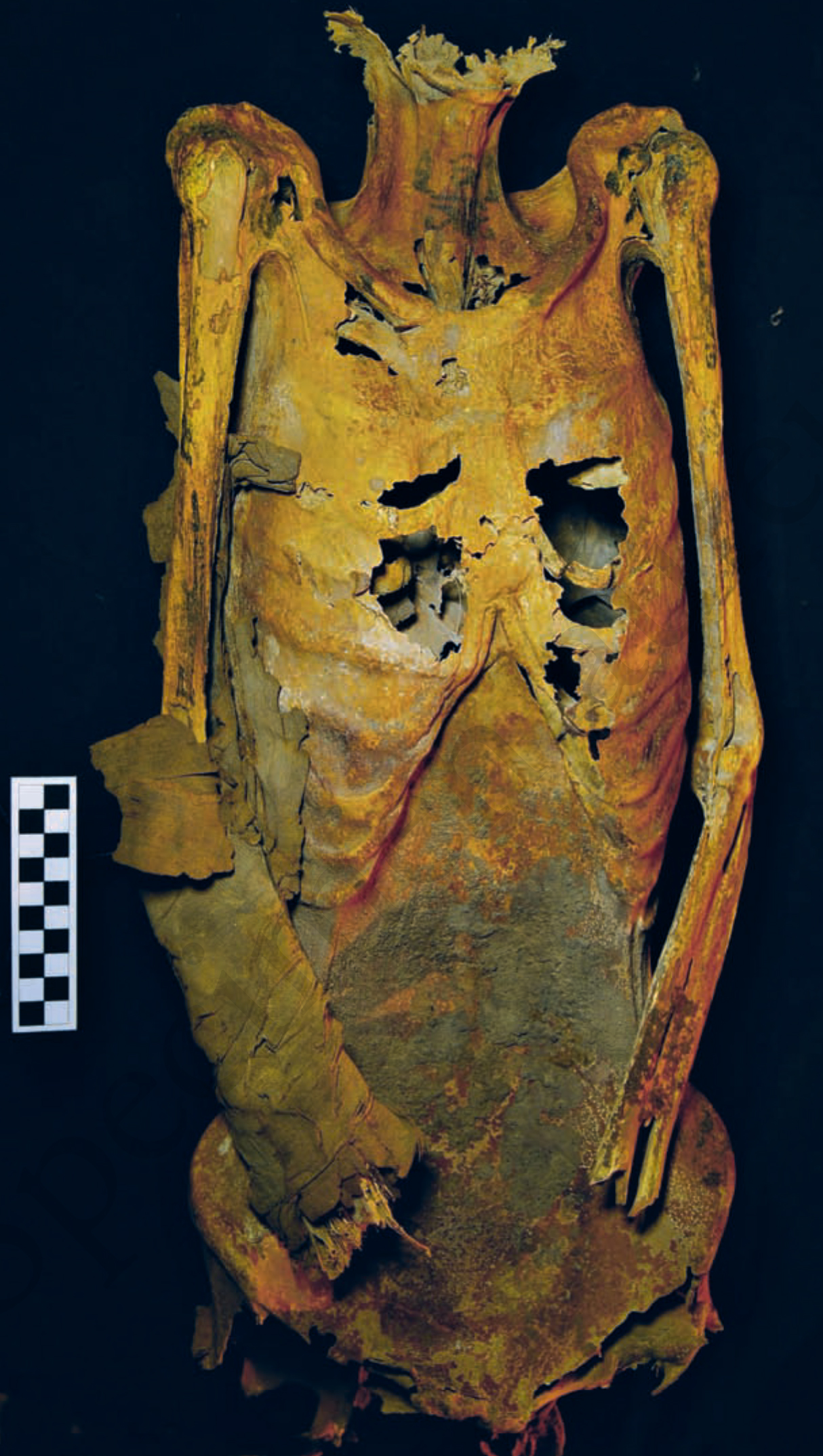 But it was the multitude of narrow eyes edged with snaking lines that really stood out.

“Any angle that you look at this woman, you see a pair of divine eyes looking back at you,” bioarchaeologist Anne Austin of Stanford University explained at a meeting of anthropologists in 2016.

The numerous ‘wadjet’ or Horus eyes that decorated her body wouldn’t have looked out of place on temple walls, such as where the goddess Hathor was worshipped.

Which prompted researchers to wonder – was this the body of some sort of priestess?

Figural tattoos in ancient Egypt date back at least 5,000 years. Prior to this, body art mostly consisted of dots and simple lines.

Ancient examples of more complex tattooing stand out because they’re so incredibly rare, making it hard to do much more than speculate their meaning.

Archaeologists can make informed guesses based on patterns they find on figurines, but it’s a leap to assume these images accurately represent tattoos as they were in reality.

In 1891, a French Egyptologist named Eugène Grébaut discovered something of a Rosetta Stone for tattoos in an old wooden coffin – the mummified remains of a woman from the 11th or 12th Dynasty (roughly 4,000 years ago).

Thanks to her own beautifully inked patterns that resembled those found on tiny religious statues and sculptures, she came to be known as Amunet, Priestess of the Goddess Hathor.

There’s just one problem; there’s been debate over whether women would have been permitted to act as religious figures in many of Egypt’s sects, what with the whole menstruation thing and all.

With this more recent find, the discussion has again revived around whether the woman with divine and magical images inked into her flesh might have been a religious figure, or if the tattoos had some other purpose, perhaps to heal her of sickness.

Researchers had their say on the matter two years ago, publishing a study that narrowed down her age at the time of death based on bone growth and density.

They also argued that this figure was indeed somebody of some religious significance. Those tattoos, they suggest, might have even turned her into an object of divine ritual.

They cite evidence that women could indeed be conduits of divine power, and refer to examples of ‘wise women’ from the same time period.

“This assumption leads us to assert that our tattooed woman was also perhaps one of these wise women or, at least, a kind of magician,” they suggest in their report.

It’s clearly taken some time for the concept to be mulled over by Egypt’s officials. The Supreme Council of Antiquities now recognises the remains do in fact represent a figure who had a role of some religious significance in Egypt’s history.

After some 3,000 years, it’s wonderful to see her decorated body can once again be appreciated as a work of art.

Scientists Reveal The Most Precise Map of All The Matter in The Universe
AI Predicts We’ll Breach Our Climate Goal in Just 10 Years
It’s Possible Neanderthals Evolved So They Wouldn’t Smell Their Own Stink, Study Finds
The First Stars May Have Been Heavier Than 100,000 Suns
An Incredible Thing Happens When Dolphins And Humans Team Up