He had been in his grave so long that when his family dug him up to burn his heart, the organ had decomposed and was not there.

Desperate to stop him from stalking them, they took his head and limbs and rearranged them on top of his ribs in the design of a skull and cross bones. He was a “vampire” after all, and in rural New England in the early 1800s, this was how you dealt with them.

When they were finished, they reburied him in his stone-lined grave and replaced the wooden coffin lid, on which someone had used brass tacks to form the inscription “JB 55,” for his initials and his age.

Now, 200 years or so after the death of what is now the country’s best studied “vampire,” DNA sleuths have tracked down his probable name: John Barber.

He was probably a hard-working farmer. Missing his top front teeth, he was no neck biter. He had a broken collar bone that hadn’t healed right, an arthritic knee that may have made him limp. And he had died an awful death, probably from tuberculosis, which was so bad it had scarred his ribs.

The latest findings in a case that started in 1990 when his coffin was discovered in a gravel quarry in Griswold, Connecticut, are contained in a new report by, among others, experts at the Armed Forces Medical Examiner System’s DNA laboratory in Dover, Delaware.

The report was summarized in a presentation on July 23 at the National Museum of Health and Medicine in Silver Spring, Maryland, which aided the study and where the remains are held. 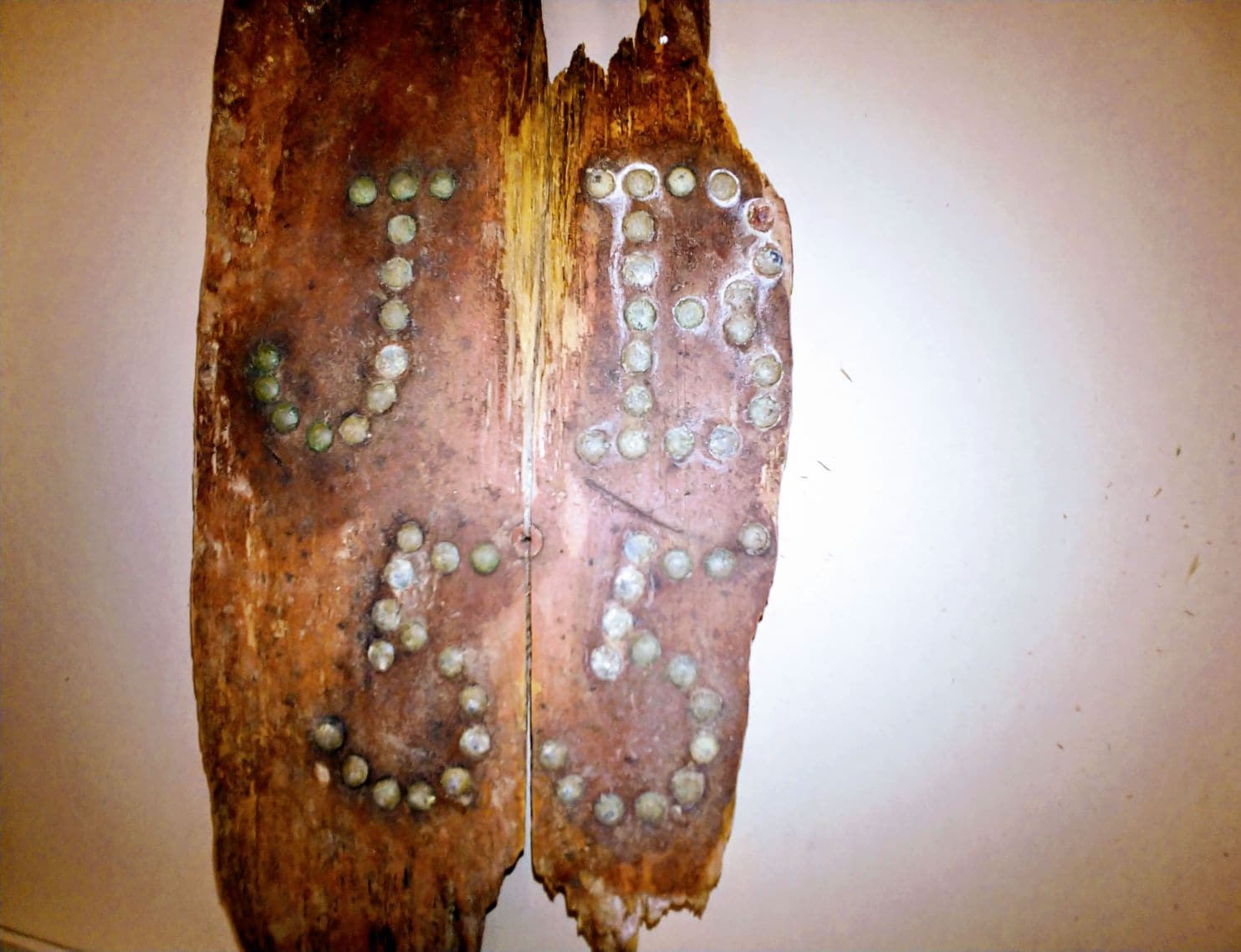 A fragment of the coffin. (Michael E. Ruane/The Washington Post)

The case is unusual because Barber may be the country’s only supposed “vampire” whose bones have been studied by scientists.

“This case has been a mystery since the 1990s,” Charla Marshall said in an email. Marshall is a forensic scientist with SNA International in Alexandria, Virginia, who worked on the project.

“Now that we have expanded technological capabilities, we wanted to revisit JB 55 to see whether we could solve the mystery of who he was.”

It is the latest chapter in a project that has cast light on the eerie vampire scare in New England – Connecticut and Rhode Island especially – in the late 1700s and early 1800s, and its connection to the spread of tuberculosis, or “consumption”, as it was called.

The highly contagious disease was so wasting and terrifying that those who died of it were believed to leave their graves, infecting relatives and draining away blood and life, scholars have said.

These attacks were more mysterious and less graphic than those of the blood sucking vampires of Gothic fiction.

“This was not . . . bats flying through the night,” said Nicholas F. Bellantoni, the retired Connecticut state archaeologist who worked on the case from the start and is one of the report’s authors. “This is not Bela Lugosi.”

But the terror they brought was real. Consumption often caused a bloody cough and left victims pale and gaunt with blood in the corners of their mouths, author and folklorist Michael E. Bell wrote.

“The emaciated figure strikes one with terror,” recounted an 18th-century doctor quoted by Bell in a 2013 essay in the journal Kritikos.

“The forehead covered with drops of sweat. The cheeks . . . a livid crimson. The eyes sunk. . . . The breath offensive, quick and laborious.”

The vampire’s true menace seemed to come after death, and he had to be killed again during what Bell called “therapeutic exhumation”. Often the suspected vampire was a family member who had died of the disease and was thought to be infecting sons, daughters or a wife.

Family members were frequently the ones conducting the exhumation. Bell has documented 80 such cases, mostly in remote areas of New England.

“This was being done out of fear and out of love,” Bellantoni said. “People were dying in their families, and they had no way of stopping it, and just maybe this was what could stop the deaths. . . . They didn’t want to do this, but they wanted to protect those that were still living.”

“People were desperate,” he said.

The best method of killing the suspected vampire was to check the exhumed corpse to see if any liquid blood remained in the heart. If so, the deceased was probably a vampire, according to the belief.

The heart was then removed and burned, with family members sometimes inhaling the smoke to prevent further disease.

Similar incidents have long turned up in Europe, where there are many accounts of corpses being dug up, burned, rearranged, decapitated or having stakes driven through them.

In Barber’s case, there was probably no heart to burn, Bellantoni and Paul S. Sledzik wrote in 1994. So “the bones of the chest were disrupted” and the skull and thigh bones were “placed in a ‘skull and cross bones’ position,” they wrote.

After Barber’s grave was discovered, his remains were sent to the museum for study, and a sample from a thigh bone was sent to the DNA lab for analysis. But the technology of 30 years ago yielded scant results, the paper’s authors wrote, and identification was impossible.

But when modern tools were used – Y-chromosomal DNA profiling and surname prediction via genealogy data available on the Internet – the experts said they came up with a match for the last name: Barber.

They then checked old cemetery and newspaper records to see whether any Barbers ever lived in Griswold.

They discovered a newspaper notice mentioning the death there in 1826 of a 12-year-old boy named Nathan Barber, whose father was a John Barber. Researchers had found a grave near JB’s containing a coffin with the notation NB 13 similarly tacked on the lid.

The project began in November 1990 when an abandoned cemetery was encountered during mining at a sand and gravel facility in Griswold, according to a study by Sledzik, Bellantoni and colleague David A. Poirier.

Human skeletons and crumbling coffin parts emerged from the Earth. And two human skulls tumbled down an embankment when three boys playing there dislodged them.

Investigators eventually removed the remains of 27 people – five men, eight women and 14 children – from 28 graves in what scholars discovered was an old burying ground called the Walton Family Cemetery. (One grave contained evidence of a coffin but no human remains.)

But it was grave No. 4 that drew the most attention.

“Every one was in good anatomical position . . . except this one individual, JB 55,” Bellantoni said.

Under his coffin lid, Ballantoni and his colleagues found the strange skull and cross bones arrangement.

“His thigh bones . . . were uprooted from the anatomical position and crossed over the chest,” he said.

“The chest had been broken into, and the . . . skull was decapitated and moved away,” he said. “I was totally befuddled. I had no clue what I was looking at.”

“So JB turned out to have tuberculosis . . . [evident] because of the lesions on his ribs,” he said. “We do believe that he was rearranged in the grave because he was believed to be undead.”

Bellantoni said JB had probably been deceased four or five years when he was exhumed, which, based on his recovered coffin hardware, probably happened in the early 1800s.

“Here in New England . . . we had large farming families,” he said.

“Because they didn’t understand the transmission of the disease, you had family members who were suffering from tuberculosis sitting at the dinner table with the whole family coughing, and you had tubercular victims sleeping in one room with five or six brothers and sisters coughing.”

“It was epidemic,” he said.

So what now of poor John Barber, the alleged vampire?