When the Boknis Eck Observatory – an environmental monitoring station on the floor of the Baltic Sea off the coast of Germany – stopped sending data on 21 August, scientists thought there was a problem with the data transmission.

But when they sent divers down to check, the whole 740-kilogram (1,630-pound) car-sized kit and kaboodle was just… gone. Completely vanished. All that remained was the cable.

“The devices were gone, the divers could not find them anymore,” said marine biogeochemist Hermann Bange of the GEOMAR Helmholtz Centre for Ocean Research in Kiel.

“When the divers reached the bottom of the sea last week at the observatory’s location, they found only the torn-off land cable. It was completely shredded.”

Because of the size and mass of the thing, it’s unlikely, German officials say, that it was removed by storms, currents, or marine animals.

The station, installed by the government-funded Kiel Ocean Research Centre and the Helmholtz Centre Geesthacht, consisted of two parts in a rack. There was the power supply, connected to land by the cable, and the observatory itself, containing sensors to monitor temperature, salinity, oxygen, currents and methane concentrations. 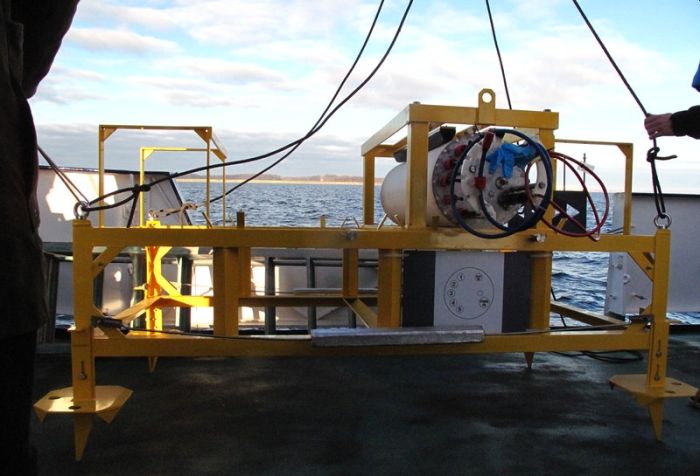 The power supply frame. (Research Dive Centre of the CAU)

The observatory was positioned about 1.8 km (1.2 miles) offshore, north of Kiel in northern Germany. The place was a carefully selected restricted zone, and off limits to boats – but it’s possible nonetheless that someone was able to enter the area without detection and retrieve the €300,000 (about USD$330,000) observatory from its seafloor depth of 22 metres (72 feet).

As for why, it’s possible that it was stolen for metal. Apparently seafloor salvage – especially from sunken pre-nuclear military vessels – is tremendously lucrative, and thieves have become adept at plundering entire ships without anyone noticing. Although the observatory was only installed in 2016, thieves may have seen an opportunity and pounced.

But it’s not just the metal that has gone missing. The GEOMAR scientists are mourning the loss of their precious data. It’s possible that another observatory could be built, but in the meantime, there is nothing monitoring that section of the sea for the first time since 1957.

This not only means there’s going to be a gap in the data, but if something important happens in the undersea environment, we now have no surefire means of detecting or observing it.

“The data that we collect is downright priceless,” Bange said. “They help research to register changes in the Baltic Sea and possibly take countermeasures.”

The police are investigating the theft, but the team also hopes that publicising the loss will produce some leads.

“We would be very happy about the hints,” Bange said. “Maybe someone saw something on the morning of 21 August at the Sperrgebiet ‘Hausgarten’ near the Hökholz campsite. Or someone finds parts of the frames somewhere on the beach.”

They are also planning to try and get the station operational again as fast as possible.