All around the world, people honour their dead in myriad ways.

In Vietnam, families burn cash, clothes, shoes, even luxury items, all made from paper to bid their loved ones well in the afterlife.

In India, mourners carry bodies wrapped in coloured cloths to the banks of the River Ganges where they are cremated on funeral pyres.

Now, archaeologists have discovered that at the same time when Egyptians were entombing mummified pharaohs with gold and riches, people in Bronze Age Britain had their own special burial practices – and a penchant for crafting keepsakes out of bone.

The most remarkable might just be a hollowed-out human thigh bone tube, suggested by some to have been a musical instrument of sorts, buried with a man found close to Stonehenge.

Other people have been found interred with the bones of people who had lived long before them.

Archaeologists Thomas Booth, from London’s Francis Crick Institute, and University of Bristol’s Joanna Brück wanted to work out who the remnant bones belonged to, and how long they had been kept before they were buried.

Looking through the literature, they collected information on the dates of human bone fragments that looked to have been deliberately placed in graves, possibly as a form of ceremony, as well as burnt and unburnt animal bones, charcoal fragments and nutshells that were found in the ground around them.

They also conducted new measurements on 38 unburned and 16 cremated remains, and other associated materials.

“After radiocarbon dating Bronze Age human remains alongside other materials buried with them,” explained Booth, “we found many of the partial remains had been buried a significant time after the person had died, suggesting a tradition of retaining and curating human remains.”

Archaeologists had suspected something of the sort after finding deposits of cremated bone in British burial grounds that were too small to account for the remains of one whole skeleton. They thought maybe mourners had divided the ashes amongst themselves and their buried relatives.

Other graves from the Bronze Age (which in Britain stretched from around 2450-600 BCE) contained human bones from skeletons that had deliberately been separated at the joints. Previous studies have also provided evidence that these ancient British cultures practiced their own forms of mummification.

This new study reveals that communities up and down the British Isle adorned burials with the bones of people who had lived around two generations before them – likely someone they knew in life, and not some distant mythical ancestor.

“Our results suggest that Bronze Age human remains were curated for relatively short periods, from decades to around a century,” and up to 200 years at most, Booth and Brück wrote in their paper.

“In most or all cases, curated human bones probably represent the remains of individuals whose identity was known and who existed within living or cultural memory.”

One woman was buried with two skulls and the limb bones of three other individuals that had died 60-170 years before her. The curated bones were presumed to have been retrieved from a ceremonial box of bones uncovered just a few metres away.

This suggests that the remains of the dead were viewed as powerful or significant by the Bronze Age Brits, that they were retained for funeral practices, and in some cases, even passed among communities.

“Although fragments of human bone were included as grave goods with the dead, they were also kept in the homes of the living, buried under house floors and even placed on display,” Brück said. 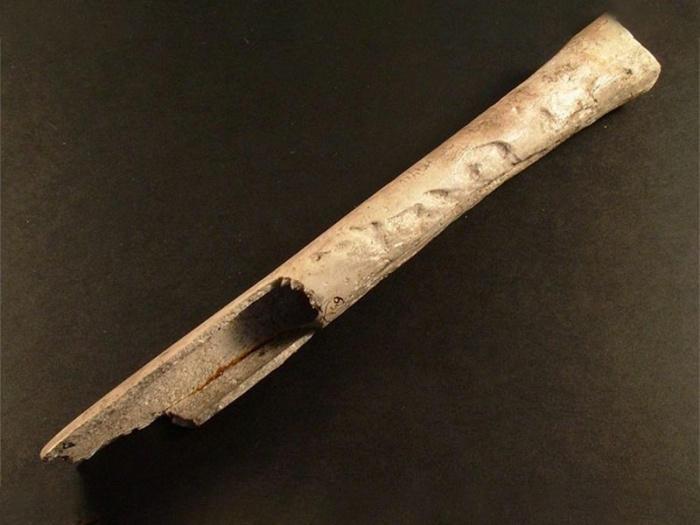 Tube carved from a human thigh bone and found buried with a man close to Stonehenge. (Wiltshire Museum)

Of course, there are a few other reasons the researchers had to consider as to why the curated human remains might appear older than the whole skeletons they were buried with.

If Bronze Age Brits were eating lots of protein sourced from marine or freshwater environments, ‘old’ carbon might have accumulated in their bones over the course of their life, but previous studies suggest they weren’t so fond of fish.

Or, the cremated bones that Booth and Brück dated could have taken on the radiocarbon signatures of the wood on which they were burnt.

But both alternatives were ruled out and the researchers concluded that ”generally, the results of our analysis of the radiocarbon data are best explained by human remains having been curated and deliberately deposited years later.”

The duo also X-rayed some curated bones (the unburnt ones) in 3D using a micro-CT scanner to see how much the remains had been degraded by bacterial attack.

If bacteria had eroded the bones, it would indicate that the remains had been buried, flesh and all, soon after death. But as the results showed, this was not always the case.

“Some bones were exhumed after burial, and some had been de-fleshed by being left to decompose on the ground,” in a process called excarnation, Booth explained.

So just like many societies around the world today, it seems Bronze Age Brits had a variety of different ritual practices around death; as the researchers declared in the title of their paper, death is not the end for some bones.

The research was published in the journal Antiquity.