Modern-day drone sensors can sometimes detect what’s invisible to the human eye, such as the remains of a historical city called Etzanoa or the ‘Great Settlement’ in the fields of Wichita, Kansas – remains that have been buried for hundreds of years.

Researchers think they’ve found what’s known as a ‘council circle’ monument in Etzanoa, and while no one is quite sure exactly what these circles were used for, they would have been significant sites for the community of the time.

The circular ditch measures some 50 metres (164 feet) in diameter and is a couple of metres (6.6 feet) deep. It matches other uncovered earthworks in the area of a similar shape, and has been picked out of a survey site of about 18 hectares (44.5 acres). 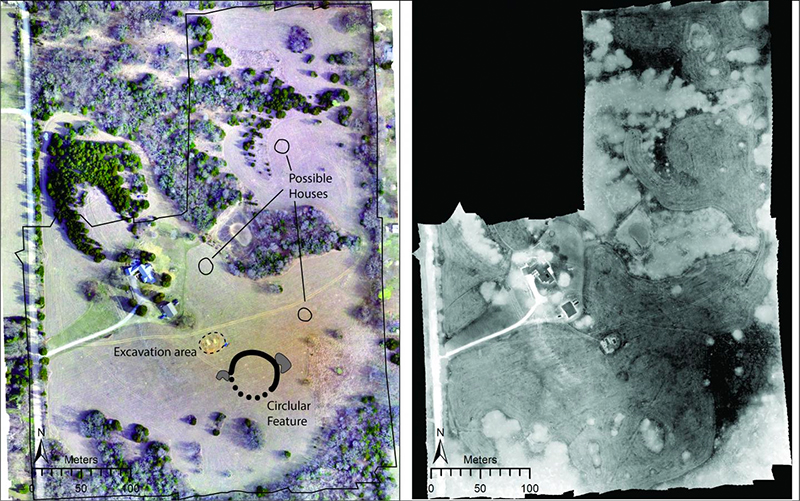 “Our findings demonstrate that undiscovered monumental earthworks may still exist in the Great Plains,” says anthropologist Jesse J. Casana, from Dartmouth College. “You just need a different archaeological approach to recognise them.”

“Our results are promising in suggesting that there may be many other impressive archaeological features that have not yet been documented, if we look hard enough.”

Key to the discovery was the thermal, near-infrared (NIR) and visible light imagery captured by the drones as they flew over the site. These measurements capture slight changes in the soil composition, temperature, and nearby vegetation caused by infilling.

Ground that has been disturbed and replaced will retain water and therefore emit heat differently to the earth around it, and that enables drones to capture evidence of long-lost underground structures, centuries after they’ve disappeared from view.

So we have evidence the circle was there, but how was it used? Experts aren’t sure if these constructions were built to host rituals, keep astronomical calendars, house elite members of society, or even as defences against attack.

“While we may never know what the council circles were used for or their significance, new archaeological methods allow us to see that people made these earthworks,” says Casana.

Etzanoa or the ‘Great Settlement’ is thought to have been home to up to 20,000 Native Americans at one point, with the city occupied between 1450 and 1700 CE. Its location wasn’t pinpointed until 2017 after the discovery of a cannonball placed the site of a battle in the area, close to Arkansas City.

It’s not clear exactly what happened to Etzanoa in the 18th century and beyond – European disease, warfare, and enslavement may all have played a part – but it was eventually abandoned and almost lost to time. Today, the prairie is used as a cattle ranch.

Although much of the area has now been developed and built over, it’s encouraging to see that discoveries like this are still possible – and there could be more down the line as the detecting technology improves.

“More broadly, our discovery also serves as a powerful reminder that many archaeological features are likely preserved in the modern landscape that can only be recognised by employing appropriate technologies at large spatial scales,” conclude the researchers in their published paper.

The research has been published in American Antiquity.

Reconstruction of The First Mammal’s Genome Suggests It Had 38 Chromosomes
Our Galaxy Could Be Evaporating as Dead Stars Flee The Milky Way
What Exactly Does It Mean to Die of ‘Old Age’?
A Planet-Sized Heatwave Has Been Found in Jupiter’s Atmosphere
Bitcoin’s Climate Impact Is Bigger Than Beef Farming – And It’s Only Getting Worse