As President Donald Trump and Kim Jong Un have conducted a meeting in Singapore, it’s worth remembering a key impetus for the summit: North Korea can likely strike anywhere in the US with its nuclear weapons.

In July and November, North Korea test-launched intercontinental ballistic missiles, or ICBMs, that can reportedly deliver nuclear warheads to targets thousands of miles away.

US intelligence officials also believe North Korea can miniaturize its warheads to fit atop those ICBMs, according to news reports – and not just any nuclear weapons.

While the exact capabilities of North Korea’s latest hardware remain in question, few experts deny North Korea is now a credible nuclear-armed power, and a thermonuclear one.

“Based on current information … North Korea could easily reach the US West Coast, and a number of major US cities,” David Wright, a physicist and the co-director of the Union of Concerned Scientists’ global security program, wrote in a blog post last year.

To estimate how long it’d take for North Korean missiles to reach key US targets, Business Insider called up Wright for help in August. He said on Monday that his estimates below are still current.

The data show approximate flight times from the North Pyongan province (where the ICBMs were test-launched) to several key US targets. 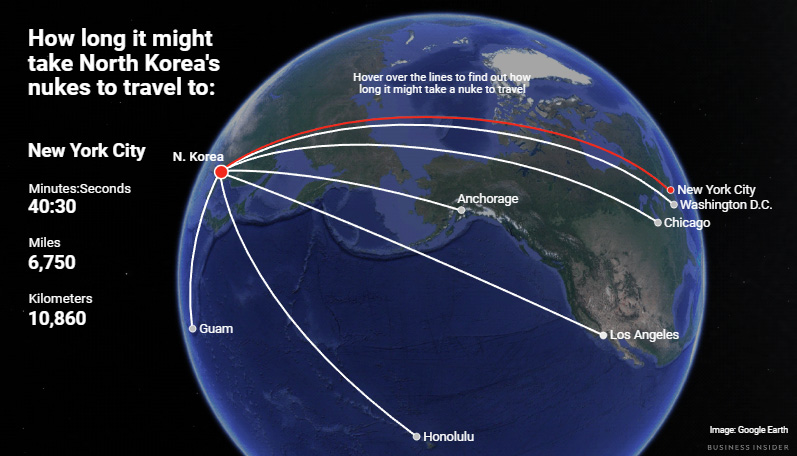 How the North Korean ICBM flight times were calculated

Wright, who is an arms control, missile technology, and space weapons expert, said the flight times and distances are not ironclad and come with numerous caveats.

For one, they’re calculated based on what is publicly known about North Korea’s Hwasong-14 and Hwasong-15 missile systems.

The latter missiles are thought to have a maximum range of about 8,100 miles (13,000 km), based on a test launch in November that shot a dummy warhead into space. This puts the missile within reach of more or less all of the US.

“The range of a ballistic missile is tied to its speed. It’s just like throwing a ball; the faster you throw it at a given angle, the farther it will travel,” Wright said, adding that the burn-out velocity – or speed a rocket reaches when it shuts off its engines in space – isn’t known for North Korean missiles, among other variables.

Yet given the angle of launch and some modifications, he thinks North Korean ICBMs might be capable of reaching between 3 and 4.2 miles per second at burn-out.

“I’ve tried to put in numbers that I think are related to North Korean missiles,” Wright said in August. “I get those from years of playing around with this stuff.”

Another unknown is payload weight.

The Hwasong-14 missile test, for example, reportedly flew some 2,300 miles into the sky, for a total flight time of about 47 minutes. It also lofted a reentry vehicle – a device that protects one or more warheads from burning up when ploughing through Earth’s atmosphere.

However, it’s uncertain if the dummy vehicle accounted for the weight of an actual warhead. (The lighter a payload, the faster, higher, and farther a missile can go.) There’s also evidence that the reentry vehicle failed and broke into pieces on its way back down.

“When you launch, the Earth doesn’t stay still. It rotates underneath the missile,” Wright said. “Trying to do this on a rotating Earth gets really complicated.”

This not only requires over- or under-shooting a missile, but also makes the physics of targeting far more complex.

“The range of a ballistic missile is tied to its speed, and if you’re firing east, you get a little bit of a speed boost from the Earth’s rotation,” Wright said.

He added that it depends on whether you’re firing at a target to your north or south, since Earth moves faster at its equator than northern or southern latitudes.

Finally, the numbers also assume a North Korean ICBM could thwart missile defence systems, such as the US military’s latest “kill vehicle” technology, and actually reach its intended target.

“If you’re launching your missile, you need to figure out how fast it’s going, shut off engines at the right speed, and keep it pointed in the right direction,” Wright said. “That’s hard to do really accurately.”

This story has been updated with new information. It was originally published on 14 August 2017.