Archaeologists working in Ukraine have found something they’ve never seen before: the bones of a young woman, buried 4,500 years ago, carefully decorated with black markings before being interred in a burial mound.

The bones, of a woman aged 25-30 and excavated by a Polish-Ukrainian team, were actually discovered a few years ago, in a barrow in central Dniester, now Ukraine.

“While drawing and photographing the burial, our attention was drawn to regular patterns, such as parallel lines visible on both elbow bones,” archaeologist Danuta Żurkiewicz from the Institute of Archaeology, Adam Mickiewicz University in Poznań told Science in Poland.

“At first, we approached the discovery with caution – maybe the traces were left by animals.”

Now, they’ve chemically analysed the bones and markings, and in an upcoming paper described how they were made: deliberately, by another human, using a black substance, similar to wood tar.

Even more interestingly, it had to have occurred not only after her death, but after decomposition, too – her grave possibly reopened, the markings applied, then the bones carefully laid out again in anatomical order before the body was buried again. 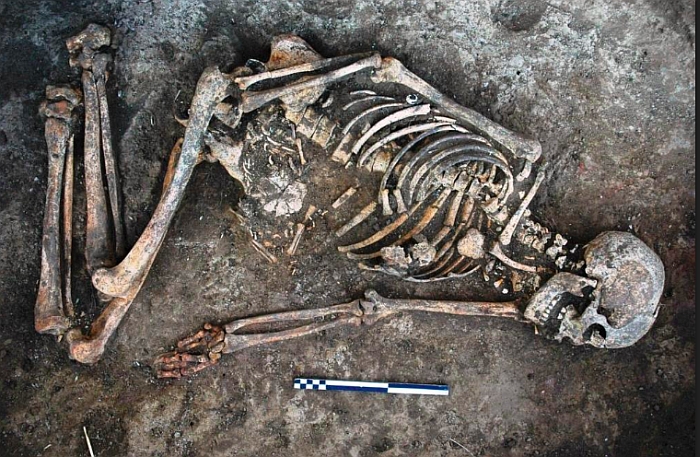 “It is surprising that the procedure of decorating the bones had to be done after death and the process of body decomposition. This is clearly indicated by the location of the decoration on the bone surface and the way dye was applied,” Żurkiewicz said.

No other bones have been found from this time period that have been treated this way, that we know of, across all of Europe. There have been similar discoveries – but those have been interpreted as the remnants of tattoos, so this find is thought to be unique.

So why this woman? Who was she?

It’s hard to tell, but she must have been very important, the researchers said. Her people were shepherding nomads, with no permanent settlements, using carts to travel longer distances. This peripatetic lifestyle left behind, therefore, no buildings.

What the nomads did leave behind were thousands of burial mounds, known as kurgans, across the steppes – indicating that funerary practices were deeply important to their culture, as indeed they have been to many cultures across recorded history.

But only relatively few of these burial mounds have been found to contain the remains of women.

Therefore, whoever she was, “The deceased, whose bones were covered with patterns, had to be an important member of the community,” Żurkiewicz said.

The team’s research will be published in the upcoming issue of Baltic-Pontic Studies, available in August.

It’s Possible Neanderthals Evolved So They Wouldn’t Smell Their Own Stink, Study Finds
A Billion-Dollar Biotech Company Plans to Bring The Dodo Back to Life
This Small Australian Marsupial Is Quite Literally Dying For Sex
A Hidden Food Web Exists in The Desert, And It Thrives on Death
Bar Graphs Induce a Hidden Bias in Interpretation, Experiment Shows