How does the brain make sense of all the information we’re bombarded with every second of every day?

It’s a complicated question, but researchers have invented two new illusions that give us some clues – one optical and one auditory. And they both trick the brain into travelling back in time to fill in gaps it thinks it’s missed.

This is technically known as postdiction, where a stimulus can have an affect on what we think we saw or heard in the past – as opposed to prediction, which works in the other direction, forwards through time.

The two illusions, the Illusory Rabbit and the Invisible Rabbit, are among the first to show postdiction working across multiple senses – sound and vision. They help to demonstrate how something we think happened might not have happened at all.

“How does the brain determine reality with information from multiple senses that is at times noisy and conflicting? The brain uses assumptions about the environment to solve this problem,” says one of the researchers, Noelle Stiles from the California Institute of Technology (Caltech). “”

“When these assumptions happen to be wrong, illusions can occur as the brain tries to make the best sense of a confusing situation. We can use these illusions to unveil the underlying inferences that the brain makes.”

You can check out the Illusory Rabbit for yourself below. How many flashes do you see?

Here’s how the illusions work: think of a beep sounding and an on-screen flash appearing almost simultaneously.

Now imagine three of those combinations, just 58 milliseconds apart, happening as the flashes move from left to right across a display (the beep sound stays central).

In the Illusory Rabbit, the middle flash never happens, but most people still think they saw three flashes to match three beeps.

In the Invisible Rabbit, it’s the middle beep that is missed – and the brain usually thinks there was no middle flash either.

The fact that the middle beep or flash IS getting manipulated shows postdiction at work – it’s actually the last flash and beep that causes the illusion to happen. They make our brain alter what it perceived in the past. 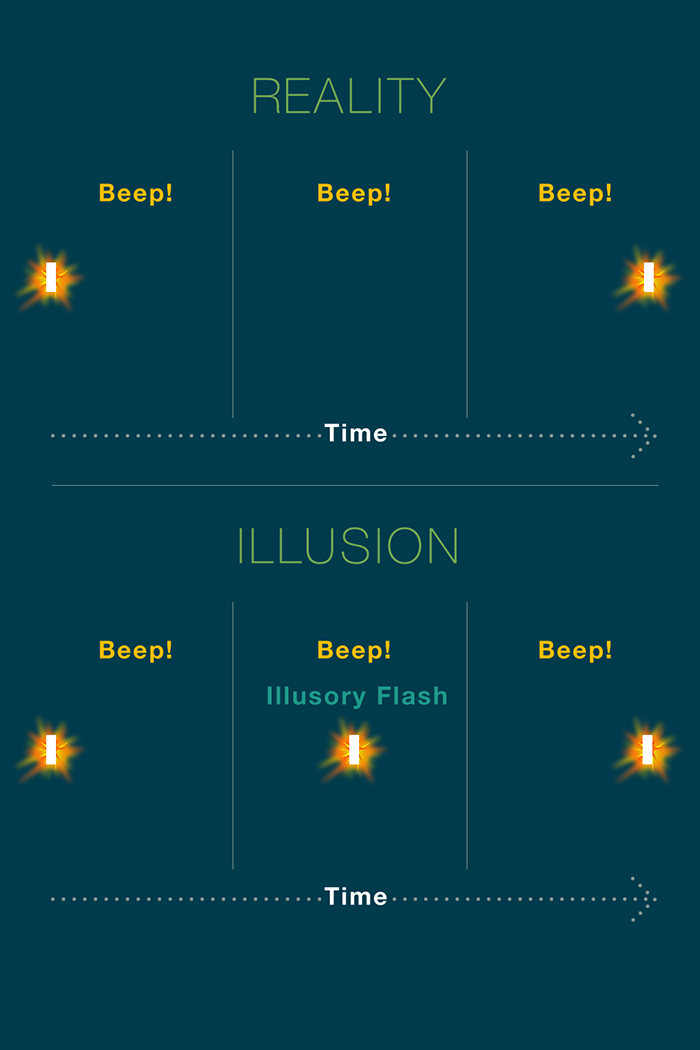 “The significance of this study is twofold,” says senior researcher Shinsuke Shimojo from Caltech. “First, it generalises postdiction as a key process in perceptual processing for both a single sense and multiple senses.”

“The second significance is that these illusions are among the very rare cases where sound affects vision, not vice versa, indicating dynamic aspects of neural processing that occur across space and time.”

All of this should prove helpful as scientists try and figure out how the brain makes sense of the world and presents the information to us. We’ve still got a long way to go in understanding the inner workings of the brain and how the mind’s perception works.

Of course we make some pretty big decisions based on what we think is happening – so it’s important to get it right. Many mental illnesses involve problems with perception too, so the more we know, the better we are able to find fixes.

“Illusions are a really interesting window into the brain,” says Stiles. “By investigating illusions, we can study the brain’s decision-making process.”

The research has been published in PLOS One.