A new study comparing human skulls with those of other animals claims that the dimensions of our heads appear to follow the golden ratio – that special number with a controversial reputation for being the “formula for beauty”.

Usually symbolised by the irrational number phi, or roughly 1.618, the golden ratio is amongst the most famous mathematical concepts. But is this fame deserved, or is the golden ratio – also known as the golden mean – just a case of numerology in a lab coat?

In this new study, Johns Hopkins neurologists Rafael Tamargo and Jonathan Pindrik argue there’s something interesting going on as far as our brain box is concerned, and phi might be a sign of sophistication.

“Evolving over millennia, the human skull embodies an elegant harmonisation of structure and function,” they write in their paper, which compares 100 physiologically normal human craniums with 70 representing six other mammals.

Of particular interest was a line called the nasioiniac arc, which connects a point on the nasal bones with a small bump at the back of the head called an inion.

The point where those weird zig-zags you see on skulls come together is a feature called the bregma. The distances from the nasal bone to the bregma, and then the bregma to the inion, were also measured. 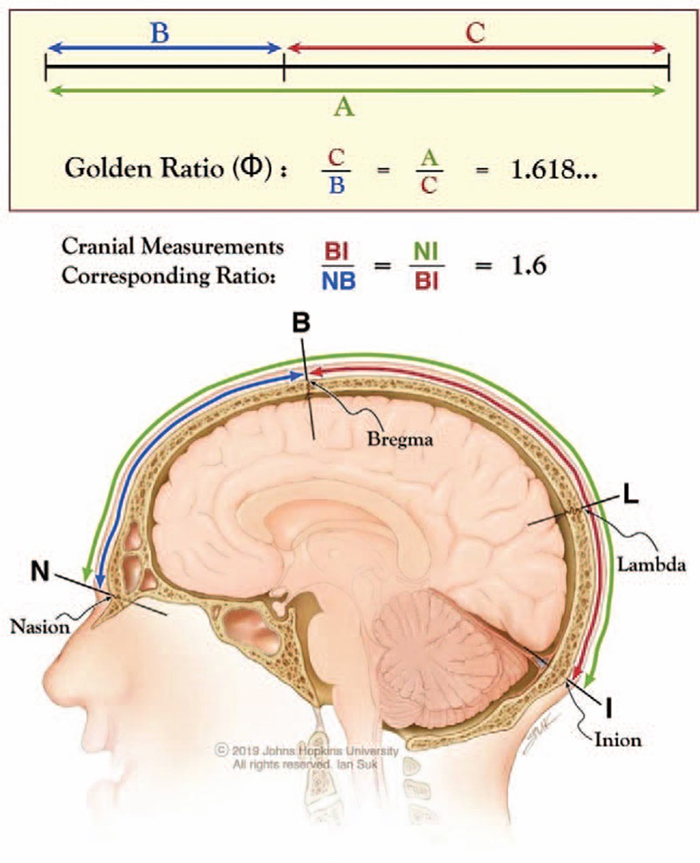 These midline cranial features weren’t exactly random selections; they were all chosen as representative distances corresponding with important underlying neural structures and junctions in both humans and other animals.

To Tamargo and Pindrik, 1.6 is intriguingly close to the golden ratio or 1.618… (the dots here represent that the number is infinite, although it’s typically rounded off at 1.618). Close enough to suspect there’s something interesting going on, the pair thinks.

“The other mammals we surveyed actually have unique ratios that approach the golden ratio with increased species sophistication,” says Tamargo.

“We believe that this finding may have important anthropological and evolutionary implications.”

Just what those implications could be isn’t exactly clear. In recent years, the ratio has been spotted among all kinds of physiological structures, from our heart down to our blood cells, prompting the question of whether this relationship is somehow biologically special.

Phi is certainly a rather elegant figure. Take two measurements, a bigger number (a) and a smaller number (b). They form a ratio – a : b.

If the ratio of (a + b) : a is the same as a : b, congrats, you can now bask in the radiant glow of the relationship between your two quantities, a and b.

In 1509, the mathematician Luca Pacioli thought this relationship was so golden, it actually made things look beautiful when applied geometrically. It certainly convinced Leonardo Da Vinci, who used it to determine key proportions in his art.

Outside of pure aesthetics, there are also claims the golden ratio represents deeper truths about the workings of the natural world.

The spiralling shell of the nautilus has been said to follow a pattern that embodies the ratio in the form of a ‘Golden spiral’, for instance. Even beautiful faces have been quantified by applying this mystical number to various proportions.

The question remains, however; is there some selection bias at work when we go fishing for ratios of roughly 1.6 in the Universe, or does the discovery of a golden ratio-like number in our bones – not to mention our cells and organs – indicate evolution loves phi?

Given the sheer variation within the human form, there’s plenty of room for skepticism.

In 2015, mathematics professor Eve Torrence from Randolph-Macon College in the US told The Independent that ”the idea that there’s this one rectangle [based on the golden ratio] that’s this perfect one… and is reflected in the human body, that’s one of the most silly things. Human beings are so different.”

It will be up to the scientific community to debate whether the golden ratio found in the midline of the human skull really is a sign of neural complexity.

But given the sheer variation between bones, lobes, vessels and vesicles, it would be odd if we didn’t find some ratios that seemed to shine like gold.

This research was published in The Journal of Craniofacial Surgery.