A team of archaeologists has discovered what’s thought to be the oldest intact shipwreck ever found, some 2,000 metres (1.2 miles) under the waters of the Black Sea. The amazingly preserved wreck is estimated to be around 2,400 years old.

Some 23 metres (75 feet) long, the sunken ship looks to be ancient Greek in origin, and was probably a merchant ship, although we don’t have knowledge of its contents just yet.

The ship is lying on its side, with the mast, the ship’s rudder, and the rowing benches used by the crew all still in place, according to the researchers. Even the bones of fish eaten by the sailors on board have been spotted. 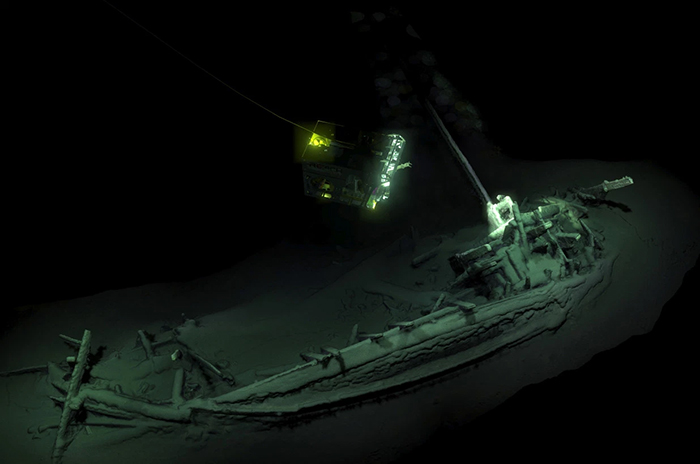 A small piece of the shipwreck was taken by remotely operated diving robots for carbon dating, giving the team its age estimate.

“A ship, surviving intact, from the Classical world, lying in over two kilometres of water, is something I would never have believed possible,” the project’s main investigator, Jon Adams from the University of Southampton in the UK, said in a statement.

“This will change our understanding of shipbuilding and seafaring in the ancient world.”

There are two reasons the ship has been found in such good shape: firstly, it sunk into anoxic waters – with depleted levels of the oxygen that would otherwise have caused the wreck to deteriorate over the years.

Secondly, it’s really deep down, beyond the reach of divers and scavengers.

“It’s preserved, it’s safe,” one of the team, Helen Farr from the Southampton Marine and Maritime Institute, told the BBC. “It’s not deteriorating and it’s unlikely to attract hunters.”

If you think the design looks familiar, you might have seen a similar vessel depicted on ancient Greek pottery – pottery like the Siren Vase in the British Museum, which shows a scene from Homer’s Odyssey.

It’s certainly right up there with the most fascinating shipwreck discoveries of recent times, including finds in the Caribbean Sea and off the coast of Australia.

The find is part of a larger scale operation called the Black Sea Maritime Archaeology Project (MAP), which has so far identified more than 60 sunken vessels in the Black Sea over the course of three years.

As well as making discoveries like this, the research is also looking at ancient changes in the sea levels of the region. Part of the work has included analysing the underwater remains of an early Bronze Age settlement near Ropotamo in Bulgaria.

Advanced underwater camera systems, similar to those used for offshore oil and gas exploration projects, are deployed to scan the sea bed and any wrecks on it.

None are as old, as well preserved, or as intriguing as this latest find though. Now the team is looking for extra funding to be able to go back to the site of the shipwreck and take a careful look at what’s hidden in the hold.

“Normally we find amphorae [wine vases] and can guess where it’s come from, but with this it’s still in the hold,” Farr told the BBC.

“As archaeologists we’re interested in what it can tell us about technology, trade and movements in the area.”

The researchers have made a documentary about their work, and are presenting their findings so far at a conference at the Wellcome Collection in the UK.

Astronomers Find What May Be a Habitable World 31 Light-Years Away
Bigfoot Has a Very Simple Explanation, Scientist Says
‘Polluted Realism’: How Monet’s Art Mirrors The Evolution of Smog
The Mysterious Asymmetry of Jupiter’s Asteroids May Finally Be Explained
A Hidden Food Web Exists in The Desert, And It Thrives on Death