Earth, with its reassuringly familiar continents, arranged in the dependable configuration you know and love, didn’t always look the way it does now.

Its land masses, once locked together in supercontinents, have cracked and broken and slid away from each other, and repeatedly come together again over the course of our planet’s 4.5-billion-year history.

In a sense, the location of your hometown has therefore done more globetrotting than you have. And, thanks to a cool interactive website that’s been doing the rounds recently, you can even explore how much that location has shifted over the course of hundreds of millions of years.

It’s called Ancient Earth Globe, launched a few years ago by palaeontologist Ian Webster. It combines palaeogeographic maps developed as part of the PALEOMAPS project – led by geologist and palaeogeographer Christopher Scotese – and data from GPlates, an open-source repository of geoscience data.

“I’m amazed that geologists collected enough data to actually plot my home 750 million years ago, so I thought you all would enjoy it too,” Webster wrote on Hacker News in 2018.

“Even though plate tectonic models return precise results, you should consider the plots approximate (obviously we will never be able to prove correctness). In my tests I found that model results can vary significantly. I chose this particular model because it is widely cited and covers the greatest length of time.”

With the combined tool, you can basically rewind Earth, going back as far as 750 million years ago. That’s not the entirety of the planet’s history, but it does encompass four supercontinents – Pannotia, Gondwana, Laurentia, and Pangaea.

When you open the map, it defaults to 240 million years ago – the Middle Triassic period, when Pangaea dominated the globe, the last supercontinent before the world as we know it emerged. Life was recovering from the devastating Permian-Triassic extinction event some 10 to 12 million years earlier, and dinosaurs and mammals were once again thriving. 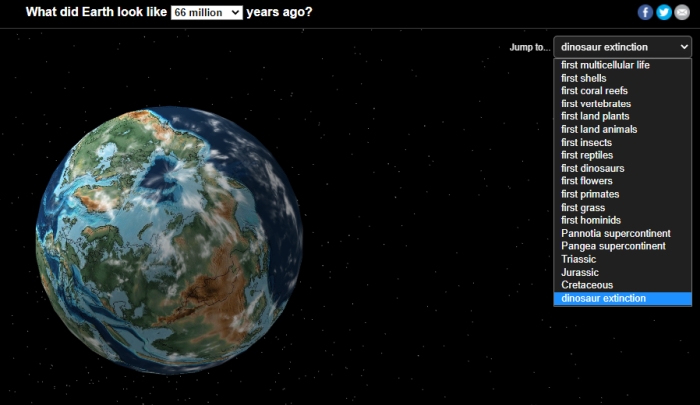 You can explore what the world looked like at the time of different events from a drop-down menu on the right, although according to Webster’s GitHub repository for the site, last updated five years ago, some of the information may be out of date by now.

But you can also choose your own dates from the drop-down menu in the centre; moreover, in the upper left corner – this is the part you’ve been waiting for – a text box allows you to input a location that you can then track across the ages, with lines marked to show the borders on present-day Earth.

“My software ‘geocodes’ the user’s location and then uses (Scotese’s) models to run their location backwards in time,” Webster told CNN. “I built the interactive globe visualisation and the geocoding and GPlates integration myself so that people could plug in their own locations.”

It is actually fun to zoom back time and see your hometown deep beneath the waves, or the gradual appearance of mountain ridges you recognise as you step forward. And it’s a nice reminder that nothing – not even this beautiful planet of ours – stays the same.

The Pacific Is Destined to Vanish as Earth’s Continents Meld Into a New Supercontinent
We Just Got Our Closest View of Europa in 20 Years, And We Can’t Stop Staring
A Planet-Sized Heatwave Has Been Found in Jupiter’s Atmosphere
We May Finally Know Why Oceans in The Southern Hemisphere Are Getting So Warm
Dinosaur-Killing Asteroid Produced Global Tsunamis Up to 2.8 Miles High