Deep in the cold, dark water, on the seafloor west of Greenland, a quiet ecosystem thrives. For the first time, a garden of soft corals and sponges has been found in these waters, sprawling across an area a little bigger than the City of San Jose.

The discovery highlights not only how little we understand the deeper regions of the ocean, but how much damage we could be doing while unaware. The newly discovered habitat sits right next to a deep-sea trawling area; scientists are calling for it to be classified as a vulnerable marine ecosystem.

Exploring the deep sea is challenging. The deeper you go, the less sunlight penetrates the waters, while the oceanic pressure steadily increases. By the time you’re a few hundred metres down, it’s cold, it’s dark, and the pressure is crushing, at least for humans.

This means that deep-sea exploration requires special high-tech equipment designed to withstand pressure. But the new research shows such exploration can be conducted without a great deal of expense.

The team’s rig – which they call a benthic video sled – consists of a GoPro, lights, and laser pointers (set a certain distance apart to act as a scale guide) in pressure cases, housed in a steel frame suspended from their research vessel. This low-cost sled can reach depths of 1,500 metres (4,920 feet). “The deep sea is often overlooked in terms of exploration. In fact we have better maps of the surface of Mars than we do of the deep sea,” said geographer Stephen Long of University College London and the Zoological Society of London in the UK.

“The development of a low-cost tool that can withstand deep-sea environments opens up new possibilities for our understanding and management of marine ecosystems.”

It was while using this video sled that the team discovered a vast coral garden spanning 486 square kilometres (188 square miles) in the Mesopelagic zone, at depths between 314 and 585 metres (1,030 and 1,920 feet).

At those depths, very little light penetrates – at the top of the zone, around 200 metres (656 feet) down, only 1 percent of the light visible at the ocean surface remains, and it only gets darker from there. And at 500 metres deep, the pressure is over 50 times the atmospheric pressure at sea level.

Down here, the photosynthetic symbiotic algae that give shallow-water corals their brilliant colours can’t survive. But the corals themselves – pale without algae – can still thrive on nutrients in the water.

And this is what the team found: a vast coral garden populated by cauliflower corals, feather stars, sponges, anemones, brittle stars, hydrozoans, bryozoans and, of course, fish. 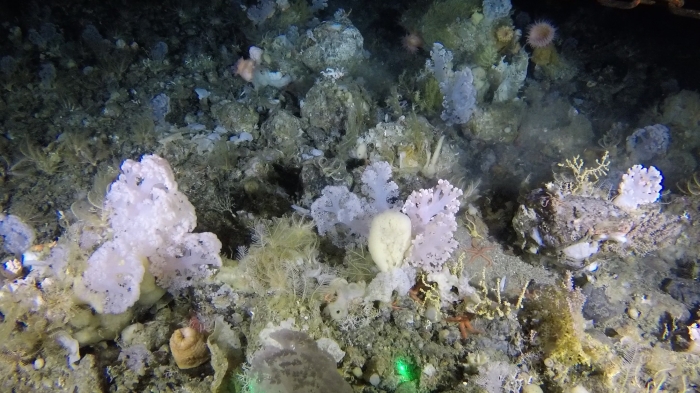 “Coral gardens are characterised by collections of one or more species (typically of non-reef forming coral), that sit on a wide range of hard and soft bottom habitats, from rock to sand, and support a diversity of fauna,” explained zoologist Chris Yesson of the Zoological Society of London.

“There is considerable diversity among coral garden communities, which have previously been observed in areas such as northwest and southeast Iceland.”

Indeed, there was no shortage of diversity. In 1,239 still images extracted from the GoPro footage, the team annotated 44,035 individual organisms. Of those, anemones were the most abundant at 15,531 identifications, but cauliflower corals weren’t far behind, at 11,633 identifications.

That such a vast ecosystem can remain hidden is a reminder for us to consider the environmental impacts of human activity in poorly understood regions of the sea, the researchers said.

“Greenland’s seafloor is virtually unexplored, although we know it is inhabited by more than 2,000 different species together contributing to complex and diverse habitats, and to the functioning of the marine ecosystem,” said environmental scientist Martin Blicher of the Greenland Institute of Natural Resources.

“Despite knowing so little about these seafloor habitats, the Greenlandic economy depends on a small number of fisheries which trawl the seabed. We hope that studies like this will increase our understanding of ecological relationships, and contribute to sustainable fisheries management.”

The research has been published in Frontiers in Marine Science.

This Small Australian Marsupial Is Quite Literally Dying For Sex
Lightning Strikes Create a Strange Form of Crystal Rarely Seen in Nature
A Billion-Dollar Biotech Company Plans to Bring The Dodo Back to Life
‘Polluted Realism’: How Monet’s Art Mirrors The Evolution of Smog
Incredible ‘Fairy’ Robot Sails on The Breeze Like a Floating Dandelion