Dating is hard enough when you have ample choice, but imagine drifting through a dark nothingness, half-formed and hopeless, starved for nutrients and love.

So goes the life of a bachelor anglerfish, and when there aren’t plenty of fish in the deep sea, you can’t blame them for being a little clingy when they do find one.

Still, some anglerfish take that neediness to the extreme. When certain species sniff out a giant female in the dark, they will whip out their sharp teeth and bite their date by the belly.

Once they have a firm grasp, these tiny males, sometimes no bigger than a centimetre, will release an enzyme that dissolves the surrounding skin, melding his and her tissues, and establishing a common circulation of blood.

Comfortable at last in a relationship that serves him up regular meals, the male may even start to lose its eyes, fins and some internal organs. 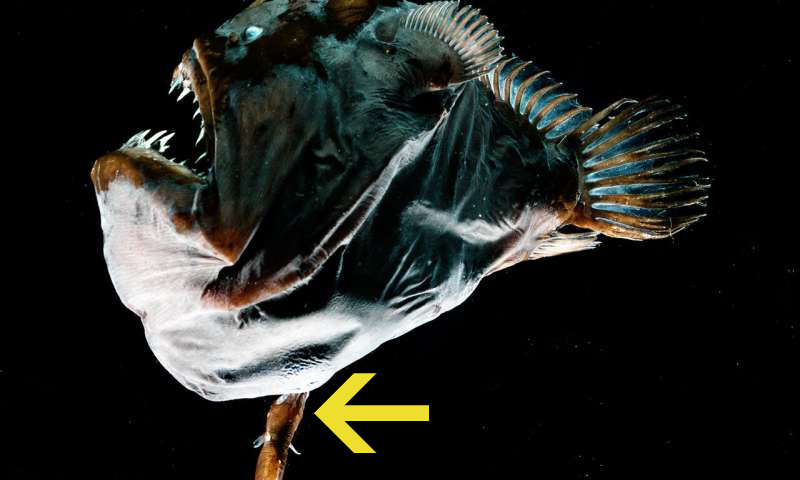 In this gruesome way, these fish become nothing more than loyal and loving appendages with testes. Or, more accurately, sexual parasites.

As one naturalist put it in 1938: “This is sheer fiction, beyond all belief unless we have seen the proof of it.”

And we have – we’ve actually got footage. Outside of identical conjoined twins, scientists say this is the only other example of sexual parasitism that’s naturally occurring.

For 100 years, we’ve wondered how anglerfish actually do it, and now we might have figured it out.

Even for the best doctors, fusing foreign tissue and establishing a common blood circulation is incredibly difficult. Human organ transplantation requires lifelong immunosuppressants, because vertebrate immune systems are evolved to attack foreign matter that may pose a threat.

But anglerfish don’t seem to have those issues. Studying the genomes of 10 different anglerfish species, scientists have found these fish have differences in several crucial parts of the vertebrate immune system.

Some species were missing the genes that encoded for a type of antigen found on the surface of somatic cells, and which is known to signal the immune system when invaders arrive.

These are known as major histocompatibility (MHC) antigens, and while they are usually great for our health, they cause a lot of problems during organ and bone marrow transplantation when we want foreign matter to stay.

“Apart from this unusual constellation of MHC genes, we discovered that the function of killer T cells, which normally actively eliminate infected cells or attack foreign tissues during the organ rejection process, was also severely blunted if not lost entirely,” says immunobiologist Jeremy Swann from the Max Planck Institute in Germany.

“These findings hinted at the possibility that the immune system of anglerfishes was very unusual among the tens of thousands of vertebrate species.”

To make these fish even stranger, researchers found some species were missing antibodies – the second major immune defence system, which tag invaders for attack.

In humans, the authors say, the loss of all these immune facilities would most likely kill us.

“The study thus shows that despite several hundred million years of co-evolutionary partnership of innate and adaptive functions, vertebrates can survive without the adaptive immune facilities previously considered to be irreplaceable,” says immunologist Thomas Boehm from the Max Planck Institute.

“We assume that as-yet unknown evolutionary forces first drive changes in the immune system, which are then exploited for the evolution of sexual parasitism.”

Female anglerfish of the species Photocorynus spiniceps, 46 mm, with a 6.2 mm parasitic male fused to her back. (Theodore Pietsch)

Clearly, these fish aren’t completely unprotected. The authors think they must be drawing on some innate immunity to fight off infection – one that doesn’t remember and adapt to pathogens, simply kills them outright.

If that’s true, it undermines a key assumption of vertebrate evolution.

“Our findings challenge the view that, once innate and adaptive immune systems have engaged in co-evolution, neither arm can be eliminated without detrimental consequences,” the authors write.

Instead, it appears that anglerfish have lost key aspects of this adaptive immune system after it evolved among most vertebrates some 500 million years ago.

“We find it remarkable that the unusual mode of reproduction was invented several times independently in this group of fishes,” says evolutionary biologist Theodore (Ted) Pietsch from the University of Washington.

Among the genomes studied, the authors actually identified several stages of this strange evolution in action. The less strong the physical attachment between mates, the more the anglerfish immune system resembled other vertebrates.

As of now, we can’t say for sure why these anglerfish have adapted such odd immune systems, but it seems likely that it’s somehow tied to their strange reproductive habits. And these are most likely driven, in some way, by their lonesome environment.

When there’s no hope for life outside of love, it seems these fish will give up up just about anything for a life partner, their fins, their eyes, their immune systems, and even their organs.

“There’s basically no integrity at this point,” Pietsch told The New York Times.

The study was published in Science.

Watch a Tiny Robot Blob Transform Into Even Tinier Bits to Squeeze Through Cracks
The Orbit of a Sun-Like Star Reveals The Nearest Black Hole Ever Found
A New FRB Signal Has Buzzed Nearly 2,000 Times in Just Two Months, Raising a Mystery
Dinosaurs Were Already on Their Way Out Before Asteroid Hit, Another Study Finds
Ancient Maya Cities Appear to Have Been Riddled With Mercury Pollution