There are plenty of animals that have the ability to count, even without the use of language. But of all the non-human species in the world, the Asian elephant (Elephas maximus) appears to be the true mathematician.

New research has found that Asian elephants have an exceptional way with numbers that appears to be unique in the animal kingdom.

Unlike other animal species, which tend to base their counting on inaccurate quantities instead of absolute numbers, the Asian elephant appears to have a numerical understanding that is closer to humans.

“This study provides the first experimental evidence that nonhuman animals have cognitive characteristics partially identical to human counting,” writes the team led by Naoko Irie, an expert in numerical cognition at the Graduate University for Advanced Studies in Japan.

While three elephants were chosen for the study, only one of them – a 14-year-old female named Authai – was able to make it past the training sessions.

It was here that Authai learned how to use a touch-screen panel so that she could pick images on the screen with her trunk.

The purpose of the study was to figure out whether Asian elephants could judge relative quantity.

For each round of testing, Authai was given two images to compare, each containing different amounts of fruit from zero to ten; the goal was to pick the box with the most fruit. Each time she got a comparison right, she was rewarded with a small piece of fruit.

To ensure that Authai wasn’t just choosing the most crowded image, rather than the image with the greatest number, the illustrations of fruit were all varied in size.

Her keeper was also forced to stand three metres off, facing away from the touch-panel so that they couldn’t give away any unintended cues.

All in all, Authai correctly identified the image with the greater number of fruit 181 out of 271 times. That is roughly 67 percent and indicates a result that’s somewhat better than pure chance. 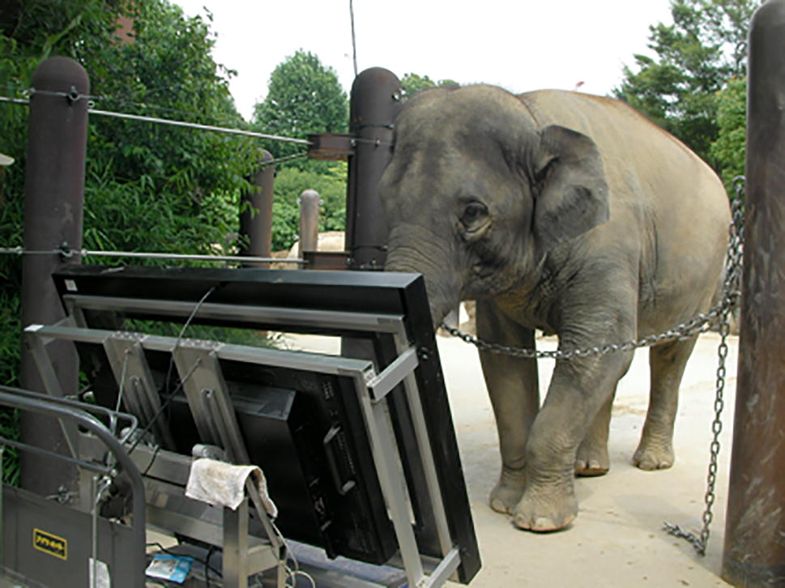 Where other animals have failed, Authai succeeded. Her mathematical performance was not affected by the magnitude of fruit, the distance between the individual fruit, or the ratio of fruit between the two images.

Similar to humans, Authai’s reaction time did drop somewhat when the distance between fruit was decreased or the ratio between images was enlarged – most likely because these were difficult and more intricate comparisons that required greater analysis.

All of this is consistent with human counting. The only difference is that humans take longer to count with increased magnitude as well.

“We found that her performance was unaffected by distance, magnitude, or the ratios of the presented numerosities, but consistent with observations of human counting, she required a longer time to respond to comparisons with smaller distances,” explains Irie.

So far, it seems that the Asian elephant is the only animal species, other than humans, that can judge relative quantity. Not even the two species of African elephants have displayed such mathematical prowess.

Irie says that might be because the African elephant species diverged from the Asian elephant more than 7.6 million years ago. Within this massive span of time, it’s probable that they each developed different cognitive abilities.

But more research is obviously needed. One example is not enough to make a sweeping statement about the entire species, although it’s still a rather exciting discovery.

To find out if more Asian elephants can do what Authai did, the authors suggest future studies should continue comparing the intelligence of these elephants with other non-human species.

This study has been published in the Journal of Ethology.

Ancient Goo Spills The Secrets of How The Egyptians Mummified Their Dead
This Small Australian Marsupial Is Quite Literally Dying For Sex
Could ‘The Last of Us’ Ever Happen? The Real Risks of a Fungus Pandemic
‘Polluted Realism’: How Monet’s Art Mirrors The Evolution of Smog
Lightning Strikes Create a Strange Form of Crystal Rarely Seen in Nature