Miniaturised frogs form a fascinating but poorly understood group of amphibians. They have been exceptionally prone to taxonomic underestimation because when frogs evolve small body size they start to look remarkably similar – so it is easy to underestimate how diverse they really are.

As part of my PhD I have been studying frogs and reptiles on Madagascar, an island in the Indian Ocean that’s a little larger than mainland France. It has more than 350 frog species, giving it possibly the highest frog diversity per square kilometre of any country in the world. And many of these frogs are very small.

We have added to the knowledge of these tiny species by describing five new species as belonging to the group of frogs commonly referred to as “narrow-mouthed” frogs. The largest of them could sit happily on your thumbnail. The smallest is just longer than a grain of rice.

We’ve dubbed three of the new species as “Mini” – a group that is wholly new to science.

When a whole group or “genus” like this is new to science, it needs a name, so that information about it can be accumulated with a fixed anchor.

We also wanted to have a bit of fun. And so, we named the species Mini mum, Mini scule, and Mini ature.

Adults of the two smallest species – Mini mum and Mini scule – are 8–11 mm, and even the largest member of the genus, Mini ature, at 15 mm, could sit on your thumbnail with room to spare.

The other two new species, Rhombophryne proportionalis and Anodonthyla eximia, are also just 11–12 mm, and are much smaller than their closest relatives.

The frogs we identified belong to three different groups that are not closely related to one another, and they have independently evolved to be much smaller in body size.

Our findings tell us that the evolution of body size in Madagascar’s miniature frogs has been more dynamic than previously understood. And future studies will hopefully shed light on the interplay between the ecology and evolution of these remarkably diverse frogs. 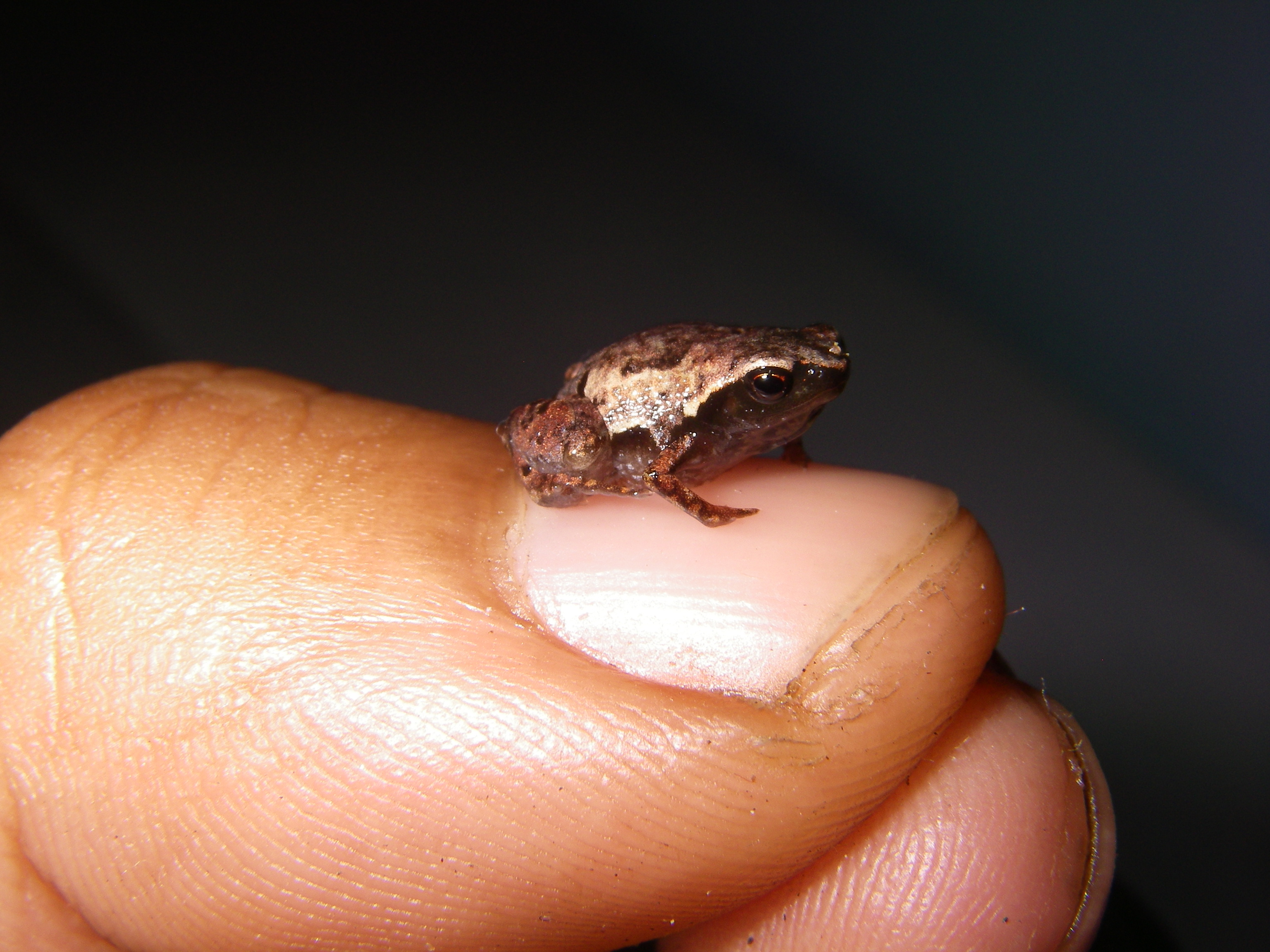 An adult male “Mini mum”, one of the world’s smallest frogs. (Andolalao Rakotoarison)

The “narrow-mouthed” frog species is part of a highly diverse family found on every continent except Antarctica and Europe. But the frogs we found on the island belong to the subfamily Cophylinae which is endemic to Madagascar.

The subfamily has a particularly large diversity of miniaturised species which, based on their small size, were historically attributed to the single genus Stumpffa.

Although most narrow-mouthed frogs are small to moderately large, many are tiny, including the smallest frog in the world, Paedophryne amauensis from Papua New Guinea. It’s adult body size is 7.7 mm. That’s about the length of your average Tic Tac sweet.

What’s remarkable is that the smallest frogs have evolved to become tiny again and again, often several times within a single region, as highlighted in this new study. This means there must be some kind of advantage to being a tiny frog or something that allows tiny frogs to survive, thrive, and diversify. Mini mum is from Manombo in eastern Madagascar. It is one of the smallest frogs in the world, reaching an adult body size of 9.7 mm in males and 11.3 mm in females. It could sit on a thumbtack.

Mini scule from Sainte Luce in southeastern Madagascar is slightly larger and has teeth in its upper jaw.

Mini ature from Andohahela in southeast Madagascar is larger than its relatives but is similar in build.

Rhombophryne proportionalis from Tsaratanana in northern Madagascar is unique among Madagascar’s miniaturised frogs because it’s a proportional dwarf, meaning it has the proportions of a large frog, but is only about 12 mm long.

This is very unusual among tiny frogs, which usually have large eyes, big heads, and other characters that are “baby-like”; so-called “paedomorphisms”.

Anodonthyla eximia from Ranomafana in eastern Madagascar is distinctly smaller than any other Anodonthyla species. It lives on the ground, providing evidence that miniaturisation and terrestriality may have an evolutionary link.

Maybe getting really small makes it hard to stay up in the trees.

Finding tiny frogs in the leaf litter is hard work. We often spend months in the forest, under very difficult conditions, trying to find frogs and reptiles. Because of their size, the tiny frogs are exceptionally hard to find so the trick is to listen for their calls, and then track them.

But calling males often sit one or two leaves deep and stop calling at the slightest disturbance. When you eventually find a frog, you record its call and then try to catch it – a very tough exercise.

Then there are other challenges. Cyclones often batter Madagascar’s eastern coast in the December–March rainy season, which can make searching even more difficult.

We found Anodonthyla eximia in the early morning after a terrible night, when a cyclone swept away most of the camp. Miserable conditions for biologists can make great conditions for frogs.

Madagascar is a treasure trove of biodiversity. We already know hundreds of species of reptiles and amphibians from the island and, because we have DNA information on a lot of species that are not yet named, we also have a sense for how much we don’t know about that diversity.

It is one of the best places in the world to study reptiles and amphibians and their evolutionary processes. But we are aware that we’re working in a very tight time frame. Madagascar’s forests are dwindling at an astounding rate. It is one of the poorest countries, and with growing populations, the forests bear the brunt of human needs.

Conservation work in the country is intensifying, but there is still a long way to go before we can consider species like Mini mum and Mini scule safe for the foreseeable future.

Hidden ‘Hunger Stones’ Reveal Drought Warnings From The Past
The Moon Stole Something From Deep Inside Earth Eons Ago, and Scientists Can Prove It
‘Extreme Heat Belt’ to Snare 100 Million Americans in Decades, Scientists Warn
A Snake-Lover Built Robotic Legs For a Snake, and It’s Insane
A Nuclear War Could Starve Billions, But One Country May Be Safer Than The Rest