They’re one of the weirdest, most incongruous-looking natural phenomena you could ever see on Earth’s surface: massive dagger-shaped blades of vertically aligned ice, assembled in mysterious flocks in the middle of the desert.

These strange ice spire formations – called ‘penitentes‘ due to their resemblance to penitent, praying folk – take shape at high altitudes in cold, dry environments, like the hyper-arid wilderness of the Atacama Desert in Chile.

But their jagged frostiness in the parched land is not the same as lack of hospitality. As it happens, these eerie congregations – aka nieves penitentes – are actually a shelter for invisible life forms.

In a new study, a team of scientists led by researchers from the University of Colorado Boulder trekked up the side of the world’s second-highest volcano, Chile’s Volcán Llullaillaco, and found microbes making a home amongst these silent shards. 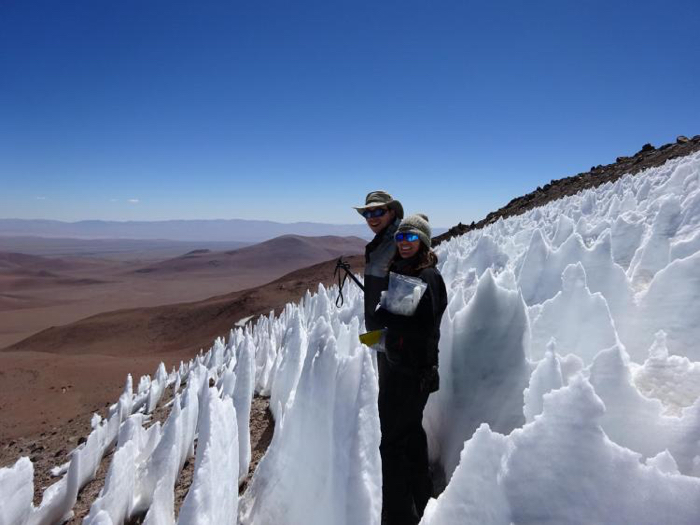 “Snow algae have been commonly found throughout the cryosphere on both ice and snow patches, but our finding demonstrated their presence for the first time at the extreme elevation of a hyper-arid site,” says microbial biology researcher Lara Vimercati.

“Interestingly, most of the snow algae found at this site are closely related to other known snow algae from alpine and polar environments.”

At an elevation of around 5,000 metres (16,000 ft) above sea level, Llullaillaco’s icy penitentes revealed patches of red colouration, which the team says is a pigment-based signature of microbial activity in snow and ice formations.

Taking samples back to the lab, the researchers identified microbes dominated by the algal genera Chlamydomonas and Chloromonas – the first time, the team says, that scientists have reported microbial life inhabiting these strange ice structures.

“Given the harshness of the environments where they are found, nieves penitentes may represent oases for life, because, along with fumaroles [gassy vent-like openings in Earth’s crust], they represent intermittent water sources in these very arid environments,” the authors explain in their paper.

It’s not just a new discovery for life on Earth, either, as the implications of the research might extend even further, hypothetically speaking. 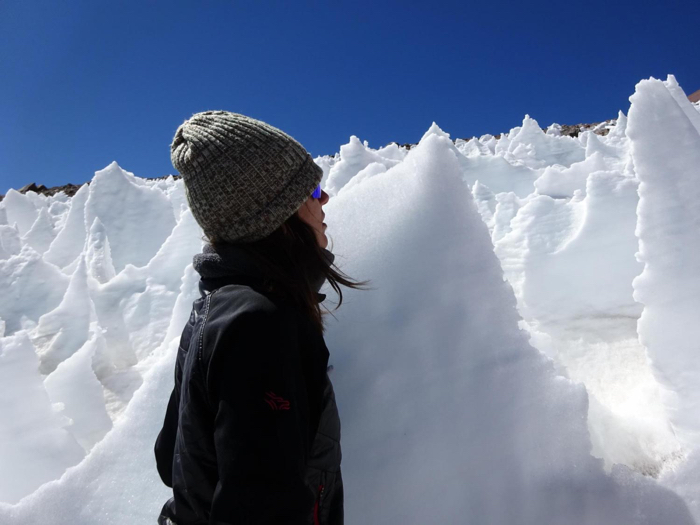 Analogues for Earth’s own icy penitentes have been identified in towering shard-like structures on Pluto and on Jupiter’s Moon Europa – and if the icy shards act as a watery oasis for life in the dry Andes, it’s just possible that the same could hold elsewhere in the Solar System.

“This first report of snow algae occurring in penitente ice opens the door to future work that will address the altitudinal limits of these communities,” the researchers conclude.

There’s still much to learn about how these microbial populations got to their dagger-shaped homes, the team says – including figuring out whether they contribute to the formation of the shards somehow, or simply migrate there afterwards.

While the answers may be hard to come by given the difficulty of travelling to the extreme, remote environments in which penitentes arise, future science beckons nonetheless.

“We’re generally interested in the adaptations of organisms to extreme environments,” says one of the team, microbial ecologist Steve Schmidt.

“This could be a good place to look for [the] upper limits of life.”

The findings are reported in Arctic, Antarctic, and Alpine Research.