The story of Archaeopteryx – a Late Jurassic dinosaur known as ‘the first bird‘ – begins with a single, fossilised feather. But like any great scientific tale, that is far from where it ends.

Today, 158 years after the initial discovery, one of the world’s most famous birds remains up in the air. Scientists now think the presumed owner of this feather is based on a hasty assumption, an old error that could give way to a brand new species of bird-like dinosaur.

Discovered in 1861, within the Solnhofen Quarry in southern Germany, this ancient, isolated plume was the very first evidence of Archaeopteryx lithographica, which means old wing.

Shortly after, a complete skeleton of another ancient animal was also unearthed in the same limestone quarry, and it too was thought to have feathers.

At the time, the conclusion seemed simple. Scientists figured these two discoveries must belong to one another, meaning they are both examples of Archaeopteryx.

Preserved within the limestone quarry for roughly 150 million years, palaeontologists have since discovered no less than 10 Archaeopteryx skeletons.

When you’re trying to decipher ancient animal remains however, the details are everything. Using advanced imaging technology, and international team of scientists now thinks that this holotypic feather does not belong to the Archaeopteryx after all.

In all likelihood, the authors argue, the feather came from another feathered dinosaur, one that has so far eluded recognition.

The mistake hinges on the mystery of the feather’s “missing quill” – the hollow tube that typically attaches the feather to a follicle in the bird’s skin.

Today, the impression of this fossilised feather is nothing more than a dark film. And even though the original description details a long quill running down the middle, half a century later, it can no longer be seen, not even by X-ray fluorescence or UV imaging. (The University of Hong Kong)

The existence of this quill has been debated for years, and without it, it’s been impossible to tell what body part the feather truly came from. With the help of laser-stimulated fluorescence (LSF), however, all of that has changed.

“It is amazing that this new technique allows us to resolve the 150-year-old mystery of the missing quill,” says co-author Daniela Schwarz, a curator for the fossil reptiles and bird collection of the Museum für Naturkunde, Berlin.

But while the new imaging confirms that the quill did, in fact, exist, its curious shape does not fit the other Archaeopteryx specimens.

Like modern birds, the primary feathers of Archaeopteryx – the large ones used for flight – are thought to have been relatively straight. But the researchers note the quill they found has a curvature that is far too severe to be from the same bird.

While most primary feathers have an s-shaped curve to their quills, this particular quill is more of a c-shape. In fact, its size and shape don’t even work as a secondary wing – the smaller feathers that provide lift – or as a tail feather of Archaeopteryx. 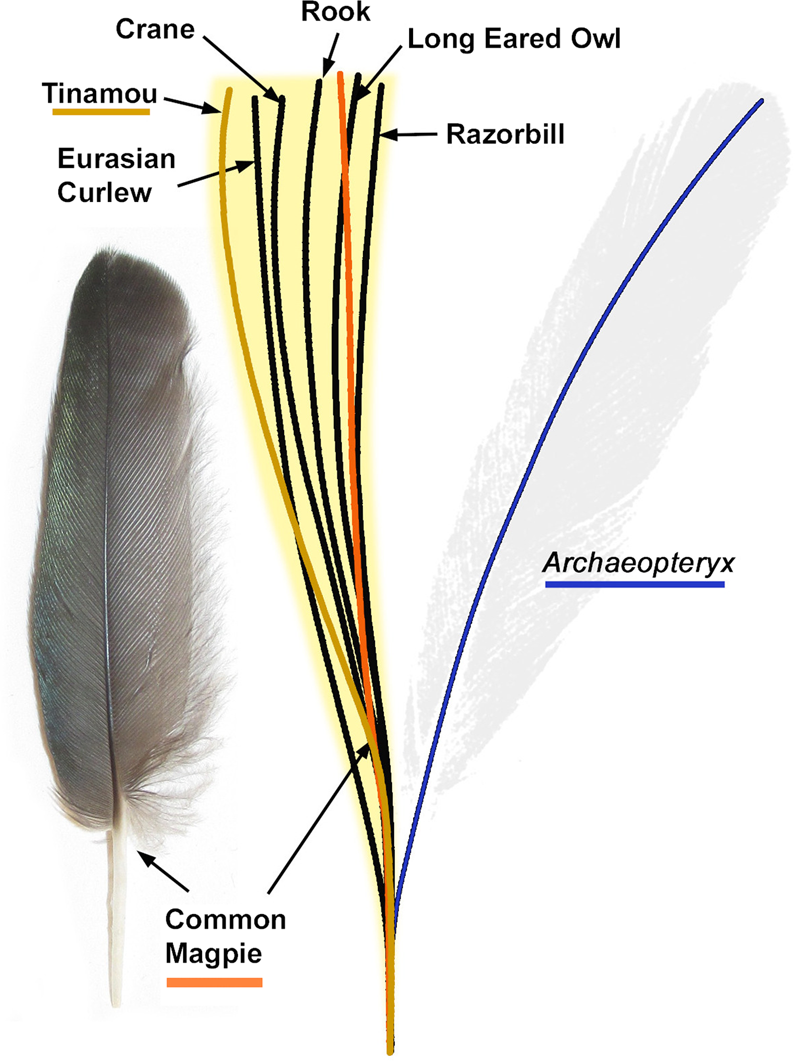 (The University of Hong Kong)

It’s like that one exasperating puzzle piece that won’t fit anywhere, no matter how hard you try to find its place in the greater picture.

The only way forward at this point is to create a new picture. Using the available evidence, the authors argue this feather must belong to another ancient animal, one that is not so different from Archaeopteryx.

“The feather remains an enigma so we caution against the isolated feather’s association with Archaeopteryx,” the authors conclude.

This study has been published in Scientific Reports.

A Billion-Dollar Biotech Company Plans to Bring The Dodo Back to Life
It’s Possible Neanderthals Evolved So They Wouldn’t Smell Their Own Stink, Study Finds
Bar Graphs Induce a Hidden Bias in Interpretation, Experiment Shows
Scientists Discover a Weird New Form of Ice That May Change How We Think About Water
NASA Rover Encounters Spectacular Metal Meteorite on Mars