Sometimes our eyes play tricks on us, and sometimes, we play tricks on them. Optical illusions have entranced neuroscientists for decades, but these false messages have probably been going on much longer than we’ve been studying them.

New research has found the eyes of fruit flies are just as easily fooled by static visual patterns with high contrast, seeing motion where there is none.

For an invertebrate with compound eyes (which, close up, look kind of like an optical illusion themselves), that’s a remarkable similarity, and it exists even after millions of years of divergent evolution. 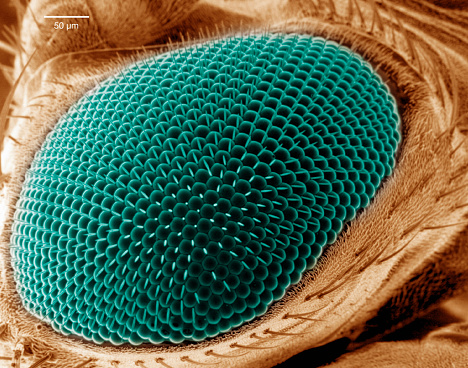 “The last common ancestor of flies and humans lived half a billion years ago, but the two species have evolved similar strategies for perceiving motion,” says neuroscientist Damon Clark from Yale University.

Combining behavioural measurements, genetic silencing, and neural imaging, the team has concluded that fruit flies (Drosophila melanogaster), like vertebrates, perceive illusory motion in stationary images because they hold the same basic brain circuitry as us – ours is just more complex.

Traditionally, it was thought that fly eyes and human eyes arose quite differently in evolution, but recent genetic research has found the same underlying genetic basis for the eye in all animal phyla.

Subsequently, some scientists have argued that there was only one original eye, which then branched off into various different forms over millions and millions of years.

And the similarities are still clear to see. Previous research on optical illusions has shown non-human primates, cats, and fish can all be tricked into seeing motion where there is none. But it’s never been shown on a creature as evolutionarily distant from us as the fruit fly.

Which is a shame, because fruit flies have small brains that allow scientists to closely examine the activity of neurons.

“It was exciting to find that flies perceive motion in static images the same way we do,” says Clark.

Mostly because it’s given us a glimpse at what’s going on in our own brains. No one’s really sure what it is about optical illusions that overrule the most reasonable parts of our brains.

Some evidence suggests we see motion in these static images because the pictures generally have a higher contrast, which our brains process faster, presenting data to the brain in an order that generates an illusion of motion (black → dark gray → white → light gray → black).

Other evidence attributes the effect to the tiny, involuntary jerks our eyes make when they are examining something. Both could very well be true at the same time.

Because we already know so much about Drosophila brains, the researchers were able to put the fruit flies to the test, and then use neural imaging to understand the results.

When flying near a stationary image with illusory motion, like the one below, the fruit flies turned towards the picture, which indicates they were seeing sustained movement.

(Illusion credit to A. Kitaoka; illustrated by R. Tanaka)

In the fruit fly brain, motion is detected first by direction-selective neurons T4 and T5, and these respond to sharp contrast edges.

When the authors abolished these elementary motion detector neurons, the illusion of motion disappeared.

Further neural imaging revealed T4 and T5 were working in opposite directions. By turning off just one of these neurons, the authors had the fruit flies turning in the opposite direction to what they would have done if both neurons were active.

This suggests there’s a small imbalance between these motion detectors and how the flies do or don’t respond to the stimulus.

“When we adapted human observers to moving light edges or dark edges,” the authors explain, “we could manipulate the magnitude and direction of their percepts as well, suggesting that mechanisms similar to the fly’s may also underlie this illusion in humans.”

Therefore, they argue, there’s something in the architecture of our brains that’s driving this illusion of motion, and this could help explain why high contrast and micro movements of the eye in certain directions have become culprits in the illusion as well.

The study was published in PNAS.

Reconstruction of The First Mammal’s Genome Suggests It Had 38 Chromosomes
Haunting Photo Captures Million-Mile-Long Plume Shooting Out of The Sun
Unique Remains of What Could Be The World’s Largest Bird Found in Australia
What Exactly Does It Mean to Die of ‘Old Age’?
Discovering Even Friendly Aliens Could Have Some Real Risks For Humanity