You’d think it would be easy to spot a whale shark having sex – after all, they’re amongst the largest creatures on Earth. But to this day, we have no record of their encounters, even though this week one human did get tantalisingly close.

Flying above the remote Ningaloo reef in Western Australia, pilot Tiffany Klein caught a sneaky peak under the ocean’s covers. At the time, she was tracking a 9-metre-long (30 feet) male whale shark, which was swimming with a tour of snorkelling humans for about an hour.

During this time, Klein noticed that the young male was swimming erratically, and so, after the tourists left, she notified a research boat below. It was then that she realised what the huge fish was headed for – a small female whale shark.

Klein immediately took out her camera. On the boat below, CSIRO research scientist Richard Pillans watched the male catch up with the young female.

“… and then there was this huge big swirling and the male basically turned upside down,” he told ABC News.

Like other sharks, whale sharks don’t just have one penis. Instead, their genitalia is made up of two penis-like organs called ‘claspers’, which are every bit as aggressive as they sound and are used to transfer their semen from multiple angles.

“As you can see from the aerial images he was completely upside down, his clasp or his male reproductive organs are flared and he’s attempting to mate with this female,” Pillans further explained to the ABC.

“Unfortunately for him the female wasn’t mature, she was too small to be a mature female, so his attempts were brushed aside, but nevertheless the fact that that behaviour is taking place is extremely important.”

From above, Klein watched the rejected whale shark swim off without success. 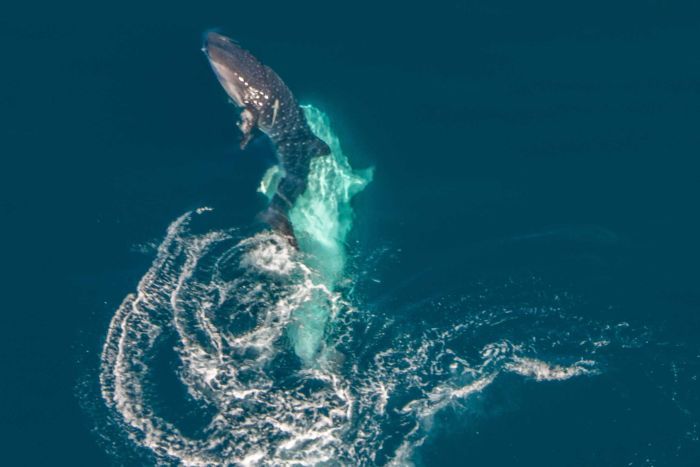 Shark researcher George Burgess, who did not witness the event firsthand, explained to Live Science what he thought was going on. The erratic swimming, he explains, was probably a way of capturing the female’s attention, sort-of like the peacocking behaviour seen in birds.

“Whether he was successful or not, this is the first time we’ve seen an attempted copulation by a male whale shark with a female,” said Burgess.

In the end, however, the juvenile female was probably too bent on feeding to notice the male’s attention.

Whether successful or not, an attempt like this has never been seen before, let alone captured on video. Even today, information on the biology of whale sharks is scant, and it’s still unclear when exactly they hit sexual maturity.

The whale sharks at Ningaloo are thought to be teens who are roughly 30 years old; these fish are thought to not be sexually active until they are at least eight metres in length.

Adult females and males are rarely found in the area. In fact, scientists aren’t even sure where they are. Whale shark habitat is thought to span the entire globe, and despite their size, these are extremely elusive creatures.

In 1953, a whale shark embryo was trawled off the coast of Texas, leading scientists to believe these creatures laid eggs. In 1995 however, a pregnant female harpooned near Taiwan was found carrying 300 embryos in various stages.

Scientists now think that whale sharks utilise yolk-dependent viviparity, which is when an embryo develops inside the body of a parent but relies almost solely on the yolk sac of an egg.

Finding a place where whale sharks might try and copulate, like Ningaloo, could help refine our search and also solve more than one lingering mystery.

Earth’s Days Are Mysteriously Getting Longer, Scientists Say
Robot Shows It’s Possible to Swim Through The Emptiness of a Curved Universe
The Moon Stole Something From Deep Inside Earth Eons Ago, and Scientists Can Prove It
Ancient Maya Used Ashes of Rulers to Make Rubber Balls, Some Researchers Suggest
It Really Is in Your Head: Thinking Hard and Long Can Cause Brain Drain