Two gorillas at Virunga National Park in Congo have taken the Internet by storm by posing – on two feet – in a photograph with park rangers.

The rangers posted a selfie on Facebook late last week showing two orphaned female gorillas, Ndakazi and Ndeze, standing tall beside them in the Senkwekwe Center for orphaned mountain gorillas.

A park official said the gorillas appeared to be imitating their caregivers, who had raised them.

“Another day at the office,” the caption read. 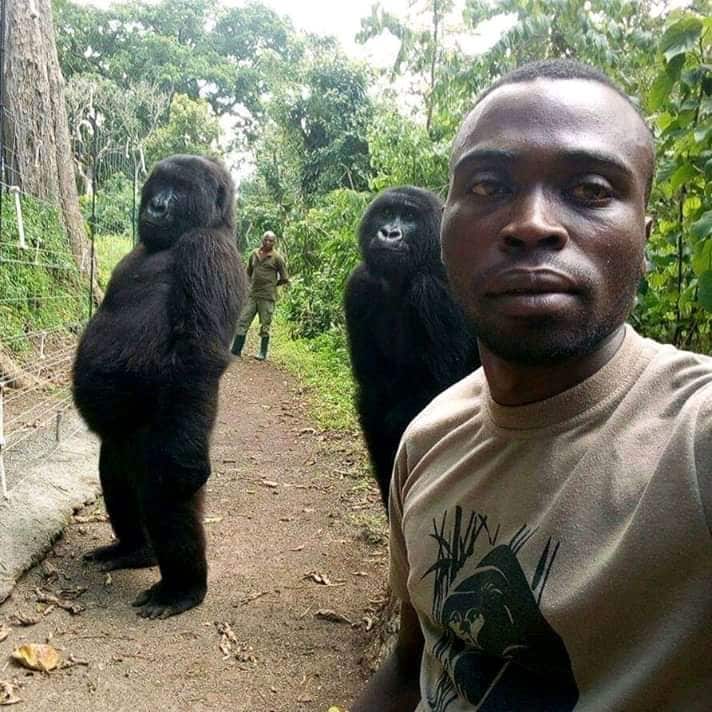 Innocent Mburanumwe, deputy director of Virunga National Park, told BBC Newsday that, in the picture, the apes look like humans, “like soldiers saluting a flag.”

He said that because they grew up around humans, they have learned to imitate such behaviors.

Virunga National Park said in a Facebook post on Monday that the photo is real, saying, “Those gorilla gals are always acting cheeky so this was the perfect shot of their true personalities! Also, it’s no surprise to see these girls on their two feet either – most primates are comfortable walking upright (bipedalism) for short bursts of time.”

Roberta Salmi, director of the Primate Behavioral Ecology Lab at the University of Georgia, told The Washington Post that apes in the wild are known to use stand-up postures for various things, such as to reach fruit in trees, wade through water or display dominance.

For instance, she said, a western lowland silverback gorilla may stand up and beat his chest in a show of aggression toward another male.

Salmi said that she has never seen a wild western lowland gorilla stand simply to look around but that she has seen videos of ones in captivity standing to get attention from tourists.

Frans de Waal, a primatologist and psychology professor at Emory University, said in an email to The Washington Post that animals, in general, are inclined to imitate their human caretakers, mimicking facial expressions and postures, for instance.

Primates are even more likely to do so, he said, because they have “similar bodies” that make it easier.

“Anthropologists make a big deal about humans being bipedal, but it really is not hard at all for apes,” he added.

The question is: How do primates connect with humans in their world, and why would they want to imitate them?

Decades ago, celebrity gorilla Koko helped the world see how primates can bond and communicate with humans.

Through work with psychologist Francine “Penny” Patterson, Koko appeared to learn an adapted version of American Sign Language dubbed “Gorilla Sign Language”, or GSL. However, scientists have long debated to what extent the gorilla understood that language.

De Waal said the reason gorillas imitate human behavior is “not because they think it is fun” but because “they identify with those who take care of them.”

“Apes are naturally imitative (hence the verb aping) and a parent is imitated more than others. Imitation is often driven by attachment,” he added.

Ndakazi and Ndeze were taken to Virunga National Park’s mountain gorilla orphanage in summer 2007 after their mothers were killed in poaching incidents, Mburanumwe told BBC Newsday.

He said that, at the time, one gorilla was about 2 months old and the other was about 4 months old.

Since then, he said, the apes have been raised by the rangers, “so they are considering that those rangers are their parents.”

As for the photo, the Virunga National Park said in a Facebook Post, “We want to emphasize that these gorillas are in an enclosed sanctuary for orphans to which they have lived since infancy. The caretakers at Senkwekwe take great care to not put the health of the gorillas in danger. These are exceptional circumstances in which the photo was taken. It is never permitted to approach a gorilla in the wild.”

But Mburanumwe admitted it was “very funny” and “very curious” to see the apes imitating their human parents.

Scientists Discover An Immense, Unknown Hydrocarbon Cycle Hiding in The Oceans
Hubble’s Closeup of The Orion Nebula Looks Like a Surreal Dreamscape
A Snake-Lover Built Robotic Legs For a Snake, and It’s Insane
Scientists Just Broke The World Record For The Most Powerful Stable Magnetic Field
Many Cat Lovers Are Giving Their Cats Unwanted Affection, Study Suggests