On Dec. 22 at 9:03 pm local time, a 64-hectare (158-acre) chunk of Anak Krakatau volcano, in Indonesia, slid into the ocean following an eruption. This landslide created a tsunami that struck coastal regions in Java and Sumatra, killing at least 426 people and injuring 7,202.

Satellite data and helicopter footage taken on Dec. 23 confirmed that part of the southwest sector of the volcano had collapsed into the sea. In a report on Dec. 29, Indonesia’s Center of Volcanology and Geological Hazard Mitigation said that the height of Anak Krakatau went from 338 meters (1,108 feet) above sea level to 110 meters (360 feet).

My colleagues and I published a study in 2012 looking at the hazards this site posed and found that, although it was very difficult to forecast if and when Anak Krakatau would partially collapse, the characteristics of the waves produced by such event were not totally unpredictable.

Although most tsunamis have a seismic origin (for example, the Sumatra, Indonesia one in 2004 and at Tohoku, Japan in 2011), they may also be triggered by phenomena related to large volcanic eruptions.

Tsunamis caused by volcanoes can be triggered by submarine explosions or by large pyroclastic flows – a hot mix of volcanic gases, ash and blocks travelling at tens of miles per hour – if they enter in a body of water. 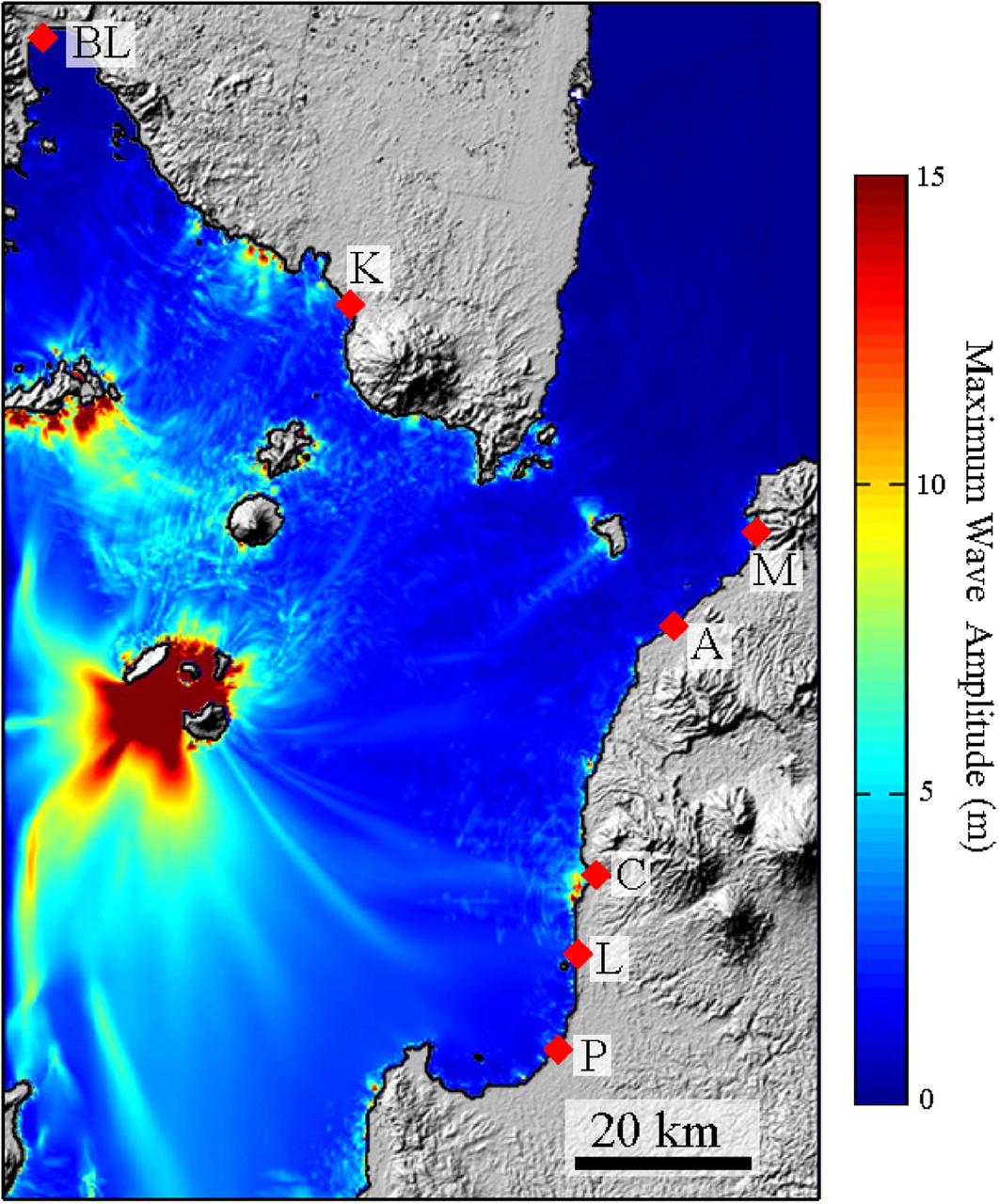 A simulation of an Anak Krakatau volcanic event shows waves of 15 meters or more locally (in red). (Giachetti et al. 2012)

Another cause is when a large crater forms due to the collapse of the roof of a magma chamber – a large reservoir of partially molten rock beneath the surface of the Earth – following an eruption.

At Anak Krakatau, a large, rapidly sliding mass that struck the water led to the tsunami. These types of events are usually difficult to predict as most of the sliding mass is below water level.

These volcanic landslides can lead to major tsunamis. Landslide-triggered tsunamis similar to what happened at Anak Krakatau occurred in December 2002 when 17 millions cubic meters (600 millions cubic feet) of volcanic material from Stromboli volcano, in Italy, triggered a 8-meter-high wave.

More recently in June 2017, a 100-meter-high wave was triggered by a 45-million-cubic-meter (1.6-billion cubic-feet) landslide in Karrat Fjord, in Greenland, causing a sudden surge of seawater that wreaked havoc and killed four people in the fishing village of Nuugaatsiaq located about 20 km (12.5 miles) away from the collapse.

These two tsunamis had few fatalities as they occurred either in relatively isolated locations (Karrat Fjord) or during a period of no tourist activity (Stromboli). This was obviously not the case at Anak Krakatau on Dec. 22.

This part of the world is well-experienced with destructive volcanoes. In August 26-28, 1883, Krakatau volcano experienced one of the largest volcanic eruptions ever recorded in human history, generating 15 meter (50 feet) tsunami waves and causing more than 35,000 casualties along the coasts of the Sunda Strait in Indonesia.

Nearly 45 years after this 1883 cataclysmal eruption, Anak Krakatau (“Child of Krakatau” in Indonesian) emerged from the sea in the same location as the former Krakatau, and grew to reach about 338 meters (1,108 feet), its maximum height on Dec. 22, 2018.

Many tsunamis were produced during the 1883 eruption. How they were generated is still debated by volcanologists, as several volcanic processes may have acted successively or together.

I worked on this very problem in 2011 with my colleagues Raphaël Paris and Karim Kelfoun from the Université Clermont Auvergne in France, and Budianto Ontowirjo from the Tanri Abeng University in Indonesia.

However, the short time left in my postdoctoral fellowship had me shift direction away from the 19th-century explosion to focus on Anak Krakatau. In 2012, we published a paper entitled “Tsunami Hazard Related to a Flank Collapse of Anak Krakatau Volcano, Sunda Strait, Indonesia.”

This study started with the observation that Anak Krakatau was partly built on a steep wall of the crater resulting from the 1883 eruption of Krakatau. We thus asked ourselves “what if part of this volcano collapses into the sea?”

To tackle this question, we numerically simulated a sudden southwestwards destabilization of a large part of the Anak Krakatau volcano, and the subsequent tsunami formation and propagation. We showed results projecting the time of arrival and the amplitude of the waves produced, both in the Sunda Strait and on the coasts of Java and Sumatra.

When modeling landslide-triggered tsunamis, several assumptions need to be made concerning the volume and shape of the landslide, the way it collapses (in one go versus in several failures), or the way it propagates. In that study, we envisioned a somewhat “worst-case scenario” with a volume of 0.28 cubic kilometers of collapsed volcanic material – the equivalent of about 270 Empire State buildings.

We predicted that all the coasts around the Sunda Strait could potentially be affected by waves of more than 1 meter less than 1 hour after the event.

Unfortunately, it seems that our findings were not that far to what happened on Dec. 22: The observed time of arrival and amplitude of the waves were in the range of our simulation, and oceanographer Stephan Grilli and colleagues estimated that 0.2 cubic kilometers of land actually collapsed.

Since the landslide occurred, there have been continuous Surtseyan eruptions. These involve explosive interactions between the magma of the volcano and the surrounding water, which is reshaping Anak Krakatau as it continues to slowly slide to the southwest.

Indonesia remains on high alert as officials warn of potentially more tsunamis. As people wait, it’s worth returning to studies that have looked at the potential hazards caused by volcanoes.

Intriguing Meteorite From Mars Reveals ‘Huge Organic Diversity’, Scientists Say
Bar Graphs Induce a Hidden Bias in Interpretation, Experiment Shows
Astronomers Find What May Be a Habitable World 31 Light-Years Away
Scientists Reveal The Most Precise Map of All The Matter in The Universe
AI System Detects Strange Signals of Unknown Origin in Radio Data