Dust plumes are a natural phenomenon, part of Earth’s nutrient cycle. They occur when high-velocity winds pick up tiny dry particles from the Earth’s surface and carry them long distances. Every summer, dust plumes from Africa’s Sahara desert travel across the Atlantic Ocean.

They’re usually not this big, and they often sink into the ocean. But this one’s coming right to America.

Keen satellite eyes have been watching the plume as it developed and headed out to sea. The ESA’s Copernicus Sentinel and Aeolus satellites have tracked the plume’s progress. The plume is so big, it’s earned the nick-name Godzilla.

The meteorological name for the plume is the Saharan Air Layer (SAL). The SAL forms between late Spring and early Autumn. Strong surface winds pick up the dust and carry it into the air and over the Atlantic Ocean.

If conditions are right, the dust can be transported into the upper troposphere, and carried all the way to the Caribbean or the United States, an 8,000 km (5,000 mile) journey.

Records of the Saharan dust plume go back about 20 years, and this one ranks as one of the biggest. It’s common for these dust plume to reach the US, but this one is extraordinarily large. The NOAA says that the plume is about 60 percent to 70 percent larger than average.

The image below is from June 19th, 2020. It’s a composite image from the Copernicus Sentinel-5P satellite and the Aeolus Satellite. The base layer is bright yellow aerosol index from 5P and Aeolus aerosol and cloud formation is laid on top. 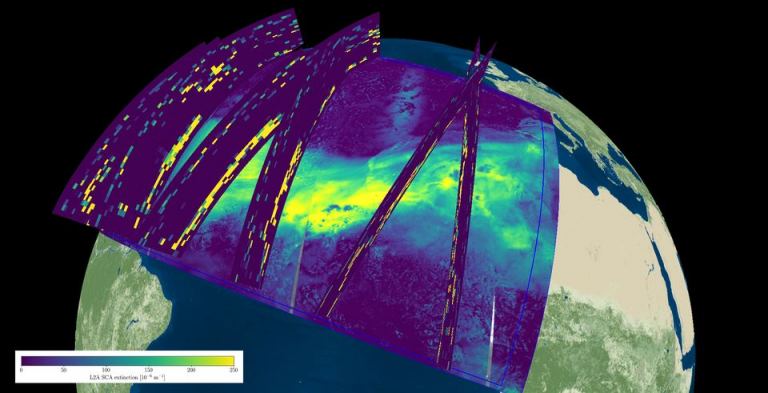 Desert dust plume over the Atlantic observed by Aeolus and Sentinel-5P. (ESA)

The Aeolus data is unique because it’s the first satellite designed to acquire profiles of Earth’s winds on a global basis. It helps build much more sophisticated forecasts and models, partly by determining wind heights with greater accuracy. It can determine the height at which the dust layer is travelling, and in this image, Aeolus shows that most of the dust was 3 – 6 km (1.8 – 3.7 miles) above the ground.

The different space agencies now have a fleet of satellites monitoring Earth, and they can closely watch things like this dust plume. Each satellite can have a different mix of instruments, and together they give a more complete understanding of Earth’s atmospheric happenings. Though its appearance in satellite imagery is foreboding, the dust plume might actually be good news. According to the NOAA, these plumes can actually inhibit the formation of hurricanes. And it can also prevent the ones that do form from becoming more powerful and destructive.

The dust is also a nutrient source for phytoplankton, the tiny marine plants that float near the surface of the ocean. Phytoplankton is critical to the food web, providing food for animals higher up the food chain. Phytoplankton is also photosynthetic, creating oxygen for the biosphere.

The dust plumes also replenish nutrients as far away as the Amazon rain forest. The heavy and frequent rains there can deplete essential nutrients. Without these plumes, the Amazon likely wouldn’t exhibit such stunning biodiversity and may not have such an intricate food web.

But there is bad news associated with the dust plume. The haze can trigger air quality alerts, and can be a health risk, especially for people with underlying health conditions. That’s partly because the dust has travelled so far that many of the larger particles have fallen to the surface. What’s left is the smaller particles, which are most dangerous to people.

But for many people in the path of the plume, the part they’ll remember is the sunsets. With all that dust in the air, the sunsets and sunrises will look stunning.

It Turns Out There Is Such a Thing as Good Gossip, According to New Research
Look Up! Jupiter Will Come The Closest to Earth in 59 Years This Monday
These Are The Most Distant Star Clusters Ever Seen, And We Nearly Missed Them
Narwhals Are So Weird, Scientists Used Chaos Theory to Explain Their Behavior
Bitcoin’s Climate Impact Is Bigger Than Beef Farming – And It’s Only Getting Worse