The Australian wombat has one of nature’s most bizarre superpowers. This pudgy, bear-like marsupial is the only animal we know of that can produce cube-shaped poos.

These unique droppings have long been a biological mystery, although biologists have partially attributed the shape to the incredible dryness of wombat poop. But now we have a new study attempting to solve the mystery, and this time it’s not even from a biologist.

Patricia Yang studies hydrodynamics of fluids at the Georgia Institute of Technology, and when she first heard about the peculiar phenomenon, she knew she had to investigate.

“The first thing that drove me to this is that I have never seen anything this weird in biology. That was a mystery,” says Yang.

“I didn’t even believe it was true at the beginning. I Googled it and saw a lot about cube-shaped wombat poop, but I was skeptical.”

There was only one way to find out – get up close and personal with the blunt end of the animal. Yang and her team were shipped two euthanised roadkill wombats from Australia, and she and her colleague, mechanical engineer David Hu, “opened those intestines up like it was Christmas.” (Uhhh.)

Unwrapping these gifts from nature, the crew of biologists and mechanical engineers found that the oddly shaped pellets were compacted into square-like shapes shortly before they were excreted.

Their findings suggest that it’s not until the last 8 percent of the intestine that a wombat’s waste turns into a solid cube, and this shape is retained even after it’s squeezed through the final exit (which is a normal, round anus). 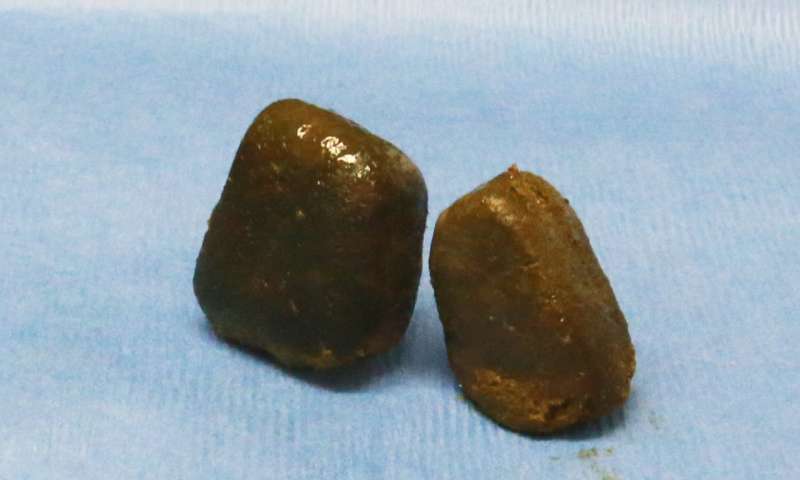 Yang and her team concluded that the well-defined shapes were made by variations in the elasticity of a wombat’s intestinal walls. The stretches of intestine that are less elastic and more stiff are responsible for the sharp edges of the resulting cube, they suggest.

Also, the herbivores end up with really dry and compacted droppings, which in turn helps the pieces retain the shape after they’ve come out.

According to the researchers, the results are quite the find. Cubic structures are rare in biology because their flat surfaces and sharp corners require a lot of extra energy. So understanding how these shapes form in nature is a boon for both biology and mechanical engineering.

Wombats are currently the only known animal that can produce a cubic shape, and the new study suggests it’s all thanks to the soft tissue in their intestines.

“We currently have only two methods to manufacture cubes: We mold it, or we cut it. Now we have this third method,” explains Yang.

“It would be a cool method to apply to the manufacturing process – how to make a cube with soft tissue instead of just molding it.”

By the way @BBCiPM, we’re delighted to say that we now have Wombat poo in our collection…here it is in all it’s cubic glory! pic.twitter.com/Q7C9erGyd8

Some have said that the cubic shapes allow wombats to build a fence of faeces around the borders of their territory. The story goes that wombat’s have poor eyesight and so they need to place their droppings at nose level for other wombats to smell. Unlike a cylinder, which would roll right off any surface, a cube stays put, whether on a log, a rock or wherever else a wombat fancies.

But Mike Swinbourne, a wombat expert at the University of Adelaide in Australia, told National Geographic this is a misconception. He argues it has more to do with the dry habitats that wombats live in.

“They have to really squeeze every drop of moisture out [of their food],” Swinbourne explained.

As such, wombats have some of the driest faeces among mammals, and this means that their scat is more malleable and less likely to fall out of shape.

Sometimes in zoos, where the animals are well-nourished, the shape of wombat poo is visibly less defined.

“Many ideas, some more entertaining than others, have been put forward to explain this, but until this study nobody had ever investigated the cause,” says co-author Scott Carver, a biologist from the University of Tasmania.

“This has been a fantastic collaboration which shows the value of interdisciplinary research for making new scientific discoveries.”

The study was presented at the 71st Annual Meeting of the APS Division of Fluid Dynamics.