At first, Ellie McGrath, or E_graaa as she’s known on Reddit, thought that her chicken Belinda was being attacked.

“She spent a few minutes hopping up and down and clucking making some crazy noises,” McGrath wrote on Reddit.

As it turned out, Belinda, a one-year-old Australorp and Rhode Island Red cross, was at that moment laying what has to be one of the lengthiest eggs known to chicken-kind.

“So, my chicken just laid this monstrosity,” McGrath said as she shared a picture of the huge egg on the perfectly appropriate subreddit, r/WTF. 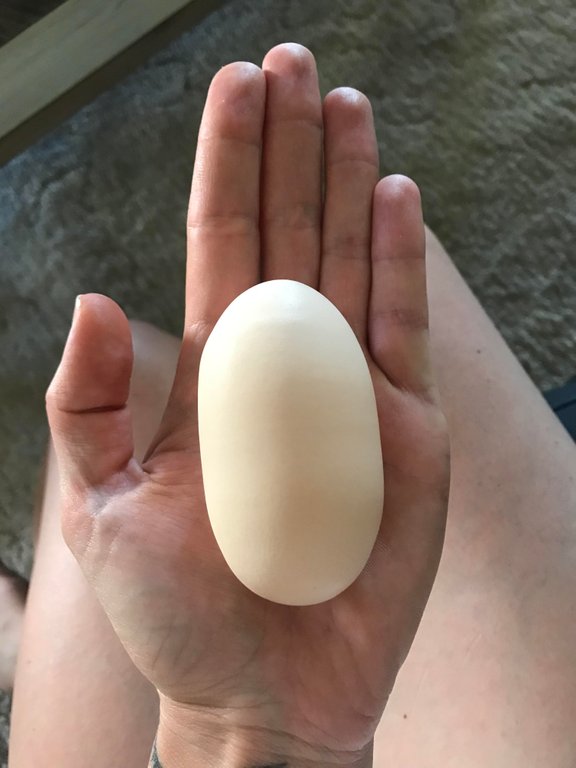 Since the photograph was posted, this unreasonably long egg has received over 30,000 upvotes, 200 comments, and a whole basket full of egg puns.

Whatever it is, it would have hurt like hell.

“She didn’t stop squawking and flapping her wings for a good few minutes,” McGrath told Inverse.

“I didn’t know what the hell was going on… until I saw The Egg.”

While this looks super-freaky to people who’ve only encountered eggs in cartons coming from the supermarket, anyone who raises chickens knows that abnormally shaped eggs are actually quite common.

A hen’s reproductive system is complex, and if a developing egg misses any of the twists and turns of maturation, it can come out looking different from the rest.

A female chick is born with an ovary that contains a lifetime supply of ova. After reaching sexual maturity, a hen’s ovary will begin releasing the yolks into the oviduct. There, the yolk is packaged with a white membrane and its shell.

The whole process takes about a day, and the hens don’t have a lot of time to catch their breath. Thirty minutes later, the whole process will have started all over again.

So it’s no wonder that omissions or errors in this sensitive-yet-rapid process are quite common, and can lead to strange-looking eggs on the inside and the outside.

When a piece of tissue breaks free from the reproductive tract, for instance, it can trick an egg into forming without a yolk. On the other hand, if the release of a yolk is mistimed and two yolks arrive in the oviduct, the egg’s shell may encase them both.

Other abnormalities include soft-shelled eggs, pimpled eggs, eggs without shells at all, and even eggs within eggs (aka egg-ception).

So what exactly happened to Belinda’s egg?

Most of the time, when a large and long egg like Belinda’s is laid, it contains two yolks. But McGrath writes that when she cracked it open, “It was just a normal egg with one mother of a yolk.”

The massive yolk, which took up most of the egg, may have prompted the development of a larger shell in the oviduct, just like two yolks would have – a twist of fate that may have ultimately led to a crazy long egg.

Less than a week later, however, Belinda laid another one, which McGrath posted to Instagram.

Two eggs is definitely more of a pattern than a fluke, and this indicates that there could be something going on with the chicken’s internal anatomy.

Even still, that doesn’t imply something ominous. It’s not uncommon for very young and very old chickens to lay oddly-shaped eggs.

For the pullets (hens that are under a year old), this usually suggests that their reproductive system is just warming up. For the older ones, it has to do with the oviduct slowly losing its shape with age.

So maybe this is some quirk that Belinda will outgrow, or maybe it’s part of what makes her unique.

Either way, McGrath says that Belinda seems happy and healthy. And after laying two monstrous eggs, that’s quite an achievement.

Physicists Used Sound Waves to Give a Tiny Sun Its Own Kind of Gravity
Scientist Accidentally Discovers The Oldest Brain of Any Vertebrate
Incredible Footage Shows Planets Circling a Star Light-Years Away
Bigfoot Has a Very Simple Explanation, Scientist Says
Mysterious Medieval City in Africa Had a Genius System to Survive Drought