It was a different time. Towards the end of the Cretaceous period, North America was cleaved in two by a giant inland sea. Dinosaurs, nearing the end of their reign, still abounded in this hot, wet place. But they had to watch their step, especially by the water’s edge.

In the shallows lurked Deinosuchus: the ‘terror crocodile’. This giant extinct crocodylian was the largest carnivore in its semi-aquatic environment – a powerful apex predator that would feast even on dinosaurs should they stray too close.

Deinosuchus fossils were first found in the US in the 1850s and have been studied for well over a century, but species classifications within the genus have long been debated.

In a new study, researchers from the University of Iowa revisited the existing fossil evidence, and also looked at newly collected fossil specimens. The results of their phylogenetic re-evaluation suggest three distinct species of Deinosuchus can be discerned in the fossil record: the suggested type species D. riograndensis, D. hatcheri, and a newly identified species, D. schwimmeri.

“Deinosuchus was a giant that must have terrorised dinosaurs that came to the water’s edge to drink,” says lead researcher and palaeontologist Adam Cossette, now with the New York Institute of Technology.

“Until now, the complete animal was unknown. These new specimens we’ve examined reveal a bizarre, monstrous predator with teeth the size of bananas.”

While the oldest known Deinosuchus specimen to date is approximately 82 million years old, the researchers say a common ancestral population for all the different species is likely, and would have existed in North America before rising seas led to the Western Interior Seaway cutting the continent in half.

When this happened, the researcher speculate that different environments on the east and west coasts led to evolutionary adaptations that resulted in the slightly divergent morphologies and body sizes of D. riograndensis, D. hatcheri, and D. schwimmeri. 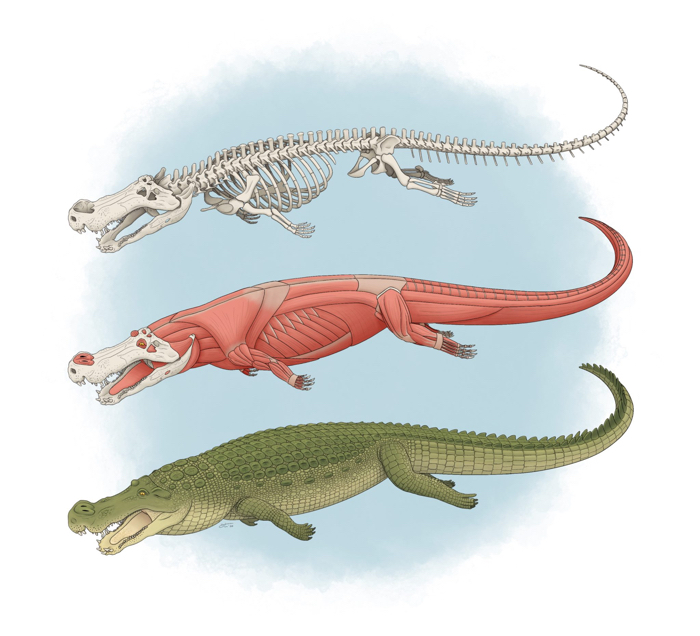 “It was a strange animal,” says palaeontologist Christopher Brochu. “It shows that crocodylians are not ‘living fossils’ that haven’t changed since the age of dinosaurs. They’ve evolved just as dynamically as any other group.”

Based on the fossil evidence, D. riograndensis and D. hatcheri spent their dinosaur-hunting days in the west of North America, from Montana down to northern Mexico. D. schwimmeri, meanwhile, lived along the Atlantic coast, between New Jersey and Mississippi.

Regardless of their coastal affiliations, though, these giant creatures – which ranged up to 10 metres (33 ft) in length – were some of the largest and most fearsome crocodylians ever, and were closer in appearance to modern-day alligators than crocodiles.

“At the time it was living here in the eastern US, there was nothing bigger,” Columbus State University geologist and palaeontologist David Schwimmer told the Ledger-Enquirer.

Schwimmer was not involved with the new study, but was the inspiration for the naming of D. schwimmeri, given his contributions to the field.

“We actually have bite marks from these guys on dinosaur bones. Now, the only question you can ask: Were they scavenging or predatory?” Schwimmer said.

The findings are reported in Journal of Vertebrate Paleontology.

The Frogs Vanished, Then People Got Sick. This Was No Harmless Coincidence.
It’s Not Just Men in Power Who Use Unwanted Sexual Behavior For Gain
A History of Tiny Asteroid Impacts Forced Our Moon to ‘Wander’ on Its Axis
A New FRB Signal Has Buzzed Nearly 2,000 Times in Just Two Months, Raising a Mystery
Engineers Gave a Car a Pair of Eyes to Make Future Roads Safer For Pedestrians