Matter takes many shapes, but most of us are familiar with the basic three states – solid, liquid, and gas. Now, for the first time, scientists have discovered that it’s possible for matter to exist in two of these states at once.

Specifically, the metal potassium can be a solid and a liquid simultaneously, if you treat it just so. Simply apply extreme pressure and extreme temperature and presto! You have a chunk of potassium that is both solid and molten.

“It would be like holding a sponge filled with water that starts dripping out, except the sponge is also made of water,” physicist Andreas Hermann of the University of Edinburgh told Adam Mann at National Geographic.

Potassium is pretty simple. It has a clean, basic crystal lattice structure in its solid form. But when subjected to extreme conditions, strange things can happen to simple metals. 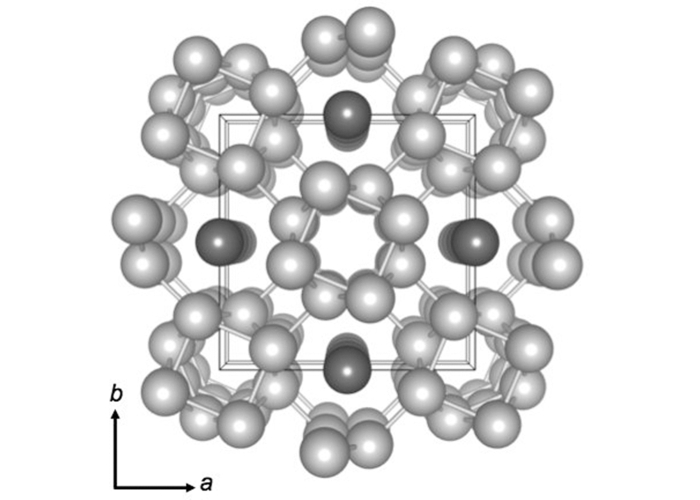 Previous experiments with potassium at high pressure showed that its atoms organise themselves into a complex arrangement – five tubes of atoms in a square formation, four at the corners, and one in the middle; and four chains of atoms bound between them.

When heat is applied, the chains disappear; the researchers called this the “chain-melting transition,” thought to occur as the potassium chains transition from an ordered to a disordered state.

To try and figure out why this was happening, in the latest study researchers used powerful computer simulations to observe the behaviour of around 20,000 potassium atoms under extreme conditions.

When the pressure and temperature are high enough – around 2 to 4 Gigapascals – the potassium atoms arranged themselves in interlinked chains and lattices.

The chemical interactions between the lattice atoms are strong, so they remain an ordered solid when a temperature between 400 and 800 Kelvin is applied. But meanwhile, the chains melt into a disordered, liquid state.

The team is calling this new state the “chain-melted phase”, and believe it may be able to exist across a range of materials, including sodium and bismuth, under the right conditions – which probably vary from the conditions required to induce the state in potassium.

“Potassium is one of the simplest metals we know, yet if you squeeze it, it forms very complicated structures,” Hermann said.

“We have shown that this unusual but stable state is part solid and part liquid. Recreating this unusual state in other materials could have all kinds of applications.”

The research is due to be published in PNAS.

Weird Creature With No Butt May Not Be Our Ancient Ancestor After All
Scientists Have Found A New Way to Detect Alien Worlds Beyond Our Solar System
Scientists Put Trackers on Moths, And It Revealed an Incredible Journey in The Sky
It Really Is in Your Head: Thinking Hard and Long Can Cause Brain Drain
Scientists Discover An Immense, Unknown Hydrocarbon Cycle Hiding in The Oceans