It’s the first time this structural state has ever been observed in gold, suggesting properties that could help scientists refine their understanding of how elements behave under pressure.

Gold is a fascinating element. It’s among the least reactive, and its crystalline structure is predicted to be stable at incredibly high pressures.

The arrangement of atoms in gold follows what’s called a “​face centred cubic” (fcc) structure. Put simply, the atoms in gold form cubes, with an atom at each of the corners, and another atom in the centre of each of the faces (you can see what this looks like in the image below). Gold, silver, platinum, silver, aluminium and nickel all have this structure. 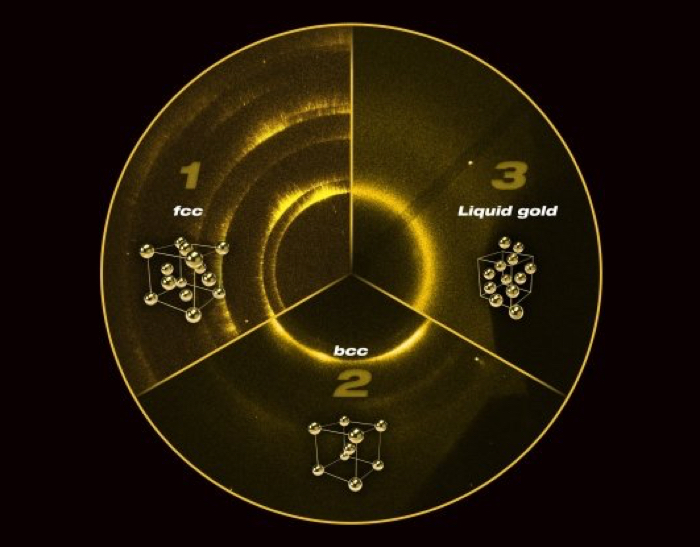 Previous experiments have shown that in gold, the fcc structure remains stable even at pressures up to three times that found at the centre of Earth. It’s one of the properties that makes gold highly useful for setting a pressure standard in experiments with diamond anvil cells - devices used to generate extremely high pressures in the lab.

But usually, the pressure is applied gradually. Under shock compression, scientists at the Lawrence Livermore National Laboratory have now observed something different.

At 223 GPa (gigapascals) – that’s 2.2 million times Earth’s atmospheric pressure at sea level – the gold rearranges into a less tightly-packed “body centred cubic” (bcc) structure, the two structures coexisting as the metal transitions from one to the other. 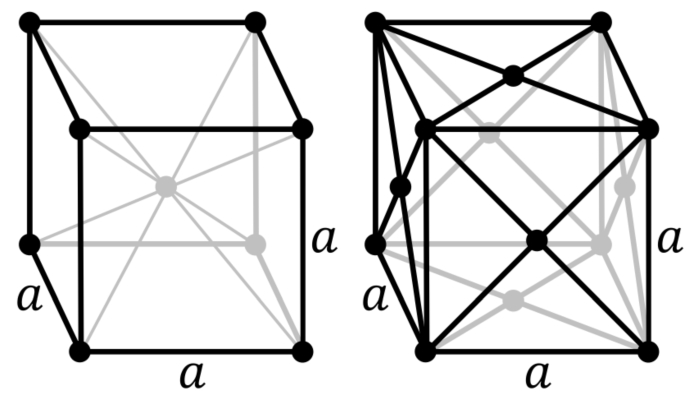 As the name implies, bcc is also a cubic structure with an atom on each of the corners; but, rather than atoms on each of the faces of the cube, there is just one in its centre (see above). Bcc is typically seen in harder metals such as lithium, tungsten, sodium, chromium and potassium.

While physicists are familiar with the shift between fcc and bcc structures in metal works such as steel manufacturing, this phase change hasn’t been previously documented in gold.

“We discovered a new structure in gold that exists at extreme states – two thirds of the pressure found at the centre of Earth,” said physicist Richard Briggs of the Lawrence Livermore National Laboratory.

“The new structure actually has less efficient packing at higher pressures than the starting structure, which was surprising considering the vast amount of theoretical predictions that pointed to more tightly packed structures that should exist.”

The team didn’t stop at 223 GPa, either. After the initial shock, they tracked the structural changes as they cranked up the pressure. At 262 GPa, the phase transition was complete and the gold started to melt. At 322 GPa – almost the pressure at Earth’s centre – the gold was completely liquid, a state scientists haven’t previously observed at this level of pressure.

This is really fascinating for filling out the phase transition diagram for gold, but the findings also have broader implications for manufacturing, the researchers said. For instance, iron has either an fcc or bcc structure depending on its temperature, which is important for steel manufacture – higher-temperature fcc iron can absorb more carbon than cooler bcc.

But the precise mechanisms of the phase transition are still poorly understood. This research shows that gold underwent a phase transition because of both temperature and pressure – which could help in future experiments to try to figure that mechanism out.

And the coexistence of fcc and bcc structures in the gold at 220 GPa under shock conditions suggests that a triple point – where its solid, liquid and gas forms exist in equilibrium – associated with those conditions.

“Many of the theoretical models of gold that are used to understand the high-pressure/high-temperature behaviour did not predict the formation of a body-centred structure,” Briggs said.

“Our results can help theorists improve their models of elements under extreme compression and look toward to using those new models to examine the effects of chemical bonding to aid the development of new materials that can be formed at extreme states.”

The research has been published in Physical Review Letters.

Stunning Image of Supernova Remnant Processed by New Australian Supercomputer
The Moon Stole Something From Deep Inside Earth Eons Ago, and Scientists Can Prove It
Children in Japan Learn to Walk in a Subtly Different Way, Scientists Find
Astronomers Charted The Sun’s Life, And This Is How The Story Ends
This Artificial Synapse Can Run a Million Times Faster Than Ones in The Human Brain