Graphene has already proven itself to be a weird and wonderful material in many different ways, but its properties get even more unusual and exotic when it’s twisted – and two new studies have given scientists a much closer look at this intriguing phenomenon.

When two sheets of graphene are put together at slightly different angles, the resulting material becomes either very effective at conducting electricity, or very effective at blocking it. It’s known as ‘magic-angle’ twisted graphene, and knowing more about how and why this happens could lead to advances in high-temperature superconductors and quantum computing.

Now for the first time, scientists have mapped out a twisted graphene structure in its entirety, and at a very high resolution. They’ve also been able to get ‘graphene twistronics’ working with four layers of graphene as well as just two. 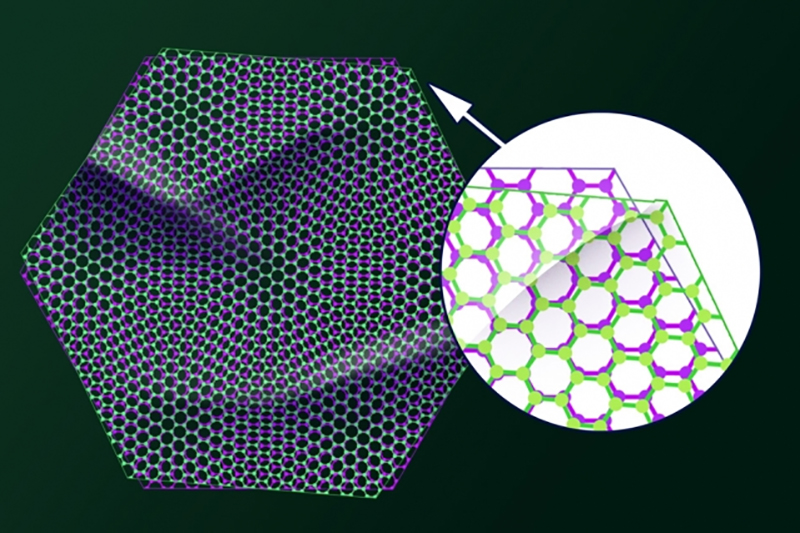 Illustration of two sheets of graphene, stacked together at an angle. (José-Luis Olivares/MIT)

“Once understood, physicists believe these devices could help design and engineer a new generation of high-temperature superconductors, topological devices for quantum information processing, and low-energy technologies.”

To build their high resolution map of layered, twisted graphene, the researchers used a new technique called scanning nano-SQUID (Superconducting Quantum Interference Device), able to sense magnetic fields at the nanoscale. It’s like being able to see an apple and its angle on the horizon – we’re talking about a considerable level of detail here.

Using the readings taken from the scanning nano-SQUID method, the team was able to experiment with a number of different twist angles for two graphene layers, finding that the ‘magic’ twist angle of 1.1 degrees was best for insulation or superconductivity.

What happens when two graphene sheets are layered on top of each other at a slightly misaligned angle is that this angle creates a gradient that induces the current – it’s a bit like two layers of plastic wrap on top of each other. However, the broader that variation, the less dramatic the physics transformation, the scientists observed.

“This is the first time an entire device has been mapped out to see what is the twist angle at a given region in the device,” says physicist Pablo Jarillo-Herrero, from MIT. “And we see that you can have a little bit of variation and still show superconductivity and other exotic physics, but it can’t be too much.”

“We now have characterised how much twist variation you can have, and what is the degradation effect of having too much.”

Knowing those variations, and the effect they have, gives scientists the opportunity to create improved twisted graphene structures in the future. The same goes for knowing how graphene can be stacked up in more layers, with itself or with other materials.

It turns out that the four-layer graphene had the same exotic properties as the two-layer graphene, when twisted at the same 1.1 degree angle. However, with four layers, the scientists could fine tune the insulation using an electric field – something that isn’t possible with only two layers.

Research in this area is only just getting started, but being able to quickly retune a layered sheet of graphene could have all kinds of applications in physics and material science. Get ready to hear a lot more about this in the future.

“It’s still very early in the field,” says Jarillo-Herrero. “For the moment, the physics community is still fascinated just by the phenomena of it.”

“People fantasise about what type of devices we could make but realise it’s still too early and we have so much yet to learn about these systems.”

The research has been published in two papers in Nature, here and here.

What Would Dinosaurs Look Like Today If They Never Went Extinct?
Forests at Risk of Burning an Extra 30 Days a Year Without Climate Action
Ancient Drains Under The Colosseum Reveal The Bones of an Unlikely Gladiator
Scientists Revived Ancient ‘Zombie Viruses’ Frozen For Eons in Siberia
Mummies With Golden Tongues Discovered in Ancient Egyptian Necropolis