All the planets in the Solar System are more or less oriented the same as the Sun, with North and South pointed in the same direction. Not Uranus though. The blue planet’s north-south axis is tilted 98 degrees from the Sun’s orbital plane – it’s practically orbiting lying down.

It’s so weird that there’s no way it could have happened by itself, and now astronomers believe they have figured out the answer. Somewhere, in Uranus’s distant past, it was smacked sideways by a rogue planet roughly twice the mass of Earth.

Actually, a giant impact – or several smaller impacts – have been held as the most plausible reason Uranus is rolling around the Sun like a lazy ball since at least 1966. But we know very little about how and when it occurred, and what other effects it had on the planet.

To look for answers, researchers have now used computer simulations, slamming objects of various sizes into a model of Uranus and observing the results.

“We ran more than 50 different impact scenarios using a high-powered supercomputer to see if we could recreate the conditions that shaped the planet’s evolution,” said physicist Jacob Kegerreis of Durham University in the UK.

“Our findings confirm that the most likely outcome was that the young Uranus was involved in a cataclysmic collision with an object twice the mass of Earth.” 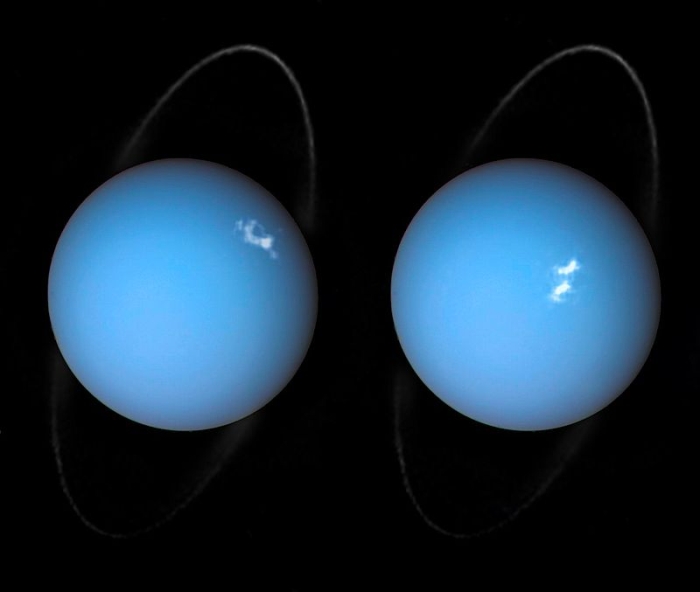 The event, the team found, likely happened around 4 billion years ago, during the early stages of the Solar System. And such a cataclysm can neatly explain several other strange things about Uranus.

For instance, the planet’s delicate equatorial rings, and its system of regular prograde moons. The fact that the moons all orbit in the same direction was previously a sticking point for the one-giant-impact hypothesis, since previous modelling found such an impact would send at least some present moons careening about in the opposite direction.

But if the impact of a rocky, icy body sent clouds of rocky, icy material into orbit around the planet, they could all have ended up going around in the same direction – and creating rings, too. The irregular moons in the planet’s outer orbit, on the other hand, could have been captured later.

Another mystery that has shadowed the impact theory is why such a disruption didn’t send Uranus’s atmosphere blowing out into space. Instead, it’s still nicely wrapped around the planet like an icy blanket.

However, if the blow was a glancing one, it would have been sufficient to tip Uranus on its side while allowing it to retain its atmosphere – and spraying a shower of material into orbit.

And the impact could even have created molten ice and lumps of rock inside the planet. This would explain yet another mystery – why Uranus has such an off-kilter magnetic field, both asymmetrical and tilted 60 degrees off-axis.

The model certainly seems to explain everything very neatly, which is awesome, and not just for understanding our own Solar System.

One of the most common kinds of exoplanet discovered by the Kepler mission is a sort of mini-Neptune – an ice planet like Uranus and Neptune, but smaller in size; Uranus is about 14 times the mass of Earth, and four times the size.

Learning more about Uranus and exactly how it got to be so weird can help understand the evolution of other planets of similar ilk out there in the big wide Universe. They may not have wacky magnetic fields, for example – but they may be just as smelly.

The team’s research has been published in The Astrophysical Journal.