When it comes to finding life outside of Earth, it’s hard to know where to look.

The dark and icy oceans of Enceladus and Europa offer one kind of hypothetical habitat. Meanwhile, the dusty, arid landscape of Mars looks to be almost the opposite – but scientists have just found a clue that gives hope for its dry deserts yet.

In the most Mars-like environment on Earth, Chile’s Atacama Desert, an experimental robotic planetary rover named Zoë has dug strange bacteria out of the soil, some of which is unknown to science but exhibits specialised desert adaptations for Mars-like conditions.

“We have shown that a robotic rover can recover subsurface soil in the most Mars-like desert on Earth,” said biologist Stephen Pointing of Yale-NUS College, Singapore, in a statement.

“This is important because most scientists agree that any life on Mars would have to occur below the surface to escape the harsh surface conditions where high radiation, low temperature, and lack of water make life unlikely.”

We know that, once upon a time, liquid water probably flowed across the surface of Mars. The planet is much drier today, with only water ice on the surface that we have seen, but it may be harbouring liquid water under the surface.

If so, that makes the prospect of life on the Red Planet more likely – but the Atacama Desert points to other possibilities away from water, too.

It’s so dry there that it may not rain for decades or centuries at a time, which makes it incredibly hostile to most life on Earth. But last year, for the first time, microbial life was found thriving there, on the surface.

The surface of Mars, as Pointing pointed out, would be much harsher even than the surface of the Atacama Desert. But when Zoë drilled down to take sample cores to a depth of 80 centimetres, it found subsurface microbes that demonstrate, life might, uh, find a way.

“We saw that with increasing depth, the bacterial community became dominated by bacteria that can thrive in the extremely salty and alkaline soils. They in turn were replaced at depths down to 80 centimetres (2.6 feet) by a single specific group of bacteria that survive by metabolising methane,” Pointing told ScienceAlert.

“This is very exciting because it demonstrates that the subsurface of the Atacama supports highly specialised microbes that can thrive in the salty alkaline Mars-like soils, and the recent measurements of significant methane emission from Mars’ surface suggest methane-utilising bacteria could also thrive there.” 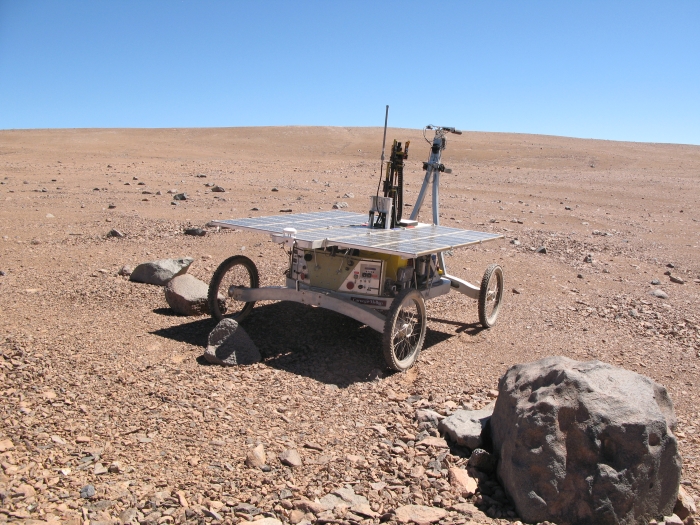 It’s not a sure bet. The team took over 90 sediment samples, both via the robot and by hand, and found that microbial colonisation was patchy. And those areas that had not been colonised by microbes were the most extreme.

Analysis of the sediment showed that it had formed long ago, when water was abundant, but had received no water input for a long time.

Martian soils are probably very similar to this in many places – although perhaps not all. And the team remains hopeful that there are still habitable regions, even if they are few and far between.

“Patchy bacterial colonisation is an indicator of extreme environmental stress, and, in the case of Atacama Desert soils, we can say that life really is holding on right at the limit of habitability,” Pointing said.

“Since conditions on Mars are even more extreme, we can only assume that this patchiness would also be a feature of any Martian bacterial colonisation.”

The bacterium that metabolises methane, he noted, is the most interesting. It was pretty deep below the surface, and has the ability to use a substrate known to be abundant on Mars.

This means that finding Martian bacteria, if there are any, is still going to be a challenge, but the research demonstrates that it’s not entirely impossible.

The next step is to drill even deeper. Martian rovers are expected to drill up to 2 metres (6.6 feet) deep, so the team hopes to take samples at similar depths.

They’re also putting together an idea of where to start drilling on Mars.

“My personal preference would be either fluvial deposits from ancient rivers or in sandstone rocks,” Pointing said.

“Both of these substrates are known to support microbial life and also importantly to preserve biosignatures of colonisation long after extinction of the microorganisms.”

The research has been published in Frontiers in Microbiology.

A Mysterious New Breed of Tropical Cyclone Has Just Been Identified
Giant Asteroid Unleashed a Devastating Martian Megatsunami, Evidence Suggests
The Hunt For Signs of Intelligent Alien Life Just Got a Massive Boost
A Gas Giant Exoplanet Has Been Discovered With Twice The Density of Earth
Earth’s Oxygen Came From an Unexpectedly Deep And Hot Source, Study Suggests