According to the most widely-accepted cosmological models, the first galaxies began to form between 13 and 14 billion years ago. Over the course of the next billion years, the cosmic structures we’ve all come to know emerged.

These include things like galaxy clusters, superclusters, and filaments, but also galactic features like globular clusters, galactic bulges, and Supermassive Black Holes (SMBHs).

However, like living organisms, galaxies have continued to evolve ever since. In fact, over the course of their lifetimes, galaxies accrete and eject mass all the time.

In a recent study, an international team of astronomers calculated the rate of inflow and outflow of material for the Milky Way. Then the good folks at astrobites gave it a good breakdown and showed just how relevant it is to our understanding of galactic formation and evolution.

The study was led by ESA astronomer Andrew J. Fox and included members from the Space Telescope Science Institute‘s (STScI) The Milky Way Halo Research Group, and multiple universities. Based on previous studies, they examined the rate at which gas flows in and out of the Milky Way from surrounding high-velocity clouds (HVC).

In accordance with this model, the most massive stars in a galaxy produce stellar winds that drive material out of the galaxy disk. When they go supernova near the end of their lifespans, they similarly drive most of their material out. This material then infalls back into the disk over time, providing material for new stars to form.

“These processes are collectively known as ‘stellar feedback’, and they are responsible for pushing gas back out of the Milky Way,” said Foley. “In other words, the Milky Way is not an isolated lake of material; it is a reservoir that is constantly gaining and losing gas due to gravity and stellar feedback.”

In addition, recent studies have shown that star formation may be closely related to the size of the Supermassive Black Hole (SMBH) at a galaxy’s core. Basically, SMBHs put out a tremendous amount of energy that can heat gas and dust surrounding the core, which prevents it from clumping effectively and undergoing gravitational collapse to form new stars. 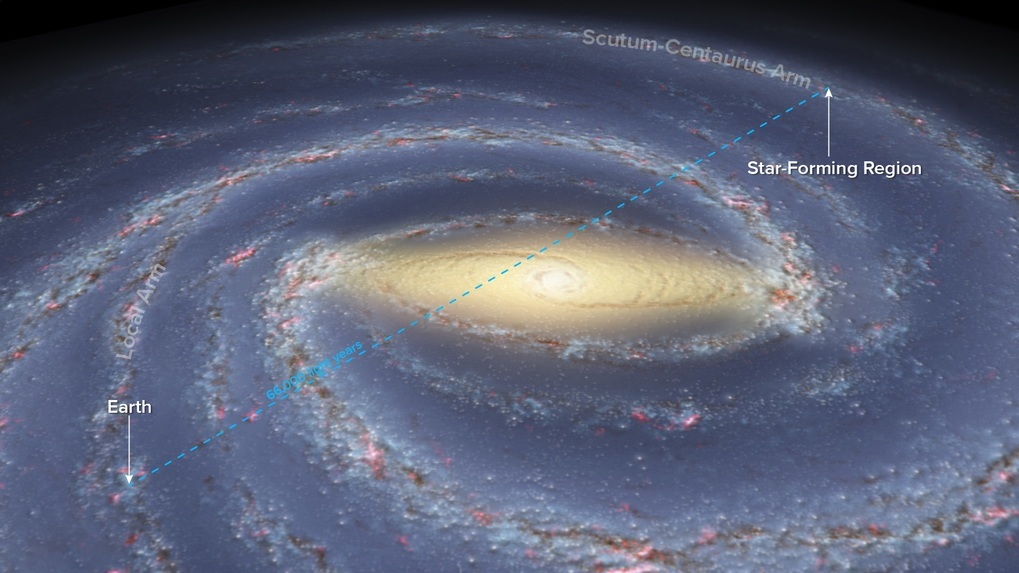 As such, the rate at which material flows in and out of a galaxy is key to determining the rate of star formation. To calculate the rate at which this happens for the Milky Way, Fox and his colleagues consulted data from multiple sources. As Fox told Universe Today via email:

“We mined the archive. NASA and ESA maintain well-curated archives of all Hubble Space Telescope data, and we went through all the observations of background quasars taken with the Cosmic Origins Spectrograph (COS), a sensitive spectrograph on Hubble that can be used to analyze the ultraviolet light from distant sources. We found 270 such quasars. First, we used these observations to make a catalog of fast-moving gas clouds known as high-velocity clouds (HVCs). Then we devised a method for splitting the HVCs into inflowing and outflowing populations, by making use of the Doppler shift.”

In addition, a recent study showed that the Milky Way experienced a dormant period roughly 7 billion years ago – which lasted for about 2 billion years. This was the result of shock waves that caused interstellar gas clouds to become heated, which temporarily caused the flow of cold gas into our galaxy to stop. Over time, the gas cooled and began flowing in again, triggering a second round of star formation.

After looking at all the data, Fox and his colleagues were able to place constraints on the rate of inflow and outflow for this galaxy of ours: 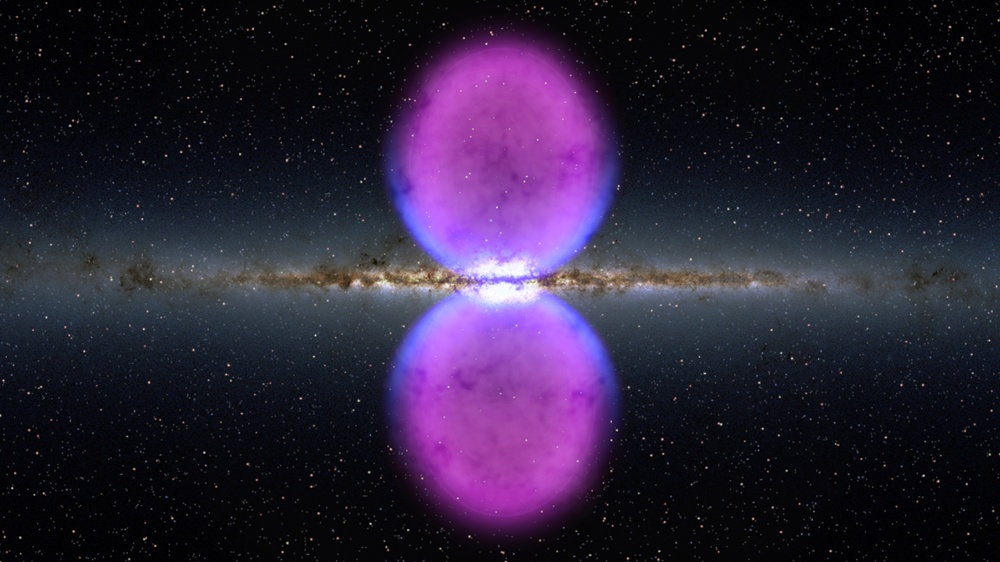 However, as Foley indicated, HVCs are believed to live for periods of only about 100 million years or so. As a result, this net inflow cannot be expected to last indefinitely.

“Finally, they ignore HVCs that are known to reside in structures (such as the Fermi Bubbles) that don’t trace the inflowing or outflowing gas,” he adds.

Since 2010, astronomers have been aware of the mysterious structures emerging from the center of our galaxy known as Fermi Bubbles. These bubble-like structures extend for thousands of light-years and are thought to be the result of SMBH’s consuming interstellar gas and belching out gamma rays.

However, in the meantime, the results provide new insight into how galaxies form and evolve. It also bolsters the new case made for “cold flow accretion”, a theory originally proposed by Prof. Avishai Dekel and colleagues from The Hebrew University of Jerusalem’s Racah Institute of Physics to explain how galaxies accrete gas from surrounding space during their formation.

“These results show that galaxies like the Milky Way do not evolve in a steady state,” Fox summarized.

“Instead they accrete and lose gas episodically. It’s a boom and bust cycle: when gas comes in, more stars can be formed, but if too much gas comes in, it can trigger a starburst so intense that it blows away all the remaining gas, shutting off the star formation. Thus the balance between inflow and outflow regulates how much star formation occurs. Our new results help to illuminate this process.”

Another interesting takeaway from this study is the fact that what applies to our Milky Way also applies to star systems. For instance, our Solar System is also subject to the inflow and outflow of material over time. Objects like ‘Oumuamua and the more recent 2I/Borisov confirm that asteroids and comets are kicked out of star systems and scooped up by others regularly.

But what about gas and dust? Is our Solar System and (by extension) planet Earth losing or gaining weight over time? And what could this mean for the future of our system and home planet? For example, astrophysicist and author Brian Koberlein addressed the latter issue in 2015 on his website. Using the then-recent Gemini meteor shower as an example, he wrote:

“In fact from satellite observations of meteor trails it’s estimated that about 100 – 300 metric tons (tonnes) of material strikes Earth every day. That adds up to about 30,000 to 100,000 tonnes per year. That might seem like a lot, but over a million years that would only amount to less than a billionth of a percent of Earth’s total mass.”

However, as he goes on to explain, Earth also loses mass on a regular basis through a number of processes. These include radioactive decay of material in the Earth’s crust, which leads to energy and subatomic particles (alpha, beta and gamma-rays) leaving our planet.

A second is atmospheric loss, where gases like hydrogen and helium will be lost to space. Together, these add up to a loss of about 110,000 tonnes per year. 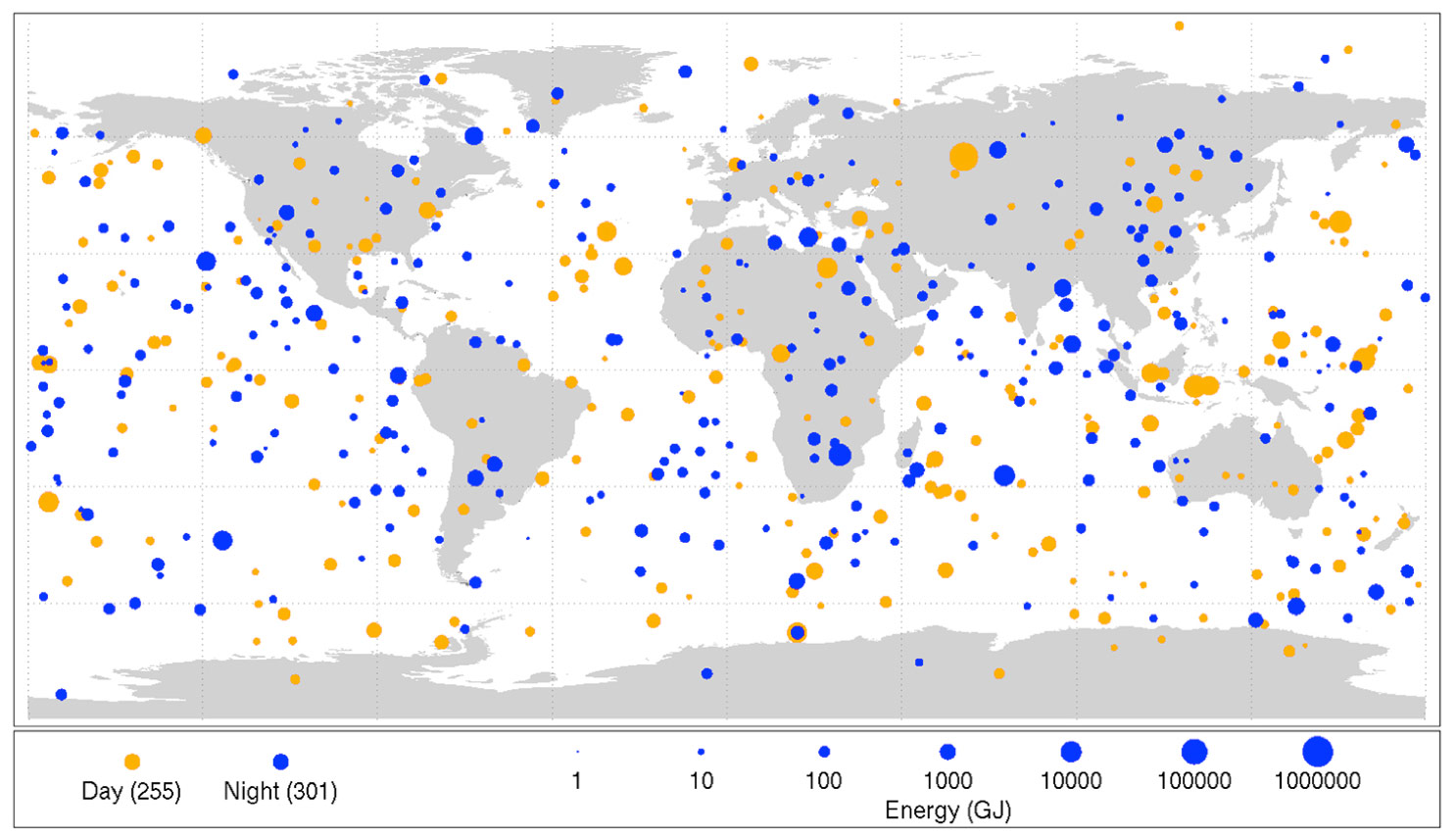 On the surface, this would seem like a net loss of about 10,000 or more tonnes annually. What’s more, microbiologist/science communicator Chris Smith and Cambridge physicist Dave Ansell estimated in 2012 that the Earth gains 40,000 tonnes of dust a year from space, while it loses 90,000 a year through atmospheric and other processes.

So it may be possible that Earth is getting lighter at a rate of 10,000 to 50,000 tonnes a year. However, the rate at which material is being added is not well constrained at this point, so it is possible that we might be breaking even (though the possibility that Earth is gaining mass seems unlikely).

As for our Solar System, the situation is similar. One the one hand, interstellar gas and dust flows in all the time.

On the other hand, our Sun – which accounts for 99.86 percent of the Solar System’s mass – is also shedding mass over time. Using data gathered by NASA’s MESSENGER probe, a team of NASA and MIT researchers concluded that the Sun is losing mass due to solar wind and interior processes. According to Ask an Astronomer, this is happening at a rate of 1.3245 x 10^15 tonnes a year even though the Sun is expanding simultaneously.

But as it loses mass, its gravitational influence on Earth and the other planets will diminish. However, by the time our Sun reaches the end of its main sequence, it will expand considerably and could very well swallow Mercury, Venus, Earth and even Mars completely.

So while our galaxy may be gaining mass for the foreseeable future, it looks like our Sun and Earth itself are slowly losing mass. This should not be seen as bad news, but it does have implications in the long run.

In the meantime, it’s kind of encouraging to know that even the oldest and most massive objects in the Universe are subject to change like living creatures.

Whether we’re talking about planets, stars, or galaxies, they are born, they live, and they die. And in between, they can be trusted to put on or lose a few pounds. The circle of life, played out on the cosmic scale!