So you can understand why the detection of haematite on the Moon has scientists baffled, since haematite is an oxidised form of iron that, here on Earth, requires the presence of both air and water to form.

Especially since the Moon is constantly bombarded with a stream of hydrogen from the solar wind, a reducing agent that ‘donates’ its electrons to the materials it interacts with. Oxidisation occurs due to a loss of electrons – so even if all of the right elements were present for oxidisation to occur, the solar wind should cancel it out.

“It’s very puzzling,” said planetary scientist Shuai Li of the University of Hawaii at Manoa. “The Moon is a terrible environment for haematite to form in.” 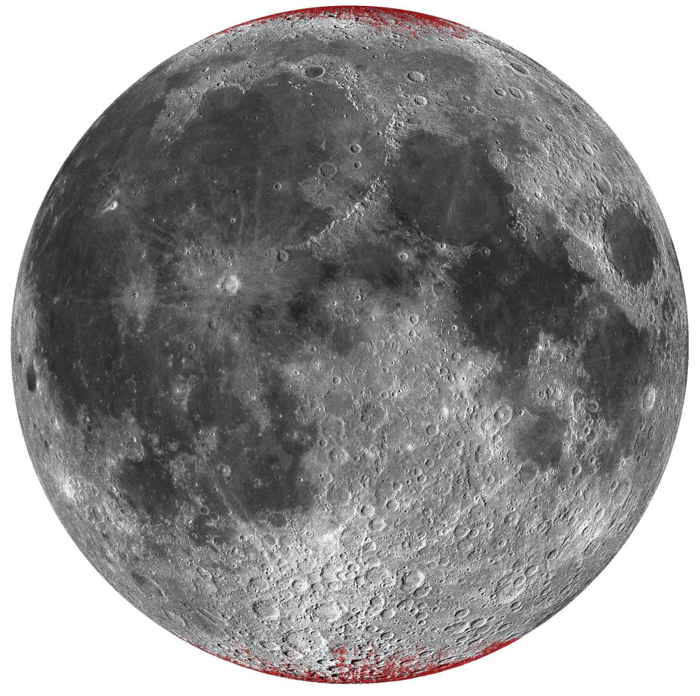 Enhanced map of the haematite at the lunar north pole. (Shuai Li)

In this way, Li and his colleagues identified ice deposits at high latitudes around the lunar poles in 2018. But, when he was examining the data, Li noticed something strange.

“When I examined the M3 data at the polar regions, I found some spectral features and patterns are different from those we see at the lower latitudes or the Apollo samples,” Li said.

“I was curious whether it is possible that there are water-rock reactions on the Moon. After months of investigation, I figured out I was seeing the signature of haematite.”

Which raised a big question: how the heck did it get there? Well, a big hint could lie in how the haematite is distributed. It corresponds pretty strongly with traces of water previously identified and linked to impacts. Scientists believe that water ice could be mixed in with the lunar regolith, and excavated and melted during impact events.

The haematite is also mostly found on the side of the Moon that is always facing Earth. That, according to the researchers, is really interesting.

“More hematite on the lunar nearside suggested that it may be related to Earth,” Li said.

“This reminded me of a discovery by the Japanese Kaguya mission that oxygen from Earth’s upper atmosphere can be blown to the lunar surface by solar wind when the Moon is in Earth’s magnetotail. So, Earth’s atmospheric oxygen could be the major oxidant to produce haematite.”

During the full Moon, our satellite is in Earth’s magnetotail, the trailing region of the magnetosphere away from the Sun. At these times, over 99 percent of the solar wind is blocked from reaching the Moon, which means that pesky hydrogen reducing agent isn’t getting all up in the oxidation process.

Combine these three ingredients – minute amounts of molecular water, minute amounts of oxygen, and a brief window of time each month in which rust can form freely – and, over a few billion years, you can get haematite on the Moon.

That doesn’t mean the mystery is completely solved, however.

“Interestingly, haematite is not absolutely absent from the far-side of the Moon where Earth’s oxygen may have never reached, although much fewer exposures were seen,” Li said.

“The tiny amount of water observed at lunar high latitudes may have been substantially involved in the haematite formation process on the lunar far-side, which has important implications for interpreting the observed haematite on some water poor S-type asteroids.”

Getting our hands on the mineral itself would be really interesting. It’s possible that haematite deposits over a range of ages could still retain oxygen isotopes from different ages in Earth’s history, dating back billions of years. This could be really useful for understanding our planet’s atmospheric evolution.

And, of course, it would be deeply enlightening for understanding the Moon’s history, too.

“This discovery will reshape our knowledge about the Moon’s polar regions,” Li said. “Earth may have played an important role on the evolution of the Moon’s surface.”