Night and day on Saturn, the Solar System’s show-off, is utterly, devastatingly gorgeous. Sure, it doesn’t have the glittering lights of human habitation, like Earth does; what it does have is its spectacular rings.

On Saturn’s night side, its shadow falls across part of its rings, dividing them sharply into night and day with a line called the terminator.

This is illustrated in the image above, a mosaic of four photos taken by the space probe Cassini on 5 November 2006, just a couple of years after it arrived at Saturn for its 13-year observation mission.

In the top of the image, the rings are in shadow; the bottom in sunlight, ice particles reflecting the light brightly.

Those rings follow the same orbital direction as Saturn, rotating about the planet’s equator. But the rotational periods vary across the rings. Saturn completes one rotation every 10 hours and 33 minutes.

And exactly how much sunlight hits the rings varies according to Saturn’s 7.5-year seasons.

At equinox, which occurs roughly once every 15 years, the rings are directly edge-on to the Sun, which means they’re getting very little direct light, and Saturn’s shadow on the rings is at its longest. This lasts approximately four days. 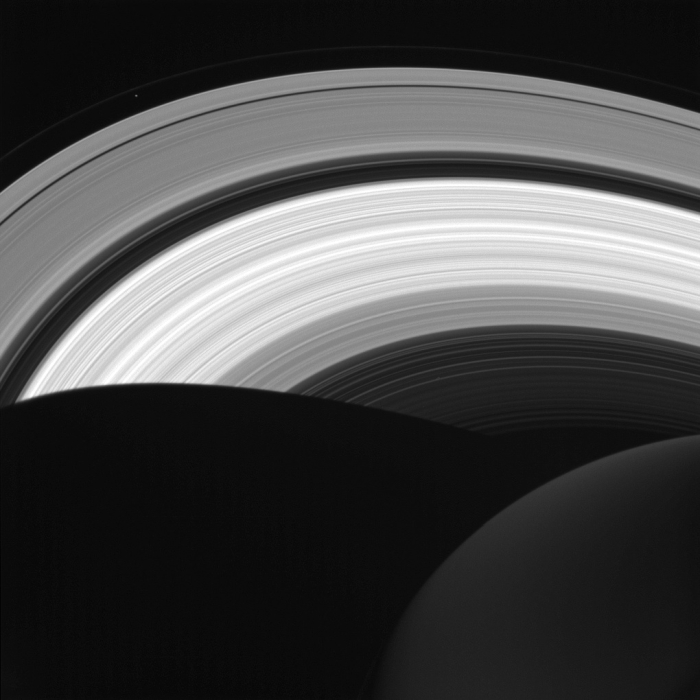 This means Saturn’s night side is at its darkest during the equinox, since there’s little or no ringshine – where sunlight bounces off the reflective rings and faintly illuminates the planet’s dark side.

You can see most of Saturn lit up only by ringshine in the image below (only that tiny crescent on the bottom left is sunlit, the rest is all ringshine illuminated).

At the solstices – again once every 15 years or so, directly between the equinoxes – Saturn is at maximum axial tilt of 26.75 degrees towards the Sun, its shadow short and not reaching even to the outer edge of the A ring, so the rings are getting hit with the most light in Saturn’s year.

This can be seen in the image below, taken in May 2004, two years after the solstice.

The ringshine during solstice therefore makes Saturn’s night side brighter on either the northern or southern hemisphere, depending which is experiencing the summer solstice (the winter hemisphere will still get a bit of ringshine, but not as much.)

Solstice is also the best time to view Saturn if you want to check out its rings, since that’s when they’re at their best viewing angle.

The most recent solstice was in May 2017, but the rings are still at a decent tilt (and will be for a few years yet) if you want to get out there with your telescope!

The next equinox, when the rings will be edge-on, will take place in early May 2025. The following solstice will be in April 2032.

If you are keen to try your hand at Saturn photography – and it is very photogenic – you could try tracking the changes in the planet’s tilt as the seasons roll on.

We May Finally Have Evidence of The First Stars in The Universe
Every Life Form on Earth Uses The Same Chemical For Energy. This Could Explain Why.
After 50 Years, Scientists Finally Figure Out How Bacteria Actually Move
Narwhals Are So Weird, Scientists Used Chaos Theory to Explain Their Behavior
Scientists Win Physics Nobel Prize For Proving Einstein Wrong