We may have discovered thousands of exoplanets, but few have astronomers as excited as a newly discovered system located just 73 light-years away.

It could not only tell us about planet formation, it could lead us to the discovery of a habitable world.

Around an unusually quiet red dwarf 73 light-years away, the planet-hunting TESS satellite has identified three planets – one rocky world just a little larger than Earth, and two sub-Neptunes about twice Earth’s size.

And they seem to be linked in a chain of resonance, interacting gravitationally to produce a pattern in their orbital periods.

“TOI-270 is a true Disneyland for exoplanet science, and one of the prime systems TESS was set out to discover,” said astrophysicist Maximilian Günther of MIT’s Kavli Institute for Astrophysics and Space Research.

“You can really do all the things you want to do in exoplanet science, with this system.”

To be clear, none of the three planets are likely to be habitable themselves. TOI-270b, a rocky planet about 1.25 times the size of Earth, is the closest to the star, whipping around in a complete orbit once every 3.4 days.

Although the star is a lot cooler than the Sun, and just 40 percent of its size, that is still too close for liquid water on the surface, one of the primary metrics for determining habitability.

Of the two sub-Neptunes – one 2.42 times the size of Earth, the other 2.13 times the size – the larger one has an orbit of 5.7 days; this is also too close to the star for habitability.

The smaller sub-Neptune has an 11.4-day orbit, which means that its outer atmosphere could be habitable temperature-wise; but it likely has a very thick atmosphere that creates a greenhouse effect, leaving the surface far too hot for survivability. (Sounds a bit like Venus.) 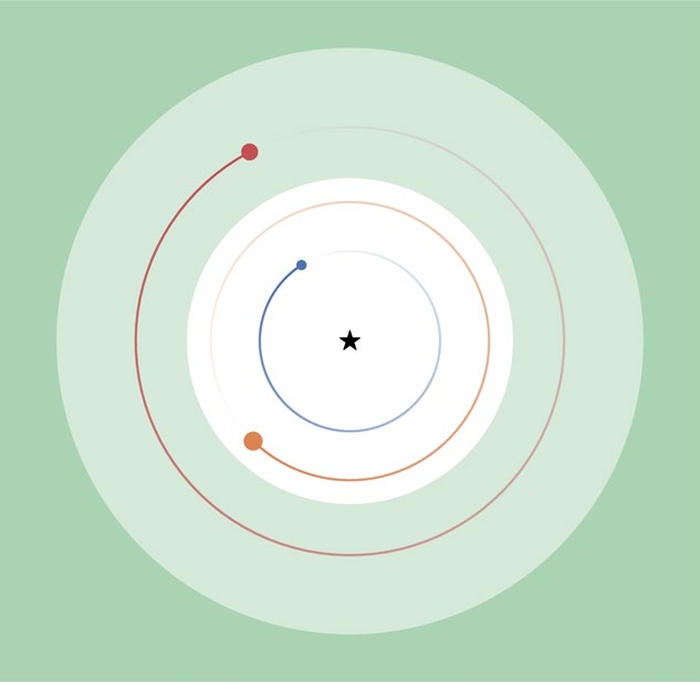 A diagram of the planetary orbits, with the habitable zone represented in dark green and the extremophile habitable zone in light green. (Günther et al., Nature Astronomy, 2019)

At that proximity, it’s also likely that all three planets are tidally locked, meaning the same side always faces the star, which doesn’t make ideal conditions for life.

Let’s start with the star itself. Most red dwarfs are turbulent, spitting out flares – but TOI-270 is older. And because it’s nearby, it’s also bright.

Also, because its planets pass between us and the star when they orbit, we may be able to learn about their atmospheres by studying changes in the star’s light.

This could help us learn more about how different planets form, and why some are rocky and small, and some are huge and gaseous.

We can’t do this based on the planets in our own Solar System, because it doesn’t have any sub-Neptunes – known as the “missing link” between rocky planets and gas giants.

“We’ve found very few planets like this in the habitable zone, and many fewer around a quiet star, so this is rare,” said planetary astrophysicist Stephen Kane of the University of California Riverside.

“For TOI-270, these planets line up like pearls on a string,” Günther said.

“That’s a very interesting thing, because it lets us study their dynamical behaviour. And you can almost expect, if there are more planets, the next one would be somewhere further out, at another integer ratio.”

In other words, it could tell astronomers where to look for more distant planets in the system – and this is where it gets really interesting. The habitable zone extends farther back from the star, and there may be more planets therein.

And, the astronomers noted, although TOI-270d is unlikely to be habitable itself, it may have exomoons that are.

It really is a tremendously exciting system for future research opportunities.

“There are a lot of little pieces of the puzzle that we can solve with this system,” Günther said. “It is an exceptional laboratory for not one, but many reasons – it really ticks all the boxes.”

This Artificial Synapse Can Run a Million Times Faster Than Ones in The Human Brain
Children in Japan Learn to Walk in a Subtly Different Way, Scientists Find
Minor Google Meltdown Exposes The World’s Utter Reliance on a Single Tech Company
The Moon Stole Something From Deep Inside Earth Eons Ago, and Scientists Can Prove It
Scientists Discover ‘Silent’ Stingrays Actually Make Weird Clicking Noises