Neowise is the first bright comet to be visible with the naked eye from the Northern Hemisphere since the mid-1990s.

Another thing that makes this comet interesting is that it has a relatively long orbital period, meaning it was only discovered a few months ago.

Halley’s comet, for example, takes about 75 years to return to the same position near Earth, meaning everybody has the opportunity to see it potentially twice during their lifetime.

Neowise has an orbit of almost 6,800 years, meaning that the last generation of people to see it would have lived during the fifth millennium BCE.

This was a time well before the written word, when the global human population was about 40 million people.

The cause of this really long return time is the elliptical shape of Neowise’s orbit around the Sun.

In the early 17th century, astronomer Johannes Kepler derived his laws of planetary motion, which apply to any object orbiting in space, including comets.

These laws state that objects on highly elliptical orbits will move fast near the barycenter – the centre of mass of two or more bodies that orbit one another – of the path and much slower further away.

So comet Neowise will only be seen for a few weeks near Earth while it is near perihelion (its closest approach to the Sun).

It will then spend thousands of years moving slowly near the other end of its orbit. It’s aphelion (farthest point) is estimated at 630 astronomical units (AU), with one AU being the distance between the Earth and the Sun.

To put that in perspective, the Voyager 1 spacecraft is the farthest human crafted object from Earth and it is currently at a mere 150 AU.

The dwarf planet Pluto also has an elliptical orbit, which ranges from just 30 AU at perihelion to 49 AU at aphelion.

Comets often have two tails, and comet Neowise is no exception. One is made of electrically neutral material such as water ice and dust particles forming the distinct white fuzzy shape around the comet and its tail. As the Sun heats up the comet, these tiny particles are released and create a shining tail behind it.

The second tail is made from a plasma – an electrically charged cloud of gas. This shines by fluorescence, the same process that causes aurora on Earth, and is used in neon lighting.

Colours can be green or blue depending on the kind of charged gas escaping from the comet. As the plasma flows away from the comet it is guided by the Sun’s magnetic field and the solar wind.

This causes separation between the two tails – one being driven by the comet’s direction, and the other by the Sun’s magnetic field.

How to spot Neowise

Even though Neowise is very distant from Earth, with its closest approach on July 22 being almost as far away as Mars, it is still visible in the night sky to the naked eye – hovering near the northern horizon.

The comet is estimated to currently be at magnitude 1.4 – a measure of brightness astronomers use, with smaller numbers denoting brighter objects. Venus, which is the brightest planetary object in the sky, is about -4. Comet Hale-Bopp reached a maximum magnitude of 0 in 1997 due to its exceptionally large size, while comet McNaught was visible from the Southern Hemisphere with a maximum magnitude of -5.5.

Neowise may get brighter over the next week, but which level of brightness it reaches will depend primarily on how much material erupts from its surface rather than the distance from the Earth.

This material consists of highly reflective water ice particles from the nucleus of the comet erupting outwards, shining when they catch the sunlight. 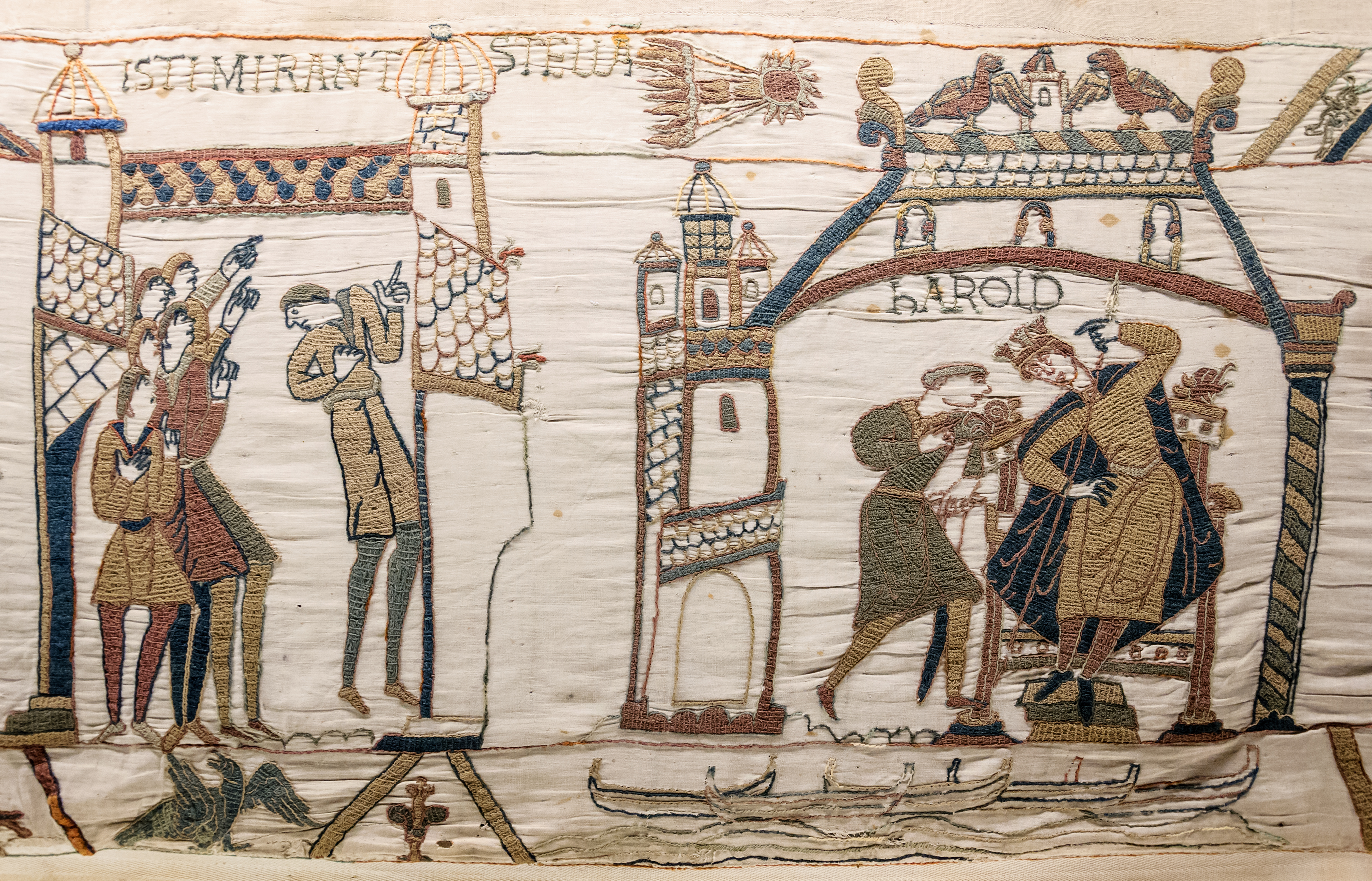 The history of cometary observations is extensive, making vital contributions to the development of modern astronomy, and has had quite an impact on human history.

Halley’s comet, for example, was famously featured on the Bayeux Tapestry (above) as it made an appearance in the months leading up to the Norman conquest of England in 1066 (magnitude estimated at about 1).

In the late medieval period, comets helped astronomers to fundamentally refine their understanding of the Solar System. An essential component of the then standard Ptolemaic geocentric model of the Solar System, which dominated astronomy for 15 centuries, mandated that the planets were fixed to a series of concentric transparent celestial spheres, with the Earth at the centre.

Even after the Copernican revolution, which put the Sun at the centre of the Solar System, the celestial spheres were retained as a concept. However, in the late 1500s several astronomers, including Tycho Brahe, noted that comets with their highly elliptical orbits seemed to pass through these spheres without hindrance.

These observations contributed to the eventual abandonment of the Ptolemaic system entirely, and the subsequent explanation of planetary orbits by Johannes Kepler, which is still in use today.

Important observations during the space age include the first close encounter between a comet and spacecraft. Halley’s comet was imaged from a distance of just a few hundred kilometres by the Giotto spacecraft. And in 2014 the Rosetta spacecraft became the first to orbit a comet, and deploy a lander on the surface, sending back remarkable images to Earth.

The sobering role of comets in shaping planetary evolution was also demonstrated spectacularly in 1994 when comet Shoemaker-Levy-9 collided with Jupiter.

With the constant increase of light pollution in the night sky, the observation of comets with the naked eye is becoming much rarer.

For now, though, Neowise presents a fantastic opportunity for millions of people to see a night sky phenomenon which typically only presents itself perhaps once in a decade or more. Enjoy the view!

What Exactly Does It Mean to Die of ‘Old Age’?
Astronomers Think They Know The Reason For Uranus’s Kooky Off-Kilter Axis
It Turns Out There Is Such a Thing as Good Gossip, According to New Research
Scientists Win Physics Nobel Prize For Proving Einstein Wrong
Watch A Great White Become an Orca’s Lunch in World-First Footage