Humans are about to make history by sending a little piece of a Martian rock back to the surface of Mars for the first time ever.

The meteorite fragment Sayh al Uhaymir 008 (or SaU 008) will hitch a ride on the 2020 NASA Perseverance rover mission on Thursday – some 600,000 years after it left the Red Planet, and around 1,000 years after arriving on Earth.

Perseverance is going to use SaU 008 to calibrate its sensitive scanners and instruments once it lands, treating it as a reference point for the other rocks and materials that it’s going to come across in its journey across the Martian surface.

There’s still plenty that we don’t know about the geological make-up of Mars, and a rock fragment that we know originates from the planet – and that has already been extensively analysed – is going to be a helpful comparison point.

“This little rock’s got quite a life story,” Caroline Smith, the Head of Earth Sciences Collections and Principal Curator of Meteorites at the Natural History Museum in the UK, told the BBC.

The meteorite that SaU 008 comes from was found in Oman in 1999, and the SaU 008 fragment has been part of the Natural History Museum collection since 2000.

The tiny bubbles of gas trapped inside the rock are an exact match to the atmospheric conditions of Mars, which is how we know its origin.

A small slice of SaU 008 is going to be mounted onto the SHERLOC (Scanning Habitable Environments with Raman and Luminescence for Organics and Chemicals) spectrometer, carried by Perseverance, which will use a laser to analyse the chemical and organic composition of Martian rocks.

Having a piece of original Mars meteorite on hand should make this study more accurate and reliable, and SHERLOC is taking along nine other different materials to test them in the atmosphere of the Red Planet – including a material that could be used in future spacesuits.

“The SHERLOC instrument is a valuable opportunity to prepare for human spaceflight as well as to perform fundamental scientific investigations of the Martian surface,” says SHERLOC co-investigator and curator of extraterrestrial materials Marc Fries, from the Johnson Space Center.

“It gives us a convenient way to test material that will keep future astronauts safe when they get to Mars.” 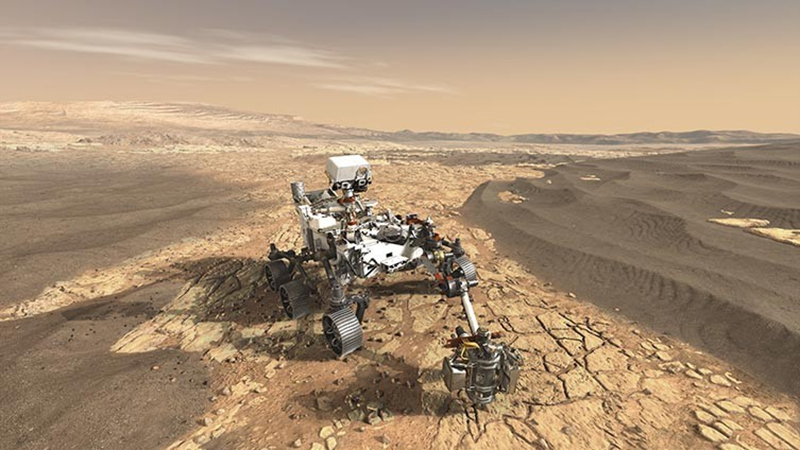 An artist’s concept of the Mars 2020 Perseverance rover. (NASA/JPL-Caltech)

Of course, there are other ways NASA could calibrate those instruments. But, as a paper presented at the 50th Lunar and Planetary Science Conference last year explained, the homecoming of part of SaU 008 also offers “unique education and public outreach purposes”.

Both NASA and SpaceX have a history of using unique and headline-grabbing items to help them in their missions – whether it’s a sparkly purple dinosaur used as a zero-gravity indicator, or a Tesla roadster as a test payload.

So, sending a Martian rock back to its home planet may be somewhat of a publicity stunt, but it’s a pretty cool one, with a useful purpose.

While a meteorite chunk has previously been blasted back into the orbit of Mars, this is going to be the first time a fragment like this will have been returned to the actual surface. It’ll be used around Perseverance’s landing site, the Jezero crater.

The 49-kilometre (30-mile) bowl may have once held a lake, and one of the jobs that Perseverance has is to look for any lingering traces of life. Any samples of interest are going to be packaged up and left for future missions to recover.

Material with signs of Martian life could eventually arrive back in 10-15 years, and if Perseverance does find something of note, then the homecoming of the small fragment of SaU 008 will be partially responsible.

“The piece of rock we are sending was specifically chosen because it is the right material in terms of chemistry, but also it is a very tough rock,” Smith told the Guardian. “Some of the Martian meteorites we have are very fragile. This meteorite is as tough as old boots.”

The Perseverance mission, with a bit of SaU 008 on board, is scheduled to launch on 30 July. You can watch the whole thing live below.

Watch A Great White Become an Orca’s Lunch in World-First Footage
Every Life Form on Earth Uses The Same Chemical For Energy. This Could Explain Why.
The Pacific Is Destined to Vanish as Earth’s Continents Meld Into a New Supercontinent
There’s a New Quantum Computing Record: Control of a 6-Qubit Processor in Silicon
Pythons Can Swallow Almost Anything. A New Study Shows How