In a death-defying maneuver for the spacecraft, NASA’s Juno has completed an unprecedented and unplanned engine burn. The purpose? To save the spacecraft’s ‘life’, or at least the rest of its mission to Jupiter.

Jupiter casts a deep, dark shadow. Dark enough, in fact, to effectively kill Juno if it flies through it.

Rather than let the spacecraft spend 12 battery-draining hours in Jupiter’s shadow, and then attempt a risky resuscitation on the other side, NASA took another course of action: a 10.5 hour burn of Juno’s reaction thrusters that will steer it clear of Jupiter’s life-draining shadow.

10.5 hours is a very long burn, and it used up about 73 kg (160 lbs) of fuel. But without doing so, Juno would have been plunged into Jupiter’s deep dark shadow on November 3, its next close approach to the gas giant. It would’ve spent 12 hours in the shadow, long enough to completely drain its batteries.

The spacecraft’s temperature would’ve plummeted, and with no power in its batteries, it likely would’ve succumbed to the cold, never to awaken again.

Luckily, the burn was successful, and according to Juno’s Principal Investigator, Scott Bolton, it was an “amazingly creative solution” to the problem of Jupiter’s shadow.

“With the success of this burn, we are on track to jump the shadow on November 3,” said Scott Bolton, Juno principal investigator at the Southwest Research Institute in San Antonio.

“Jumping over the shadow was an amazingly creative solution to what seemed like a fatal geometry. Eclipses are generally not friends of solar-powered spacecraft. Now instead of worrying about freezing to death, I am looking forward to the next science discovery that Jupiter has in store for Juno.”

This shadow-evading burn highlights how tricky Juno’s orbit is overall.

Juno has been at Jupiter since July 2016. Since that time, it’s performed a series of long, elliptical orbits. 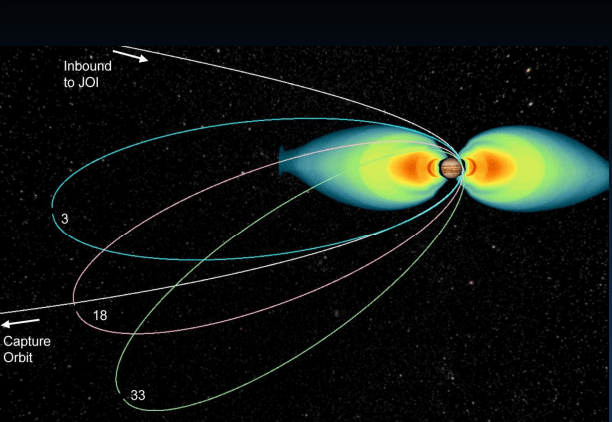 But it can only spend a brief amount of time close to Jupiter during each orbit. The radiation is so intense that each close pass damages the spacecrafts electronics and instruments a little bit, shortening their life-span. Eventually, even though they’re housed in a protective titanium vault, the instruments will fail, and the mission will end.

But a 12-hour period spent in Jupiter’s shadow would have ended the mission prematurely, with all of its instruments intact and operating. That premature end would’ve deprived us of a lot of knowledge, and awesome JunoCam images.

So Juno, adept at avoiding hazards, was instructed to avoid the darkness. It took resources to do that, though, in the form of the reaction control system’s hydrazine propellant.

Juno was never designed to travel through the dark. In fact, during its entire mission, it spent only 10 minutes in the dark, when it travelled through Earth’s shadow during a fly-by early in the mission.

That’s because rather than an RTG (radioisotope thermoelectric generator) power source common in other missions so far from the Sun, Juno relies on solar power for its operations. Juno is the first mission to travel this far from the Sun with solar power.

The spacecraft has three solar arrays that produced up to 490 watts at the beginning of the mission. But over time, the efficiency of solar arrays is lowered, so that by the end of the mission they’ll produce only about 420 watts.

But even at peak efficiency, Juno’s solar power system simply won’t help the spacecraft survive 12 hours of darkness. It lacks the battery capacity. And batteries are heavy; you don’t launch a spacecraft with extra batteries, “just in case”.

This isn’t the first wrinkle in managing Juno’s orbit. In fact, this shadow-evading maneuver is necessary because of another change in Juno’s orbit.

When it first entered orbit around Jupiter, it took 53 days to complete one orbit. The plan was to perform a thruster burn, and change the orbit to only 14 days. But when engineers suspected a fuel-delivery problem, they maintained the 53-day orbit.

The shorter 14 day orbit would have meant less time between science flybys. Juno will still complete all of its orbits, but because Juno couldn’t enter its 14 day orbit, the science is taking longer. So while the initial mission plan never had to contend with the upcoming 12 hours of shadow, the revised plan did. That’s what necessitated the 10.5 hour burn.

Ed Hirst is Juno project manager at NASA’s Jet Propulsion Laboratory in Pasadena, California. In a press release, He praised both the skill of the team operating it, and the versatility of the spacecraft itself.

“Pre-launch mission planning did not anticipate a lengthy eclipse that would plunge our solar-powered spacecraft into darkness,” said Hirst.

“That we could plan and execute the necessary maneuver while operating in Jupiter’s orbit is a testament to the ingenuity and skill of our team, along with the extraordinary capability and versatility of our spacecraft.”

The Juno mission to Jupiter is managed by NASA’s Jet Propulsion Laboratory. It was launched on 5 August 2011, and entered Jupiter orbit on 5 July 2016. The mission is due to end in July 2021, when the spacecraft will plunge to its destruction in Jupiter’s atmosphere.