As the Cassini probe plunged into Saturn, it measured the gravitational pull of the rocks making up its iconic rings – and those readings tell us the rings might be a lot younger than we previously thought.

In fact, they might have formed around the same time dinosaurs were walking the Earth, with scientists estimating that the rings formed less than 100 million years ago, and maybe as little as 10 million years ago.

With Saturn clocking in at around 4.5 billion years old, it means the giant planet may have been without its distinctive halo for much of its life. Even from beyond the grave, Cassini is still teaching us more about our Solar System.

“Only by getting so close to Saturn in Cassini’s final orbits were we able to gather the measurements to make the new discoveries,” says one of the researchers, Luciano Iess from the Sapienza University of Rome in Italy.

Astronomers have long suspected that Saturn’s rings might not be that old, but thanks to Cassini’s hyper-sensitive gravity measurements, there’s now some solid evidence.

The gravitational pull of the rings indicates their mass, which in turn indicates how old they are. The more time these icy rocks spend out in space, the heavier they get, contaminated by passing space debris.

In case you were wondering, the mass of the rings reaches around 15 quintillion kilograms (about 16.5 quadrillion tons), roughly 5,000 times less mass than our own Moon.

What we still don’t know for sure is how the rings formed. Scientists think a passing comet might have wandered too close to Saturn and been ripped up by its huge gravitational pull, but that’s still just a hypothesis for now.

The same measurements captured by Cassini also revealed something else about Saturn – the layers of its atmosphere rotate around the planet at different speeds, until you get at least 9,000 kilometres (5,590 miles) in. 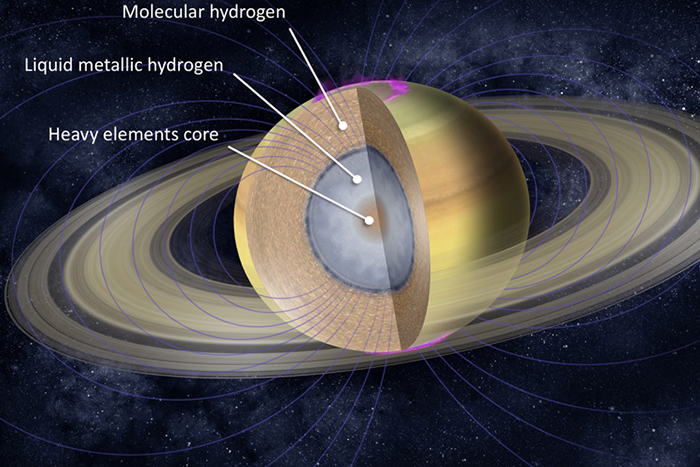 It’s a phenomena we’ve seen on Jupiter too, but the difference is the layers on Jupiter start synchronising and rotating together much higher in the atmosphere.

“Perhaps a big collision formed the rings around the age of the dinosaurs, but for me, the real surprise was the interior structure,” Iess told Ryan F. Mandelbaum at Gizmodo.

Saturn, like every other planet, is constantly changing. We’ve just discovered its rings may only be 100 million years old, but they might only have another 100 million years left – because of a process called ‘ring rain’ which drags ice particles into the planet.

Gravity readings Cassini took from Saturn (rather than its rings) suggest the planet has a mass around 15-18 times that of Earth. And the probe isn’t finished there – NASA is promising that we’ve got more findings from Cassini data on the way.

“These measurements were only possible because Cassini flew so close to the surface in its final hours,” says one of the team, Burkhard Militzer from the University of California, Berkeley. “It was a classic, spectacular way to end the mission.”

The Mysterious Asymmetry of Jupiter’s Asteroids May Finally Be Explained
AI Predicts We’ll Breach Our Climate Goal in Just 10 Years
Stunning Green Comet Will Be Closest to Earth Today, at Peak Brightness
Incredible ‘Fairy’ Robot Sails on The Breeze Like a Floating Dandelion
We Can Now Hear The ‘Sound’ of One of The Most Beautiful Stars