The 50th anniversary of You-Know-What is coming up and LEGO is getting in on the celebration. The much-beloved company has released a replica of the Apollo 11 Eagle Lunar Lander. The new lander is part of LEGO’s Creator Expert collection.

LEGO teamed up with NASA on this effort, and the model boasts quite a few realistic touches.

It was July 20th 1969 when the Eagle Lunar Lander carried astronauts Neil Armstrong and Buzz Aldrin to the surface of the Moon, making them the first humans to walk there.

Ten others walked on the Moon, all American astronauts, but Armstrong and Aldrin had the honor of being in the first mission to land there, with Armstrong setting the first human feet on the Moon.

This LEGO set is a tribute to those two astronauts, as well as Michael Collins and all of the NASA personnel who made the mission possible. 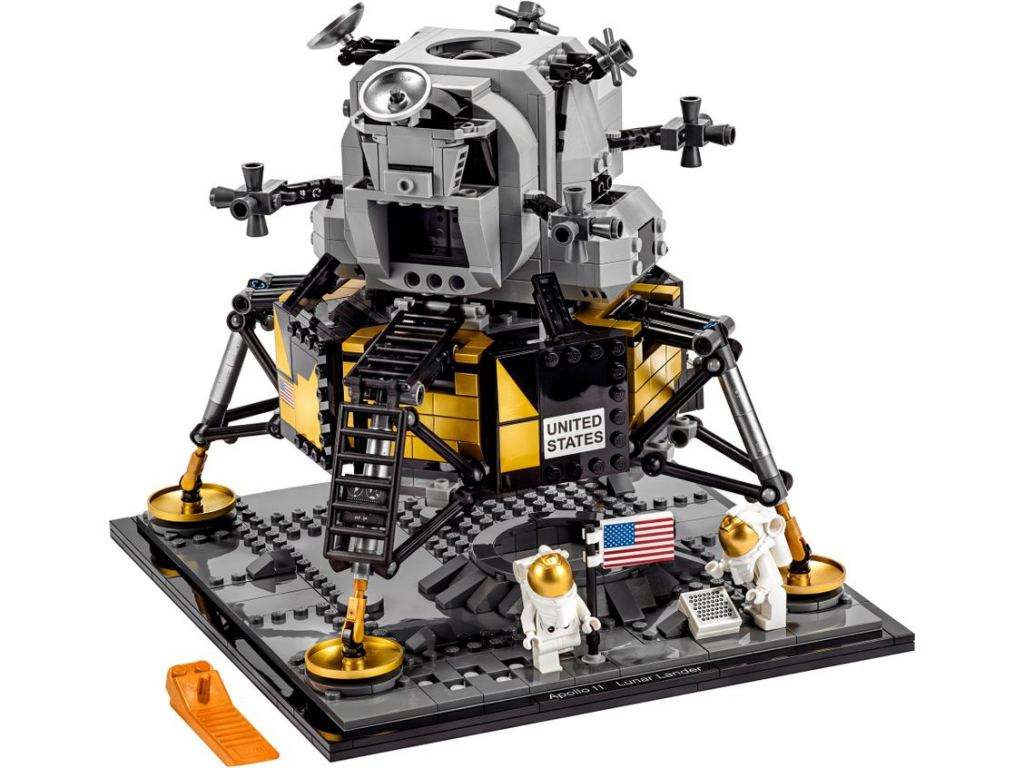 The copy for the lander says, “Celebrate space exploration with this highly detailed display model.” This is not really a toy for kids. It’s more of a collector’s item that space enthusiasts can use to decorate their den, office, or whatever other space they like.

The set features a descent and an ascent module that can separate from each other, two astronauts, a lunar surface, and of course an American flag.

The descent module has two opening bays, and a MESA (Modularized Equipment Stowage Assembly) lowering platform containing a LEGO TV camera that was used to televise Armstrong’s first steps on the Moon. 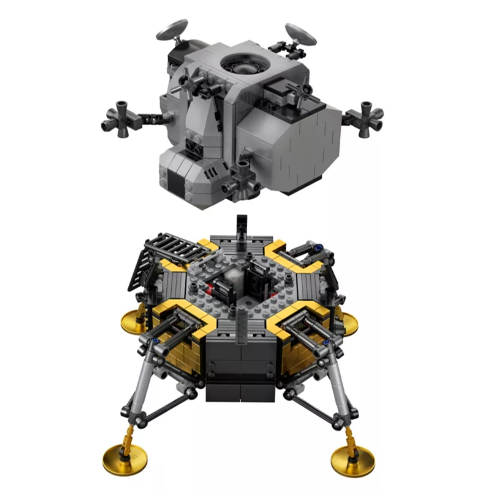 The ascent and descent modules separate from each other. (LEGO)

The second of the two opening bays represents EASER (Early Apollo Scientific Experiment Package) with a deployable representation of the LRR (Laser Ranging Retroreflector.) The LRR was the only instrument the Apollo 11 astronauts left behind on the surface of the Moon, and it’s still in use today.

The LRR is made up of 100 mirrors that are used to measure the distance from the Earth to the Moon. 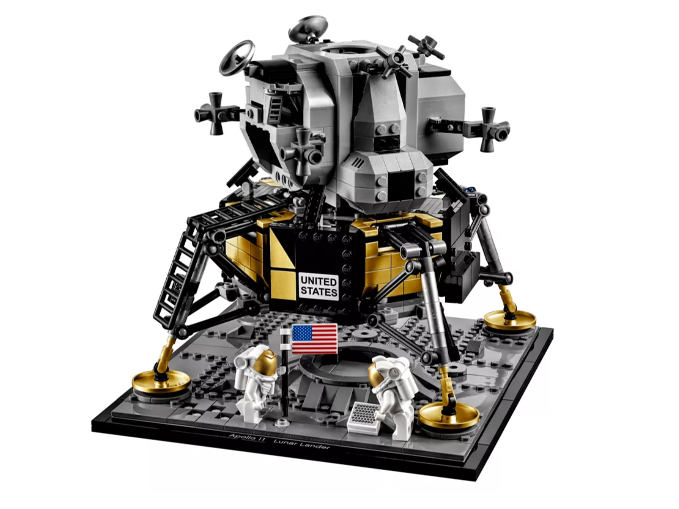 Neil and Buzz with the American flag and the Laser Ranging Retroreflector. (LEGO)

The Eagle lander featured a plaque with drawings of the Earth’s Eastern and Western hemispheres, and the LEGO lander includes that plaque as well.

The plaque with drawings of the Earth’s hemispheres. (LEGO/Wikimedia)

This isn’t the first Apollo 11 lander made by LEGO. There’s one from 1975 and one from 2003 as well. LEGO has also created other NASA themed sets, including the Saturn V Rocket, (which also contains an Eagle lander), a Women of NASA set, a NASA-inspired Rocket Assembly and Transport set, a Deep Space Rocket and Launch Control set, and a Lunar Space Station, among others.

This commemorative Eagle lander set will be a popular item, and LEGO seems to know this. On the ordering page, it clearly says “Limit:2.”

If you want one in time for the upcoming anniversary, you better go for it.

Many Cat Lovers Are Giving Their Cats Unwanted Affection, Study Suggests
Scientists Just Broke The World Record For The Most Powerful Stable Magnetic Field
Robot Shows It’s Possible to Swim Through The Emptiness of a Curved Universe
Scientists Put Trackers on Moths, And It Revealed an Incredible Journey in The Sky
Plants Have Been Keeping a Secret From Us About How Thirsty They Actually Are