Picture a spiral galaxy. You’re probably imagining something like Messier 34 – long, spiralling arms sweeping away from a brightly glowing centre, speckled with glittering star clusters and punctuated with dark streaks of dust.

But from our vantage point, galaxies can be oriented any which way, including edge-on – like NGC 5907, also known as the Knife Edge Galaxy, the gorgeous subject of a newly released Hubble Space Telescope image processed by citizen scientist Judy Schmidt.

As you can see in the image above, the spiral arms can’t be made out from this angle. Even most of the star clusters are obscured by thick galactic dust. However, we can infer that the galaxy is a spiral one because we can still see a bright glow in its centre.

This is the galactic bulge: a dense, tightly-packed spheroidal group of stars found in the centre of most spiral galaxies. Even the Milky Way has one. We can’t see what it looks like from the outside because – of course – we can’t leave our galaxy, but we can see what it looks like from inside and put together the rest based on our observations of other spiral galaxies.

NGC 5907, located around 50 million light-years away in the northern constellation of Draco, is actually an oddball in a few other ways. It has very low metallicity; analyses suggest that it’s mainly made up of hydrogen and helium, and not much else. In addition, very few giant stars have been detected in it.

Since heavier elements are produced over stellar generations, forged in supernovae whose dust is taken up in subsequent generations of stars, this suggests that NGC 5907 is mostly populated by very old, very long-lived dwarf stars. 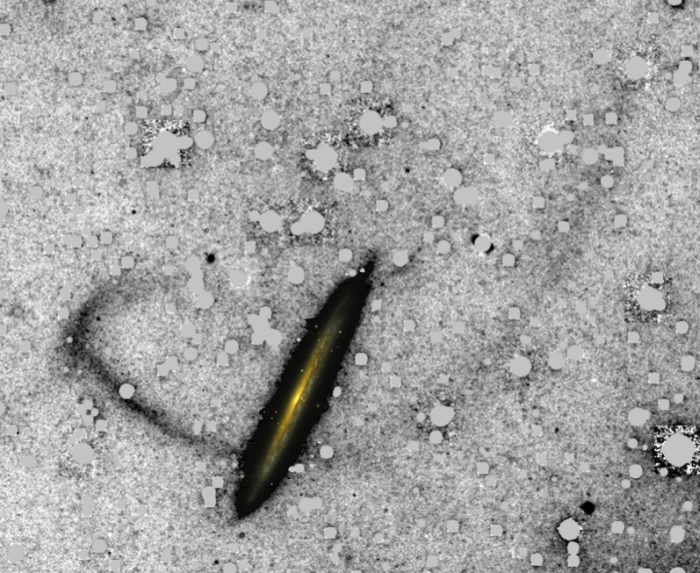 The other interesting thing about NGC 5907 can only be seen when you zoom out. There is a single giant stream of stars looping around it, over 700,000 light-years long, according to a recent study, and confirmed by independent observations.

Prior to these studies, NGC 5907’s stellar stream was thought to have a complex, corkscrewing shape with two loops.

There were two competing explanations for this. The first was that the galaxy subsumed a smaller dwarf galaxy orbiting it, much like the Milky Way is thought to be doing with the Sagittarius Dwarf Spheroidal Galaxy. The second was a major merger with a galaxy the same size as NGC 5907, around 8 to 9 billion years ago.

The more recent observations suggest a third scenario: a close encounter with a “tidally disrupting satellite” that extracted a stream of stars around NGC 5907.

However, a more comprehensive analysis will need to be conducted to identify the best match for the newly observed configuration.

It’s Possible Neanderthals Evolved So They Wouldn’t Smell Their Own Stink, Study Finds
Astronomers Studied More Than 5,000 Black Holes to Figure Out Why They Twinkle
Intriguing Meteorite From Mars Reveals ‘Huge Organic Diversity’, Scientists Say
Physicists Used Sound Waves to Give a Tiny Sun Its Own Kind of Gravity
A Hidden Food Web Exists in The Desert, And It Thrives on Death