Things are officially getting exciting. New science has just come in from the collaboration to photograph Sagittarius A*, the supermassive black hole at the centre of the Milky Way, and it’s ponying up the secrets at our galaxy’s dusty heart.

The image below is the best picture yet of Sgr A* (don’t worry, there’s more to come from the Event Horizon Telescope), and while it may look like just a weird blob of light to you, astrophysicists studying the radio data can learn a lot from what they’re looking at – and they think they’ve identified a relativistic jet angled towards Earth.

Because the image taken of the region is the highest resolution yet – twice as high as the previous best – the researchers were able to precisely map the properties of the light around the black hole as scattered by the cloud.

“The galactic centre is full of matter around the black hole, which acts like frosted glass that we have to look through,” astrophysicist Eduardo Ros of the Max Planck Institute for Radio Astronomy in Germany told New Scientist.

Using very long baseline interferometry to take observations at a wavelength of 3.5 millimetres (86 GHz frequency), a team of astronomers has used computer modelling to simulate what’s inside the thick cloud of plasma, dust and gas surrounding the black hole. 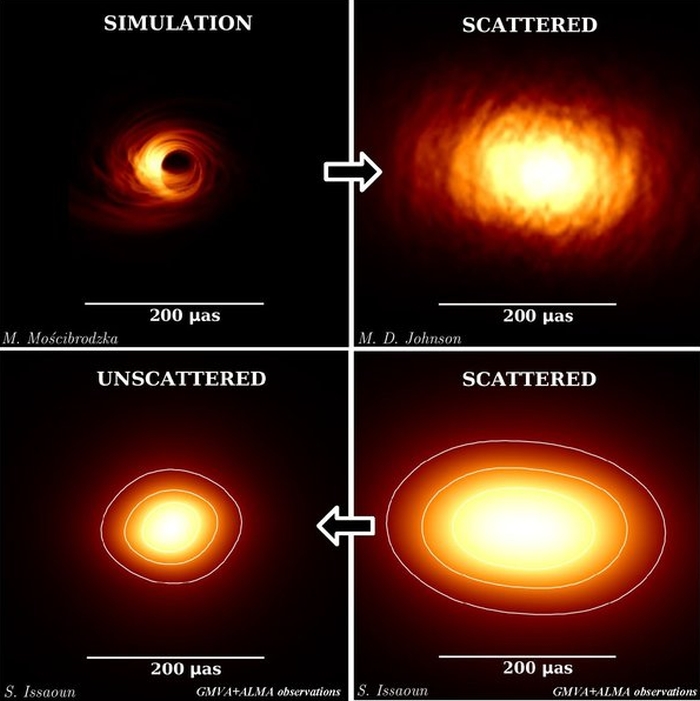 Above: The bottom right image shows Sgr A* as seen in the data. The top images are simulations, while the bottom left is Sgr A* with the scattering removed.

It revealed that Sgr A*’s radio emission comes from a smaller region than previously thought.

Most of it is coming from an area just 300 milllionth of a degree of the night sky, with a symmetrical shape. And, since black holes don’t emit detectable radiation on their own, the source is most likely one of two things.

“This may indicate that the radio emission is produced in a disk of infalling gas rather than by a radio jet,” said astrophysicist Sara Issaoun of Radboud University in The Netherlands.

“However, that would make Sgr A* an exception compared to other radio emitting black holes. The alternative could be that the radio jet is pointing almost at us.”

Active black holes are surrounded by a swirling cloud of material that’s falling into it like water down a drain. As this material is swallowed by the black hole, it emits jets of particles from its rotational poles at velocities approaching light speed.

We’re not quite sure how this happens, but astronomers believe that material from the inner part of the accretion disc is channelled towards and launched from the poles via magnetic field lines.

Since Earth is in the galactic plane, having a jet pointed in our direction would mean that the black hole is oriented quite strangely, as if it’s lying on its side. (Nearby galaxy Centaurus A, for instance, has jets shooting perpendicular to the galactic plane.)

But this orientation has been hinted at before. Last year the GRAVITY Collaboration described flares around Sgr A* consistent with something orbiting it face-on from our perspective – like looking at the Solar System from above.

So “Maybe this is true after all,” said Radboud University astronomer Heino Falcke, “and we are looking at this beast from a very special vantage point.”

Hopefully, when the Event Horizon Telescope releases the first images of Sgr A*’s event horizon – something we are expecting very soon – they will reveal more. And, in case you were starting to get worried, the 1.4-millimetre wavelength (230 GHz) will reduce the light scattering by a factor of 8.

This means the long-awaited picture of the shadow of a black hole will – hopefully – be breathtakingly detailed.

Meanwhile, studying data such as these help build a comprehensive picture of how these mysterious cosmic objects work.

“Understanding how black holes work … takes more than the picture of its shadow (although incredible in its own right),” Issaoun wrote on Facebook. “It takes observations at many different wavelengths (radio, X-ray, infrared etc) to piece together the entire story, so every piece counts!”

The team’s paper has been published in The Astrophysical Journal, and can be read in full on arXiv.

Are Your Cats Playing or Fighting? Researchers Think They Can Tell The Difference
AI Predicts We’ll Breach Our Climate Goal in Just 10 Years
This Small Australian Marsupial Is Quite Literally Dying For Sex
AI System Detects Strange Signals of Unknown Origin in Radio Data
Lightning Strikes Create a Strange Form of Crystal Rarely Seen in Nature