The road to reusable space rockets was always going to be a bumpy one, such are the technical challenges involved. SpaceX has been making excellent progress, but just had its latest bump – having its central Falcon Heavy booster fall over in choppy seas off the coast of Florida.

The booster rocket had successfully touched down on the SpaceX drone ship – called Of Course I Still Love You – but came crashing down after the vessel was hit by swells of up to three metres (10 feet) on its way back to base.

Thankfully, this is still better than the last time, when the booster splashed right into the sea. A tweet by SpaceX boss Elon Musk suggests some parts of the rocket might be recovered and used again.

The mission marks the first time SpaceX has successfully managed to land all three parts of the Falcon Heavy rocket on reentry to Earth, even if the central core booster didn’t fully survive its boat trip.

For reasons of efficiency, safety and fuel limits, the other two side boosters that make up Falcon Heavy were able to return to landing pads at Cape Canaveral, near where the rocket had blasted off.

The central core booster has to be recovered at sea, as SpaceX only has two landing pads on land, and a sea recovery takes less fuel than a land one. In the only previous Falcon Heavy mission to date, this booster missed the drone ship completely and slammed into the sea, so SpaceX is still making progress.

“Over the weekend, due to rough sea conditions, SpaceX’s recovery team was unable to secure the centre core booster for its return trip to Port Canaveral,” SpaceX told The Verge in a statement.

“As conditions worsened with 8-to-10 foot swells, the booster began to shift and ultimately was unable to remain upright. While we had hoped to bring the booster back intact, the safety of our team always takes precedence. We do not expect future missions to be impacted.”

That note of optimism about future missions is because next time around, SpaceX has hinted that it will have a new and improved octograbber – the contraption that grabs and hangs on to the smaller Falcon 9 booster that SpaceX also recovers at sea. 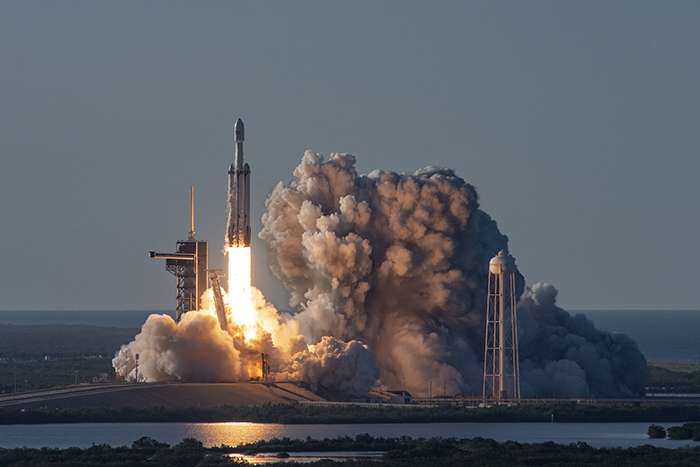 It started well enough… the Arabsat-6A mission takes off. (SpaceX)

The Falcon Heavy uses a different design to the Falcon 9, so the octograbber couldn’t be used this time around – which probably didn’t help attempts to keep the rocket booster upright on top of the ship.

When reusable rockets do finally become the norm, the savings in costs will be huge. That should mean more opportunity to explore space and bolster the technology already spinning around our planet’s orbit.

Last time around the Falcon Heavy payload included a Tesla Roadster. This time, the rocket put the Arabsat-6A communications satellite into orbit. Built for Saudi Arabian company Arabsat, it was the first commercial payload sent into space by SpaceX.

The next mission for the Falcon Heavy – with a newly fitted core booster and two previously used side boosters – will take off later this summer in Florida. Let’s hope on this occasion all three parts of the megarocket make it safely back to base.

Plants Have Been Keeping a Secret From Us About How Thirsty They Actually Are
Scientists Discover An Immense, Unknown Hydrocarbon Cycle Hiding in The Oceans
Scientists Say ‘Space Bubbles’ Could Shield Earth From The Sun, But Would It Work?
For The First Time, Scientists Have Named a Heat Wave. Here’s Why It’s a Big Deal
It Really Is in Your Head: Thinking Hard and Long Can Cause Brain Drain