It’s easy to take for granted the detailed, almost real-time knowledge of Mars that we have at our fingertips. After all, in the not-too-distant past, Mars was largely mysterious. All we had were ground-based images of the planet. Now? Now we have daily weather reports and images of dust storms.

Martian dust storms are one of the big three Martian phenomena that most people know about. They’re right up there alongside Valles Marineris and Olympus Mons.

Sometimes the storms grow to become global in nature, and last year one ended Opportunity’s mission on Mars. But even though they’re not all global, understanding them is important to understanding Mars.

One of the orbiting spacecraft keeping an eye on Mars and its dust storms is the ESA’s Mars Express. Mars Express has been at work since 2004, helping us understand many of the fundamental aspects of Mars’ atmosphere, geology, and surface environment, among other things.

Lately, (when it’s not busy looking for methane spikes) Mars Express has been keeping an eye on dust storms at Mars’ north polar region.

Mars Express has spotted a number of local dust storms – and larger regional ones – forming in the northern latitudes and dissipating towards the equator. Between May 22nd and June 10th, it saw eight of them. These storms had very short lifespans, forming and then dissipating between one and three days.

It’s spring in the north right now, and these types of storms are normal at this time of year. They form on the edge of the polar ice cap during its seasonal retreat. It’s not only dust storms that are forming, but clouds of water ice too.

The GIF (above) was made from images of another storm captured by the VMC over a period of 70 minutes on 29 May. This one started on 28 May and continued to around 1 June, moving towards the equator during that time.

The next image is a montage of four images covering three separate dust storms. The last two images show the same storm as it evolved over several days and moved toward the Martian equator. These are from the HRSC on the Mars Express Orbiter, taken at an altitude of about 10,000 km (6200 miles.) The montage also shows clouds of water ice (white) forming over the margin of the polar cap.

If you look closely, you can see water ice clouds forming further to the south, over Olympus Mons and Elysium Mons. It’s pretty cool to see the shapes that the dust storms take, and all of the other cloud activity too. 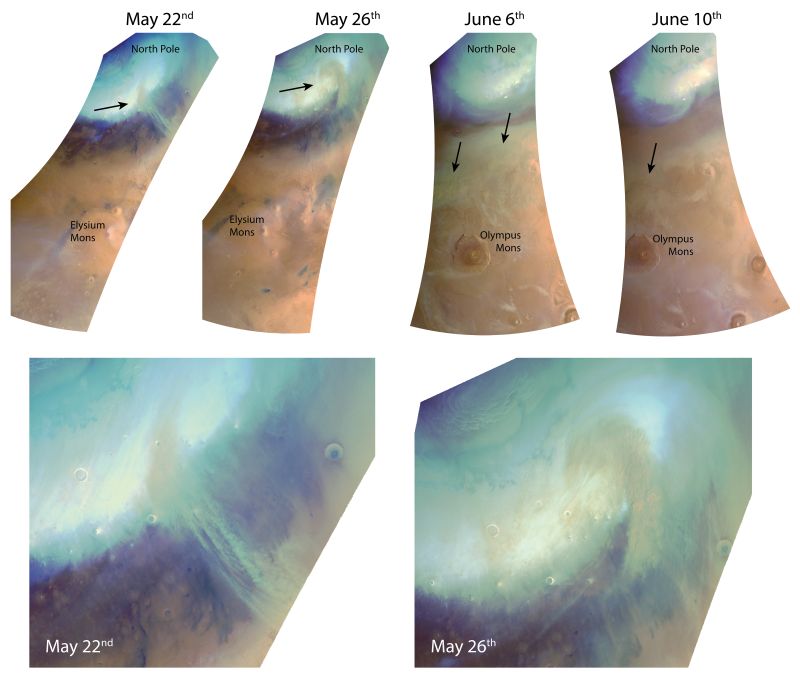 In the bottom pair of images, the Mars Express Orbiter worked together with NASA’s Mars Reconnaissance Orbiter and that spacecraft’s MARCI (Mars Color Imager.)

The clouds that form at Olympus Mons and Elysium Mons are called orographic clouds. They form on the leeward side of the ancient volcanoes. But as the dust storms move in, the air is heated and the orographic clouds disappear.

Eventually, these local and regional dust storms dissipate. Greater atmospheric circulation patterns take over, and the dust is spread into a thin haze in the atmosphere, at altitudes between 20 to 40 kilometers (12.5 to 25 miles).

If you’re particularly interested in Martian dust storm activity, you’re in luck. The ESA has both Twitter and Flickr accounts for images from the Express Orbiter’s Visual Monitoring Camera.

It’s fascinating to be able to hop on the internet and look at a stream of images from another planet. If it’s something you’ve grown up with, lucky for you. But if you’re not exactly a spring chicken anymore, then this kind of thing can be absolutely engrossing.

Of course, this is more than just eye candy. As we humans build a greater and more consistent presence on Mars, understanding the climate is important for planning missions.

And for keeping Matt Damon out of trouble.

A Nuclear War Could Starve Billions, But One Country May Be Safer Than The Rest
This Seemingly Simple Foot Feature May’ve Allowed Sauropods to Become Giants
Scientists Put Trackers on Moths, And It Revealed an Incredible Journey in The Sky
This Arctic Fish Is Packed to The Gills With Antifreeze, Scientists Discover
Scientists Say ‘Space Bubbles’ Could Shield Earth From The Sun, But Would It Work?