There’s more than one way to look at a galaxy. Once you strip out all the lowest-energy electromagnetic radiation, you’re left with the most powerful processes the Universe can muster.

This is the Southern Pinwheel Galaxy, or Messier 83, located around 15 million light-years away in the Southern constellation Hydra. And you are looking at the X-ray radiation emanating from the galaxy’s most energetic events – stars being born, stars dying, and black holes gobbling up matter.

Although it’s only about half the size, M83 is a lot like the Milky Way, with a similar barred spiral structure. It’s also one of the closest spiral galaxies; with its flat side facing us, we have a really good view. So astronomers study it to try and understand our own galaxy.

Like the Milky Way, M83 is forming new stars. In our own galaxy, three to four solar masses’ worth of material goes into star formation every year, producing up to an estimated seven or so baby stars. M83 is also producing a handful of stars every year.

Star formation is an intense process that generates a lot of radiation, but it can be hard for us to see, especially 15 million light-years away. That’s where the European Space Agency’s XMM-Newton X-ray space telescope comes in, as it’s optimised for picking out high-energy X-rays.

When turned to the galaxy, it sees star formation as bright spots speckled across the galaxy. But that’s not all it sees. Other cosmic processes also produce a high amount of radiation. 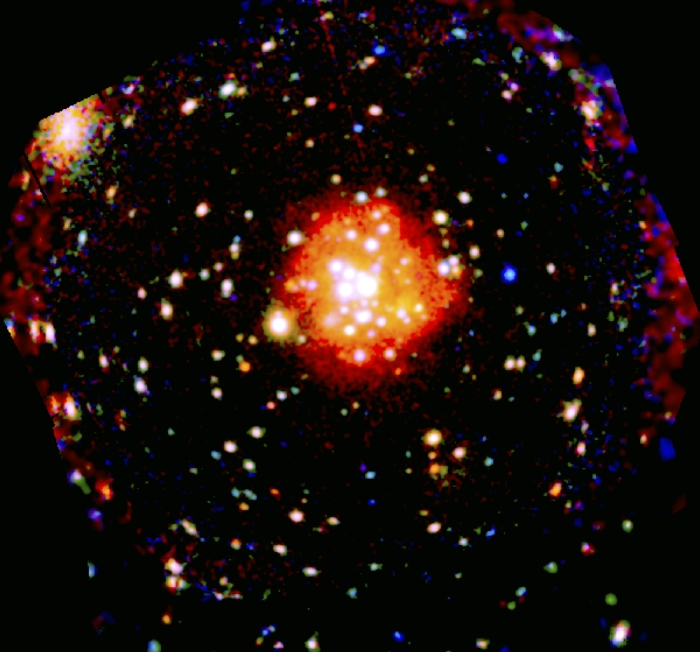 In fact, most of the bright dots you see in this image are processes that occur towards the end of a star’s lifespan.

The supernova explosions that mark the end of the life of massive stars as they collapse into neutron stars and black holes are extremely powerful, for instance. Binary systems where one object is a black hole or neutron star can also produce powerful X-rays, when they’re actively accreting matter off their companion.

When combined, as in the animation below, the images allow scientists to study changes over time.

At approximately 8 o’clock just outside the red region is a very bright spot indeed – barely changing over the years. That’s what is known as an ultra-luminous X-ray source (ULX).

Astronomers believe this particular ULX is a binary with either a neutron star or black hole that is accreting matter from its companion at an exceptionally high rate.

These images are a truly rare glimpse into the workings of a galaxy, one we wouldn’t see with our own eyes. But there’s one more cool thing about M83 – it’s so bright, it can be possible to view it in our night sky with the help of binoculars.