The European Space Agency’s (ESA) Rosetta mission spent two years at the comet 67P/Churyumov-Gerasimenko. At the end of September 2016, its mission was ended when the spacecraft was sent on a collision course into the comet.

During its time at comet 67P, it captured a vast amount of images.

The ESA made all those images freely available at their Rosetta website, and now an astro-photographer working with those images has found something interesting: a chunk of ice travelling through space with 67P.

The amateur astronomer who did the sleuthing is Jacint Roger from Spain. (Roger’s work is pretty cool. Check it out.)

Roger created a gif from a series of processed Rosetta images, and the gif brought 67P’s icy companion into focus.

The images in the gif are from a couple months after perihelion, which was in August, 2015. At that point, 67P was basking in the full light of the Sun. The Sun’s heat released gases from the comet into space, and dust was carried along with the gases. As a result, the comet was inside a huge shroud of dust.

But 67P’s close encounter with the Sun didn’t just release dust: the tiny icy chunk was also expelled from the comet during perihelion. 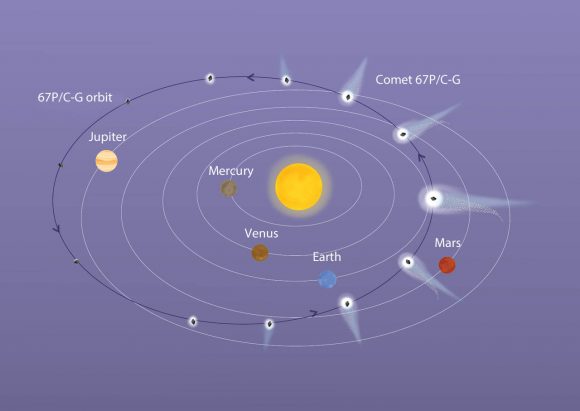 The orbit of 67P. (ESA/Universe Today)

The gif is from images that focus on the comet’s nucleus, and as a result, the tiny icy body is visible. The tiny chunk, which is likely less than 4 meters (13 ft) in diameter, is now called the “Churymoon” thanks to Julia Marín-Yaseli de la Parra, who coined the term.

She’s a researcher with the ESA who worked on the Rosetta mission, and is now getting her PhD in Cometary Sciences.

The images that Jacint Roger used are from Rosetta’s OSIRIS instrument. OSIRIS had two cameras, a wide-angle camera (WAC) designed to map the gas and dust near the comet, and a narrow-angle camera (NAC) designed for high-resolution mapping of the comet’s nucleus.

The gif is made up of images from the NAC. When these images were captured, Rosetta was over 400 km (250 miles) from the comet’s center.

Now that the tiny Churymoon has been spotted, scientists with the Rosetta and OSIRIS teams are studying it more closely.

According to their work, the Churymoon spent its first 12 hours after leaving the comet in an orbital path around 67P at a distance between 2.4 and 3.9 km (1.5 and 2.4 miles) from the comet’s center. After that, it passed through the coma. The coma’s brightness made it hard to see the Churymoon.

Further observing saw the tiny body emerge on the other side of the comet’s coma. Those observations were consistent with the first ones, and they confirmed the tiny chunk’s path around the comet, at least until 23rd October, 2015.

Part of Rosetta’s mission to comet 67P was to track and study debris that was ejected from the comet. This tiny Churymoon is likely the largest chunk of debris yet detected. It’ll be the subject of further investigation by scientists.

Rosetta’s mission was to watch a comet as it went through perihelion. It took ten years to travel to 67P/G-C. Its surprising discoveries advanced our knowledge of comets in a big way. Prior to Rosetta, comets were thought of as dirty clumps of ice hurtling through space. Rosetta revealed the complexity of its target, and by extension, the complexity of comets in general.

Rather than static bodies, scientists now know more about their geological complexity. Perhaps the most surprising result is that 67P is likely the result of a collision between two comets.

According to Eberhard Grün, an interdisciplinary scientist working on the Rosetta mission, comets like 67P/G-C are “geologically complex worlds where a myriad of processes are at work creating the incredible surface structure and activity of the comet.”

With this new discovery, Rosetta’s complexity is all the more intriguing.